On Willa Cather and the desire to be seen. 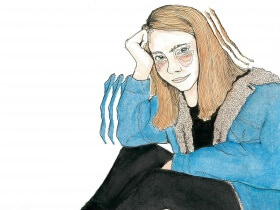 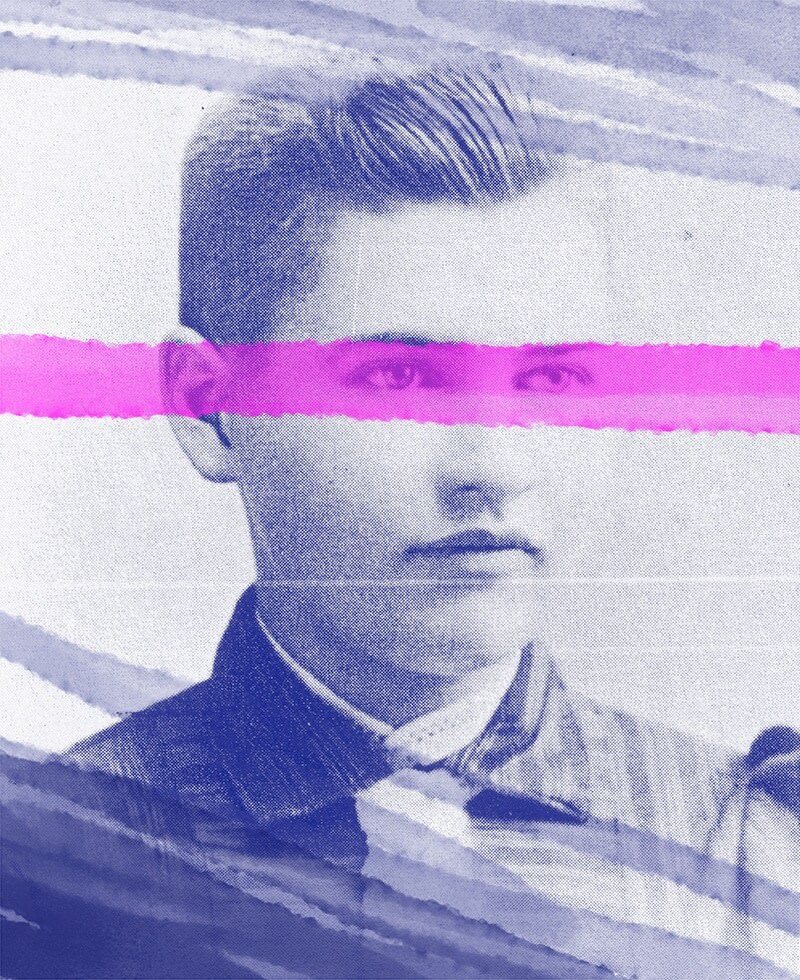 Alexis Stephens wrote for Rookie about being on Jeopordy!’s Teen Tournament, and about how her whole neighborhood turned their eyes on her when she made it onto the show:

On my walk home from school, scrawny elementary school kids came up to me and politely asked how I got to be so smart. It was heartbreaking, terrifying, and adorable, but it felt like such a cop-out to numbly give advice like “Remember to study” or “Do your homework,” when what I really wanted to say was “Read when you feel lonely,” or “Don’t ever let anyone tell you what hobbies or interests to have.”

Sometimes, this line goes through my mind like a prayer: “Read when you feel lonely.” 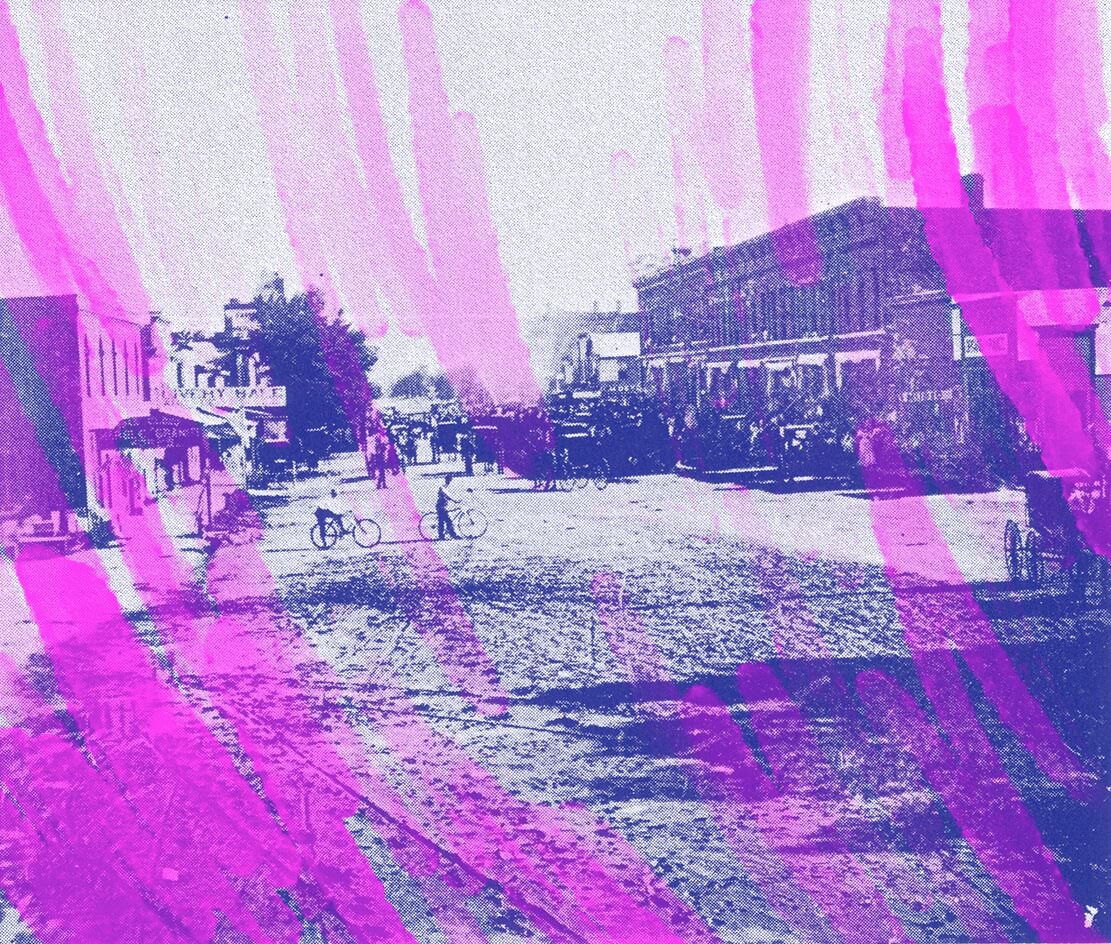 In Willa Cather’s 1915 novel The Song of the Lark, the young Swedish-American girl, Thea Kronborg grows up with a big family in the small desert town of Moonstone, Colorado during the 1800s. Thea escapes the chaos of her house—with all her brothers running around—in little drips and drops: “The clamor about her drowned the voice within herself.” She studies piano with the old German professor Wunsch, and he and a few others notice special qualities in Thea: “…she had both imagination and a stubborn will, curiously balancing and interpenetrating each other…She had the power to make a great effort, to lift a weight heavier than herself.”

(I should note that if the idea of Destiny feels heavy, that is equally chill and valid—the writer Margaret Atwood, for example, said recently that her junior high English teacher said, in retrospect, that Atwood “showed no particular ability in her class.”) 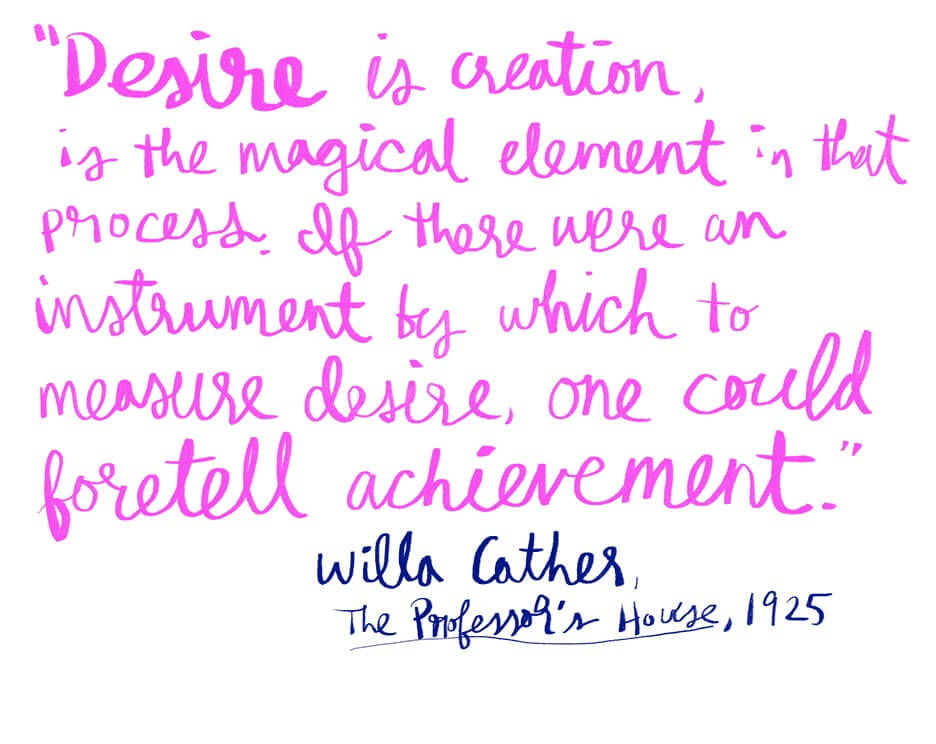 One day, Thea claims a little upstairs room for herself, her first room she wouldn’t have to share. Her brothers don’t want it, because the night winds come in strong. She heats a brick in the oven each night to warm her feet in bed: “In the end of the wing, separated from the other upstairs sleeping-rooms by a long, cold, unfinished lumber room, her mind worked better…She had certain thoughts which were like companions, ideas which were like older and wiser friends.” Cather wrote this over 10 years before Virginia Woolf addressed a crowd and said that, “a woman must have money and a room of her own if she is to write fiction.”

Cather teases out the threads of Thea’s sexuality in the narrative, but it’s a quiet, suggested awakening, having more to do with the feeling of breath in her lungs and hearing music than connecting one’s desires to a specific person. Cather nudges the reader. Her descriptions exude a deliciousness. On a walk with Dr. Archie, an older friend, they see “a little rabbit with a white spot of a tail, crouching down on the sand, quite motionless. It seemed to be lapping up the moonlight like cream.”

The space of the desert town rolls out before Thea, and its expanse suggests a space to blossom. Cather writes:

When she went home, it was not to sleep. She used to drag her mattress beside her long window and lie awake for a long while, vibrating with excitement, as a machine vibrates from speed. Life rushed in upon her through that window—or so it seemed. In reality, of course, life rushes from within, not from without. There is no work of art so big or so beautiful that it was not once all contained in some youthful body, like this one which lay on the floor in the moonlight, pulsing with ardor and anticipation.

Lewis Hynde writes in The Gift of how the poet Walt Whitman takes in the world, inhales, considers himself a part of everything. In “Song of Myself” from Leaves of Grass (1855), Whitman writes: “Sea of the brine of life and of unshovell’d yet always ready graves, / […] / I am integral with you.” Whitman and Cather saw the creative process, and even the process of living itself, as one that begins with drinking in before anything can come pouring out. Whitman suggests that this fallow period marks a death that we endure before the next stage of selfhood takes place. When we get to the other side of that change, that’s when we find a voice, that’s when we write poetry and sing and draw comics and make films. But it is only listening that allows us to reach that place. D.C. Lau’s 1963 translation of Lao Tzu’s Tao Te Ching says: “The way is empty, yet use will not drain it. / Deep, it is like the ancestor of the myriad creatures. Emptiness in art carries things for us—emotions and memories and questions and ambiguities.

Cather named her first prairie novel, O Pioneers!, after a line from Leaves of Grass, and in her 1918 novel My Ántonia, the protagonist speaks this Whitmanesque sentiment, “that is happiness, to be dissolved into something complete and great. When it comes, it comes as naturally as sleep.”

Cather would allow herself to write about a more channeled, directly-focused sexuality in 1918 with My Ántonia. Cather makes use of a male narrator-protagonist, Jim Burden, to express intimate admiration for the tough prairie women she grew up with in Red Cloud, Nebraska. Cather had close relationships with women throughout her life, and during a period at the University of Lincoln, she cropped her hair short and went by the name William (pictured above right). 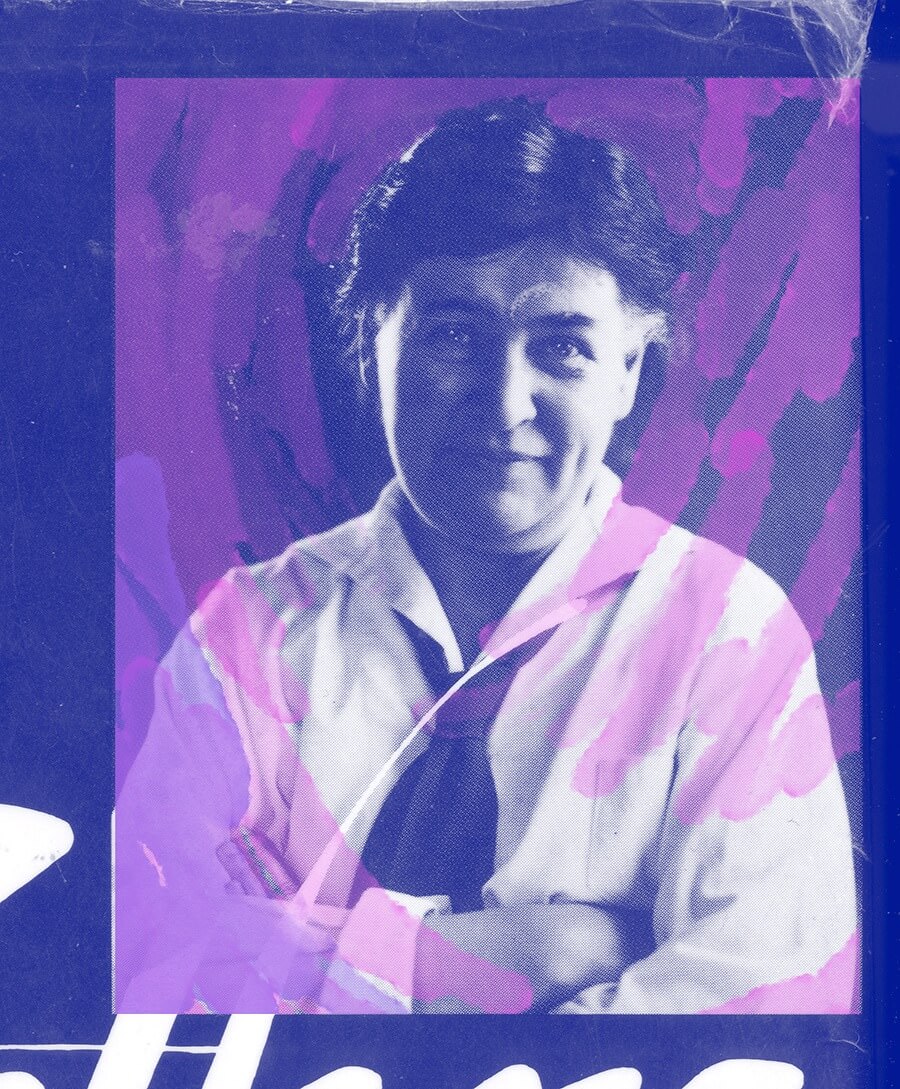 Photo by Edward Steichen, scanned from a jacket design by R.D. Scudellari.

Cather based Thea partially on her friend Olive Fremstad, a Swedish-American opera singer. When I saw my little sister in New York last December, I gave her a copy of the book, since she studied opera in Chicago just as Thea eventually does. Thea travels there to study piano, which leads to singing. Also, Thea often sings in German, Wagnerian pieces, and my sister is studying opera in Hamburg, Germany.

In part one of the book, titled “Friends of Childhood,” Thea takes in the experiences she will later draw on as an artist. Because Thea grows up in a small Midwestern town, as Cather did, it’s hard not to draw autobiographical connections. Several of Cather’s pieces, like the 1905 short story “The Sculptor’s Funeral,” spit venom on hidebound, provincial mindsets about art and artists. Thea recognizes how stuck she feels growing up in Moonstone, even while the desert and her friends there give her life. 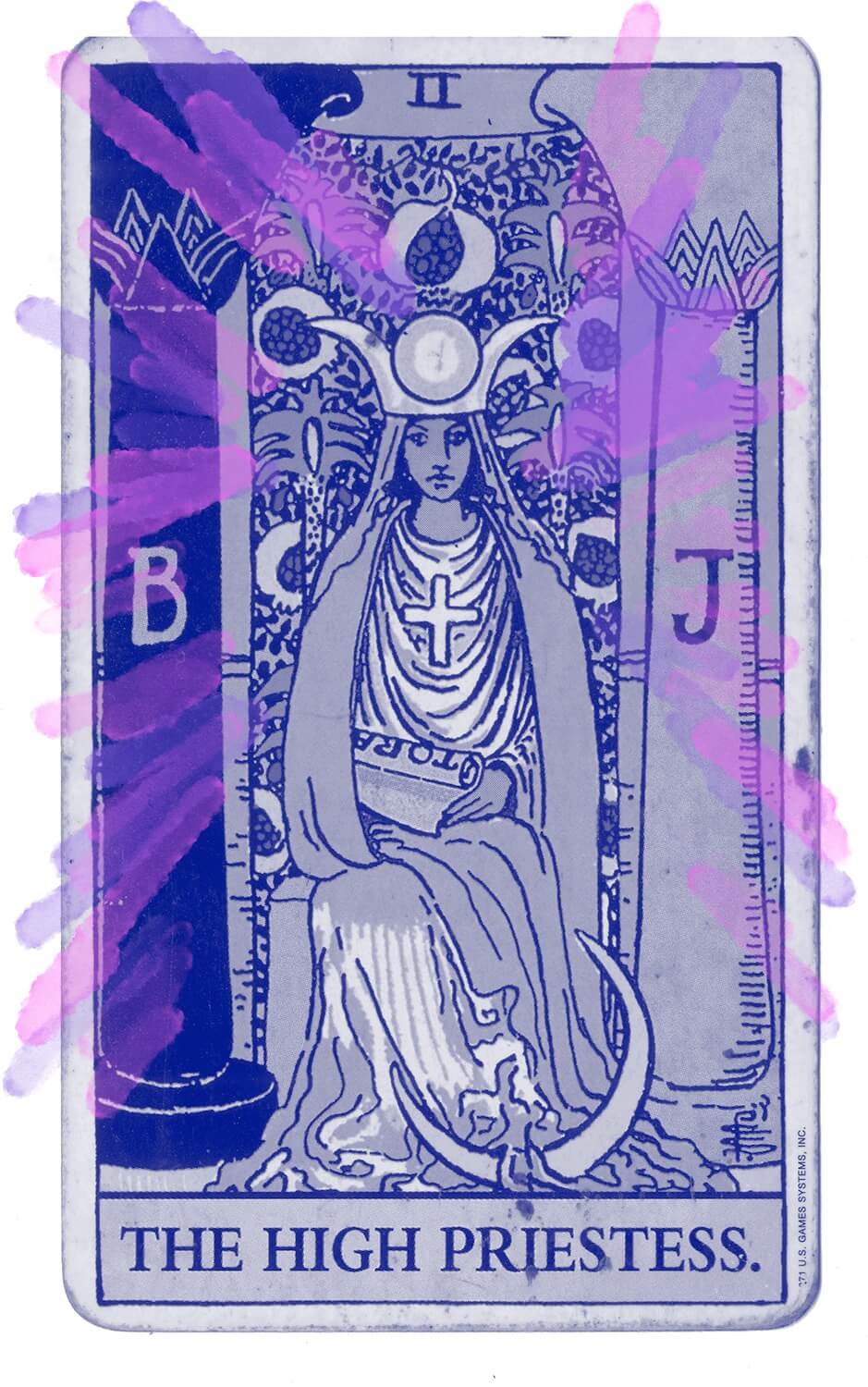 Thea acts a little bit like the High Priestess in a Tarot deck. The trans Tarot expert and comic book writer Rachel Pollack writes in her book Tarot Wisdom that Pamela Colman-Smith’s drawing depicts the High Priestess as her robes partially obscure the Torah, denoting mystery. She sits between two columns, signifying duality and balance, with her eyes forward in a meditative state. Colman-Smith, Cather, Pollack, and Whitman all see that potential can sometimes only be seen and tapped into by inaction. My friend Jess, who often reads my Tarot for me over Skype, always reminds me that passivity can be an active choice.

I shed this snakeskin. Was the one I had on before, was that me? How about the one I have on now? What about when I shed that skin, and become whatever I will be next?

Every time I look for a book or a movie or an album or a comic to hold something, I’m looking for it to say one thing: I see you.

I saw a quote printed up on the door of the bathroom at Giovanni’s Room, a bookstore in Philly that is also the oldest queer bookstore in the country: 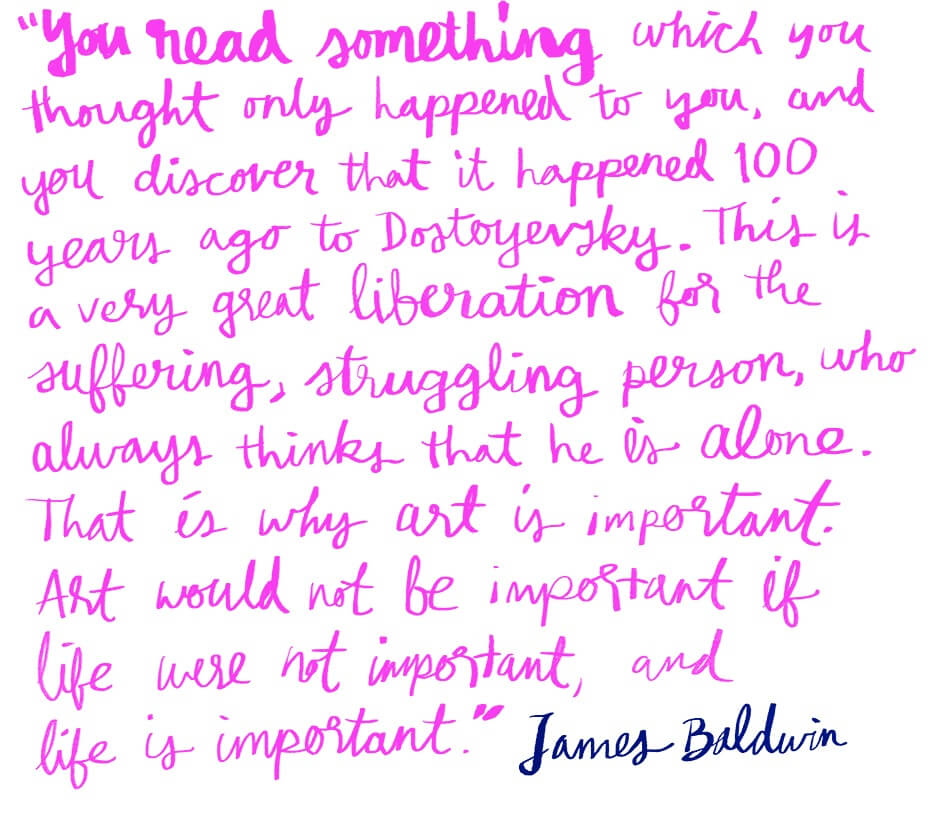