It’s realer than we think. 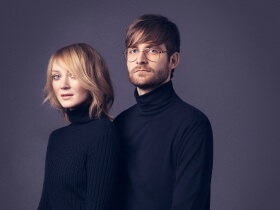 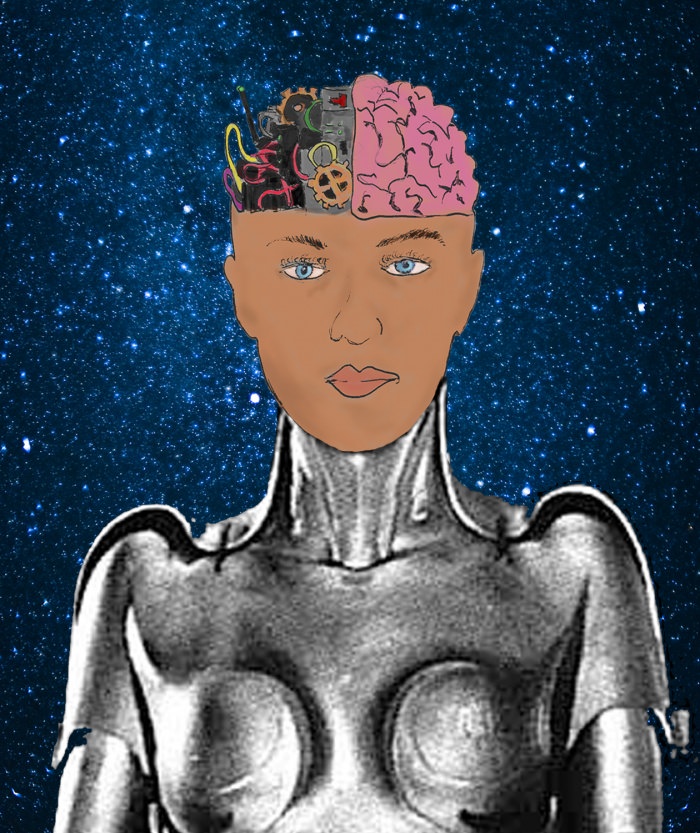 It sometimes feels like we’re sitting around waiting for Artificial Intelligence (A.I.) to “happen.” I think, unconsciously, most of us are expecting a big, earth-shattering moment when a fully articulated robot is revealed—one that looks and sounds human. TA-DA! A.I. has arrived! Except, surprise! A.I. is already here.

If you watch a movie or show with an artificial intelligence in it, that A.I. typically is a humanoid robot. They are shaped like us, and speak like us. There are some exceptions, like in Her, (an excellent, I think) movie about a guy who falls in love with his computer’s human-sounding operating system. For the most part, though, the general public associates A.I. with robots resembling actual people. This goes back as far as the silent film Metropolis in 1927, the science fiction movies of the 1950s, and, of course, The Jetsons, which introduced us to one of the most iconic A.I.s of all time: Rosie the robot maid. 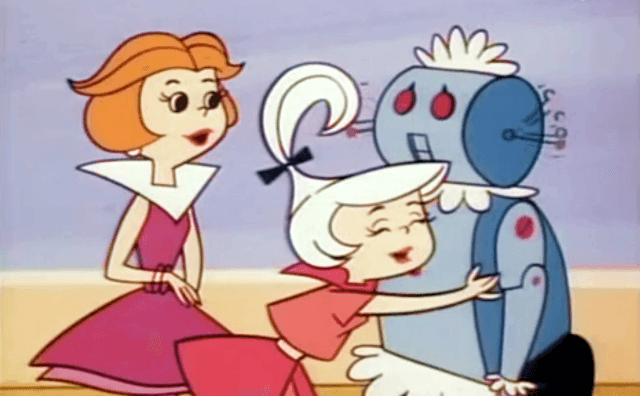 While we don’t have robotic maids yet—unless you count the Roomba—we do have fairly sophisticated A.I. that exists all around us. We just take it for granted because (other than Siri) it doesn’t usually talk to us like a person, or act/look like a person.

There is a name for taking advances in A.I. for granted, and then discounting them as not “real” intelligence. It’s called the “A.I. effect.” Nick Boström, a Swedish philosopher who studies human enhancement ethics, sums it up like this: “A lot of cutting-edge A.I. has filtered into general applications, often without being called A.I., because once something becomes useful enough and common enough it’s not labeled A.I. anymore.” And A.I. researcher Rodney Brooks has said, “Every time we figure out a piece [of A.I.], it stops being magical; we say, ‘Oh, that’s just a computation.'”

At what point will we finally recognize “computation” as “thought”? Where do we draw the line? Our reluctance to acknowledge artificial intelligence as actual “intelligence” may stem from a need to feel “special” in the universe, and superior to machines. It’s probably the same reason why some people continue to discount animal intelligence, despite loads of evidence that many animals are incredibly smart and deserve our respect.

Here are some examples of A.I. in everyday life that we don’t really recognize as being A.I.:

Facial recognition. For facial recognition technology to work, the computer has to learn how to “see” faces and understand that these are eyes, this is a mouth, these are ears, et cetera. For a program to understand where someone’s face is and to make out its features is now considered pretty basic, but this just shows how quickly we adapt to changes in A.I. 15 years ago, this was groundbreaking; now it’s in everyone’s phones. (Rainbow puke on Snapchat? You did that using facial recognition A.I.). Today, Facebook has artificial intelligence that not only recognizes what is a face, but matches it to an actual person among the 1.44 billion people who use Facebook. This is a crazy-“smart” artificial intelligence that most people don’t even think about.

Music composition. Artificial intelligence can write music in different musical styles. There are also programs that can add drums and bass to music you create yourself.

Driverless cars. Some form of driverless or “smart” cars will be here soon. The fully automated driverless car has to make something like 24 trillion A.I. operations per second to be as good as a human driver. They are an incredible artificial intelligence that most people will just see as “the new car.”

Humans’ reluctance to recognize intelligence that is non-human could be our downfall. It’s easy to imagine that we’ll continue to deny that machines can be as intelligent as us, until they have become so intelligent that they have wiped us from the Earth. Just sayin’! ☺ —Maggie

Before pew-pewing their way across a galaxy far, far away in Star Wars: The Force Awakens, Oscar Isaac and Domhnall Gleeson were in one of the best (perhaps even the best) and most cerebral sci-fi movies of 2015: Ex Machina.

Written and directed by 28 Days Later scribe Alex Garland, Ex Machina is about strong A.I., a theoretical (at this point in time) type of artificial intelligence that has the same intellectual capabilities as humans. While this topic, particularly the apparent inevitability of a robo-rebellion as A.I. becomes “stronger,” may be one of the most prevalent in the sci-fi genre, Ex Machina puts a truly original spin on the theme. It tells a story that is both a philosophical exploration of human consciousness and a terrifying, slow-burn thriller.

The movie begins on the Willy Wonka tip, with Caleb (Gleeson), a computer programmer, winning a contest to meet Nathan Bateman (Isaac), the reclusive, mega-genius head of the Google-esque company that he works for. Caleb is flown to the tech developer’s chic, ultramodern house/fortress, presumably thinking that he and Nathan are going to have a several-days-long slumber party gabfest while chilling in high-class, smart-house luxury. But when he arrives, Caleb learns that he’s actually been brought there to test whether or not a highly advanced A.I. that Nathan has been secretly working on functions in a way that’s believably human.

The A.I. is named Ava (Alicia Vikander) and her body is a striking mixture of metal, organ-like wires that run through a translucent torso and hyper-realistic synthetic skin. 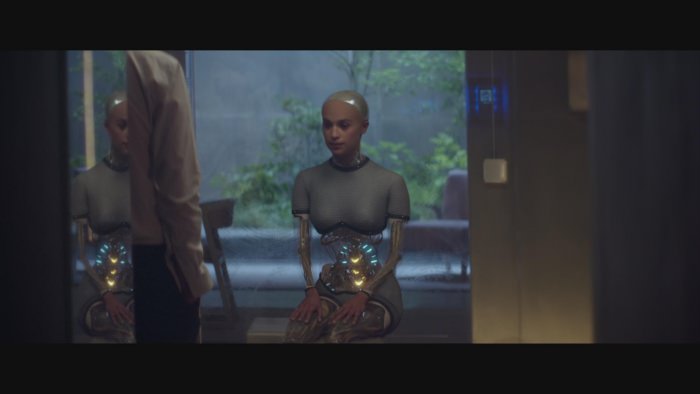 The design is one of the coolest and most imaginative aspects of this movie. Ava looks bomb (and anyone who can successfully fabricate an Ava suit and then cosplays as her deserves infinite high-fives and burrito parties), but the design also serves a greater purpose. Ava’s body is a kind of trick that muddles Caleb’s—and our—perception of her. She is unmistakably machine, but she’s machine in a very human way. So while so many A.I. movies pit human against machine (think Terminator, The Matrix, The Avengers: Age of Ultron), Ex Machina cleverly and subtly messes with that dichotomy and our allegiances.

The writing is on point from start to finish, and anyone who wants to be a storyteller, regardless of whether you’re drawn to sci-fi, should watch this movie. Garland is a master of taking familiar sci-fi/fantasy themes like the end of days (28 Days Later; Sunshine) and creating these evocative, smart, and moving meditations on the human condition in general, and survival in particular. One of the issues that Ex Machina contends with is our ethical obligation to the A.I. that we create. If we develop a computer that is virtually indistinguishable from a human in the way that it behaves or functions, is that computer then deserving of the same kinds of rights and freedoms that humans have? Is that computer alive? There are certainly other movies and TV shows that grapple with this idea to some extent (Battlestar Galactica is the one that immediately comes to mind), but Ex Machina does this in a way that is so crafty that I was honestly haunted by those questions after I left the theater.

There are so many compelling layers to this movie. There are comedic notes, and there are moments of genuine horror. Thematically, it deals with technology dependence and the male gaze. All of those elements seamlessly blend together in a mesmerizing experience. —Amber ♦

Got a burning, tech-related question? Send it to us…through cyberspace! Write to [email protected] with your NAME, AGE, CITY/STATE, and we’ll do our best to answer, explorers.