An album premiere, plus thoughts on how bragging can be a good thing. 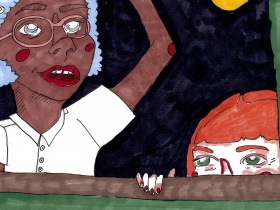 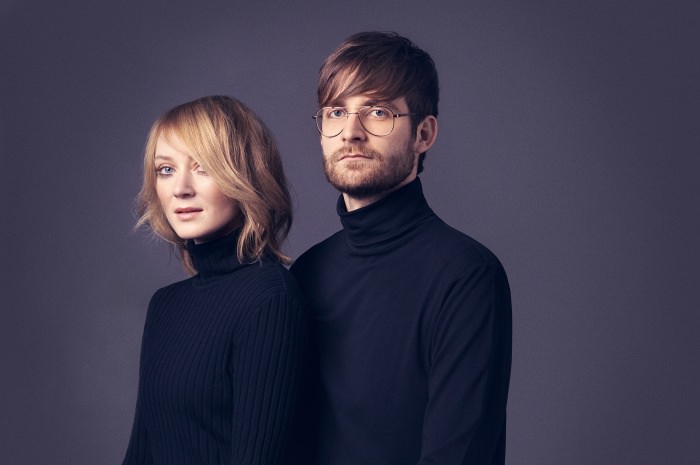 When I skyped with Philco Fiction’s Turid Alida Solberg and Andreas Lønmo Knudsrød, they were just getting their first copies of their new record, Talk/Brag, on vinyl. Understandably, they were stoked. After getting their start 10 years ago, Solberg and Knudsrød have spent the last decade honing a sound that’s entirely theirs. They also took their time to make a record that they (sometimes) considered walking away from. But they didn’t! And after nearly three years of writing, recording, and even tossing out music they didn’t like, they have Talk/Brag, an album we’re super excited to share here:

I talked to Turid and Andreas about the album, their highly stylized photos, and the cat they’ve been photographed with. They were kind enough to answer my questions, even after I thought Oslo was in Sweden. (It is not.)

TURID ALIDA SOLBERG: We’re sharing a really special moment with you now, because we just got our vinyl! And I haven’t seen it ’til now, so you’re part of this!

ANNE T. DONAHUE: This is so exciting! I’m really psyched to be able to chat. I think, first and foremost, that I really need to know about the cat in your promo photos. Everything about it.

TURID: What do you want to know?

I need to know the cat’s name, if he’s yours…

Well, I’m hanging up! But fair enough. Let’s talk about your album! What does the title Talk/Brag mean to you?

TURID: It’s the title track. We wanted to name [the album] after one of the songs. And I also love pronouncing it. It was an easy choice if we were to pick one of those songs. [Turns to Andreas] You picked the title, though.

ANDREAS LØNMO KNUDSRØD: Yeah, it’s short, and it makes you wonder what it means—the title makes me curious.

TURID: Yeah, in the song I’m bragging about my potential and talking about it.

TURID: And around now, so we should be celebrating! We started because of music, I would say. We started a band and we started making songs, and we started with another guy first, and we went to the same school. That’s how we met.

Was it intentional to keep your public personas a bit of a mystery? You’re public in that you use social media, but you don’t really put yourselves out there.

TURID: I guess it’s intentional that way. It doesn’t feel natural for us to overshare.

Why is it easier to share who you are through music, as opposed to through social media?

ANDREAS: That’s a big question! You can write a PhD about this stuff. That’s one of the great values of music. It’s a way of speaking differently than we normally communicate, so you can shout out bad stuff and good stuff.

TURID: And it’s not like it’s insta-music. We can experience stuff and go through it again and again and reflect. It’s very difficult to compare, I think, in a way.

TURID: Maybe it’s a conversation I had with myself! Actually, the whole profile we have now, it started with some ideas I had, but it’s in collaboration with a photographer and a friend of mine who’s a designer. It’s inspired by these family portraits that you find on your grandmother’s wall, but I wanted [listeners] to wonder if it was a family portrait or a Bonnie and Clyde–type of style—or something in-between. Are we siblings? Or are we lovers? I wanted to [create that]. And of course the ’70s thing, I have a big love for the ’70s. In Norway, it’s a big part of the fashion world right now.

Your actual relationship status is a mystery. But can you tell us?

In terms of touring, you’ve been everywhere. How do you make sure you keep it together when you’re touring so often, and with just the two of you?

ANDREAS: We don’t know. There’s tension of course, but there’s always a purpose. Every day, there’s a reason—we’re doing something, we’re not just walking around and figuring out what to do. There’s always something going on.

What do you hope is going to happen next? Do you want to play huge venues and achieve world domination, or is it a question of focusing on your art and allowing whatever happens to happens?

TURID: I don’t think about world domination every day [Laughs], but of course we want to share it with as many people as possible.

ANDREAS: We don’t want to end up anywhere. We want to continue moving.

TURID: It’s so difficult to plan because you never ever, ever know. It’s much better to think about the music and what you want to achieve.

What do you do to recharge? Do you have other avenues of creativity?

TURID: I dance! I love dance. And [to Andreas] you go skiing.

So Norwegian! As teens, was music something you aspired to do?

ANDREAS: Yeah, I don’t think I had this very strong idea that I was going to be a musician when I was a teenager, but I can’t remember any other ideas I had—music was the thing I was really into. I was really into playing the drums, like rehearsing and trying to be a better musician. And then in my late teens and early twenties, my interests turned from drumming to music and now they’re both.

What’s most exciting thing about releasing this album?

TURID: It just gets so real when you have this.

ANDREAS: And after two years of making something that you can never grab, finally we can. So it’s almost like Talk/Grab, not Talk/Brag.

TURID: And it’s the sharing part.

TURID: And then it’s like, will they get what we’re trying to say?

So what are you trying to say?

TURID: I don’t think I can put it in one word. I write the lyrics and the melodies, and I’m trying to create these moments that you, as a listener, are in the know about what’s happening. I hope listeners can feel it, and feel that they’re experiencing the same, in a way. For me, the melodies and the rhythm of the melodies are as important as the words. Because that’s where the emotion lies, and the heartbeat of it.

ANDREAS: I’m happy we actually made it! It’s been a struggle from time to time. So maybe that’s what I’m most proud of: That it’s actually here now. Because I can remember a few moments over the last year or so where I was like, “Ugh—let’s just call it off and go skiing.” [Laughs]

TURID: We started off in the spring of 2013, so almost three years ago. And then we went to the studio in the summer and we recorded five of the songs and we were not happy at all, so we had to start over. I’m quite proud of it, actually. Especially because we restarted and didn’t just release something we weren’t happy with.

Adele did that! She wrote something and scrapped it and wrote 25. And Rihanna took her time with her album and Kanye with Waves and Drake—I think there’s something to be said for knowing yourself.

TURID: There’s always a big contrast there [between] us and the people working on music. We have experienced that the manager or the PR want us to make and make and put out and put out, so we always have to try and stay calm and just think of what’s best.

Is there a mantra you tell yourself, or something you say to stay true to yourself?