How to Talk About Your Beliefs

These conversations don’t have to hurt, or turn into raging arguments. 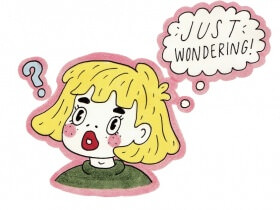 Just Wondering: Is It OK That My Girlfriend Keeps Us Secret? 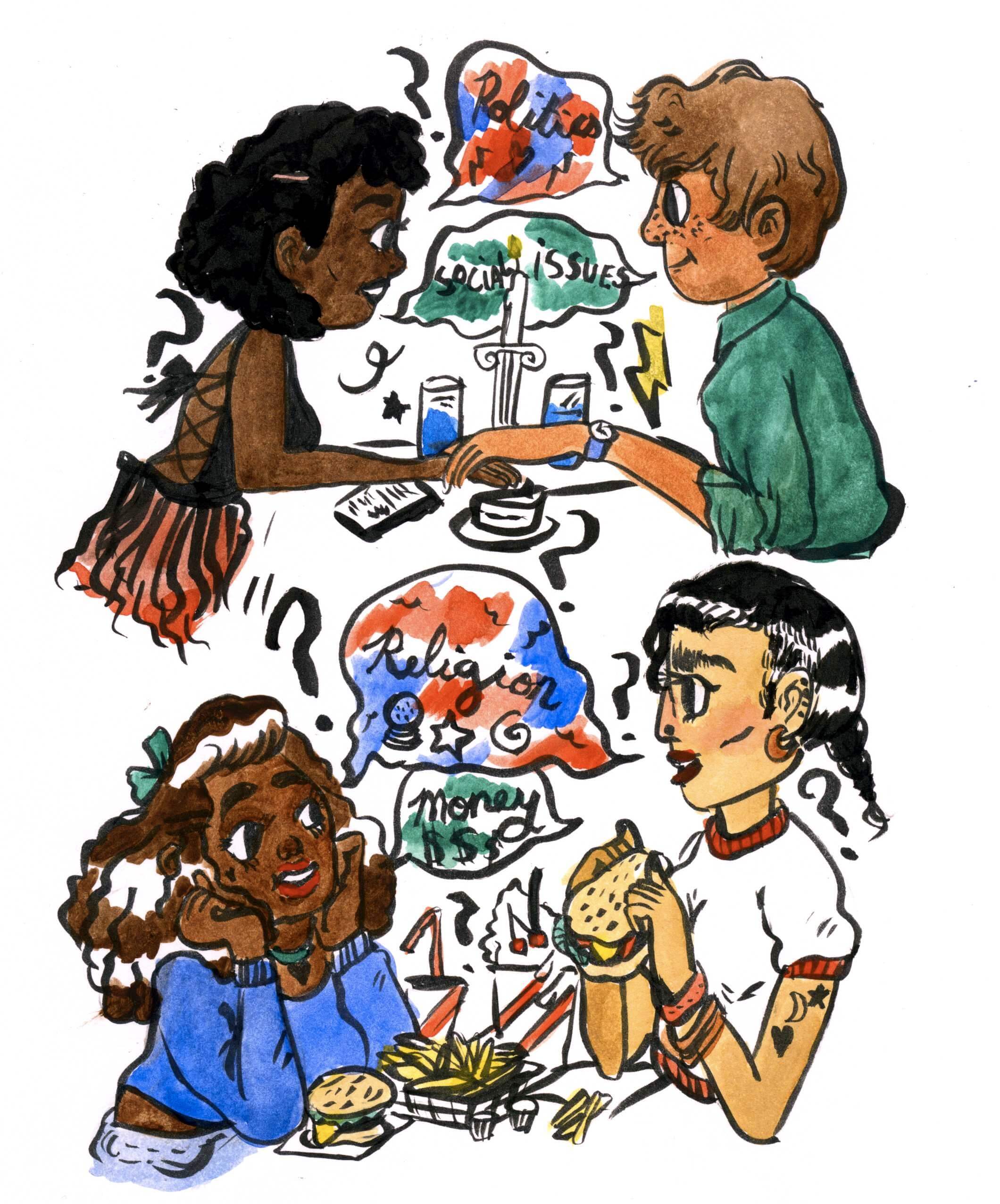 You know when you’re trying to fall asleep and for some reason all you can think of is how an awful conversation could have gone differently? The kind where you wish you’d had a response for someone at the right moment, or that you could have taken a comment back? For me, these conversations usually relate to my beliefs—either they’re being questioned or I’m having a hard time articulating them.

Sometimes it seems like the topics that affect our lives the most—important stuff like race, religion, money, and politics—are the things we should talk about least. Although I was never explicitly instructed never to talk about race or my politics, I felt discouraged by adults not to “rock the boat” when these subjects came up. I also worried that I’d have a hard time talking about these issues without getting into an argument. Experience has shown me that’s not at all true! In fact, it’s important to have these discussions with people in your circle, especially if you’re still figuring out where you stand on this really important and life-affecting stuff. In a lot of ways, talking out my opinions has been the best way to form them.

As a black girl who grew up around white people, I often struggled to talk about race, religion, and gender with my predominately white classmates. When I did talk about race, there was always someone who would tell me that racism “wasn’t a big issue anymore.” I knew that wasn’t true, of course; the only thing is, I didn’t think my experience was enough proof to argue that racism was still a huge issue. When I really started going online—beyond talking to my friends and playing video games—my eyes were opened. Much of what I couldn’t articulate about race and gender was explained in blog posts and articles that intelligently articulated what I’d felt and experienced.

And yet, despite my newfound knowledge I still cowered when conversations about race or gender came up in class—partly because I didn’t really know how to talk (in real life) about these “touchy” topics without feeling awkward. I was so worried I’d be asked a question I didn’t have the answer to, or that I would be singled out for having a different opinion.

It’s natural to feel uncomfortable when you’re discussing something that’s near and dear to your heart, but even if you don’t agree with someone, these encounters don’t need to be awkward or unpleasant. They can strengthen your relationships with people, even if you disagree. There are SO MANY WAYS to have what we’re told are “difficult” conversations. If you’re preparing to jump into a conversation about politics or religion with someone you might not see eye-to-eye with, here are a few things to keep in mind:

When you’re really passionate about something, it’s easy for the words to pour out. If your goal is to educate or to have an open discussion, then even if you believe someone is SUPER wrong and uninformed, try not to spend the time they’re talking formulating your counterargument. I realized I was doing this when, during conversations, friends and family would repeatedly tell me to “listen.” At first, I was insulted that they assumed I wasn’t listening, until I recognized, Oh wait, they can totally see that I’m zoning out and thinking of a response as they’re talking. If you find your mind whirring during a discussion, try to slow it down. And if you find you don’t have a reply at the ready when they’re done making their point, say something like, “OK, I hear what you’re saying. Give me a moment to digest that,” and take the time you need to form your reply. I still sometimes find myself wanting to spew every fact or statistic I know as quickly as possible, but in order to have a decent conversation you need hear the other person out.

Just because you believe something, doesn’t mean you have to know absolutely everything about it at the exact moment you’re discussing it. I used to feel that by not having all the answers I was failing to have a proper opinion, that I wasn’t representing my beliefs. I’m Muslim, so people ask me a lot of questions about my religion, and once someone asked me about the religious holiday Eid. I was pretty rusty on some of the details, and at the time, it felt so embarrassing at to have to say, “I’m not sure.” But if the experience taught me anything, it’s that it’s not a defeat to admit you don’t know something. Usually, it’s the first step in developing a better-informed opinion or increasing your background knowledge. I went home and googled, “Why isn’t there a set date for Eid all the time?” Answer: WE FOLLOW THE LUNAR CALENDAR. Nobody expects you to have a PhD in gender theory (or theology, in my case), and it would be unfair to expect the same of someone else. You’re never going to know everything, and that’s OK! Try to remember that you’re having a discussion—nobody is keeping score.

Sometimes, when you talk to someone you perceive as more intelligent than you it’s intimidating, and it’s easy to lose confidence in what you know. Don’t let that get to you, because (1) they don’t have all the answers, either and (2) you know your own life. If you’re talking about something that affects you daily, chances are you have your own, unique lived experience that nobody can validly deny or belittle. In class, talking about my experiences as a girl who is black and Muslim, it’d feel like my “anecdotal evidence” wasn’t enough. OF COURSE IT IS! I know my own life, I know what I’ve faced. You don’t need to pull out a statistic on racism or gender inequality to prove you’ve experienced racism or sexism, YOU KNOW YOU HAVE and that’s enough. Don’t be afraid to stick to your guns, even if you feel a little shaky or nervous. Again, it’s not a competition, so it doesn’t matter if someone knows a little more, or thinks a little differently than you do.

Try to keep the other person’s experience in mind.

When I first started really learning about social justice, it was a revelation. But the more I learned, the more I understood that not everyone has had the experiences or resources I have. Once, a white friend asked me if it was possible for a white person to experience racism. At the time, it was SO OBVIOUS the answer was no, that maybe in my response to them I came off as condescending, when really they were asking an honest question.

People will say very ignorant things, and you don’t need to accept hurtful or bigoted comments (more on that later). A trick I use when engaging in discussions like these, is remembering all the not-so-great stuff I believed before I began educating myself. In fact, for a while I did think maybe reverse racism was a thing (yes, I still cringe knowing I thought this). For some people, you might be their first point of knowledge on a topic you think is commonly understood, meaning it will probably be best to stick to the basics. On the other hand, you might be talking to someone with way more experience or knowledge than you have, which is great! Ask questions, this could be an opportunity to go beyond what you already know.

Know when to end a conversation/think about your own well-being.

At a former job, a colleague of mine would straight up tell me I was brainwashed for being religious. It hurt a lot, mostly because I knew I wasn’t and it sucked to know someone thought I was stupid. Our discussions would leave me drained until I realized, Wait, I don’t actually need to have these talks. After that, when the subject would come up, which was surprisingly often, I would disengage and tell them, “I don’t really think we’re ever going to agree on this, so there’s no point in talking about it.” And that was that.

People might say something that hurts you on a personal level, maybe without even knowing it. If a conversation stresses you out or make you feel bad, you don’t need to be a hero and continue engaging. Just because you feel you represent a certain identity or point of view, doesn’t mean you need to be anyone’s teacher. Some people simply won’t be worth your time or effort, and that’s NOT AT ALL a failure on your part. In the end, you’ll feel better for taking care of you.

Bottom line: Conversations like these don’t have to feel like pulling teeth. If you want to talk about something that you find important, you have every right to express yourself. It won’t always be easy, but it’s important to remember that everyone is figuring things out as they go. There’s no secret formula to having the perfect discussion, but with practice you’ll feel a lot more prepared when the time comes. ♦