Gameplay: “The More You Try, the Better You Get”

An interview with the video game designer Catt Small. 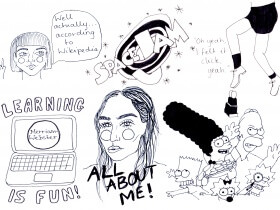 During the holidays, I had the most fortunate experience to interview Catt Small, a games designer, SoundCloud product designer, community builder, and regular jill-of-all-trades. Catt recently got a master’s degree from New York University Tandon School of Engineering’s Integrated Digital Media program. Her thesis was a mobile game called SenseU, which was designed to teach sex-ed without being super judgmental or boring.

Catt makes a wide array of video games. Some, like SweetXheart, pull from her personal experiences, like encountering street harassment and growing up in the Bronx. Others like Prism Shell, a game she wrote starring a black female pilot of a spaceship that attacks bug-like aliens, are influenced by pop culture and sci-fi. Her games, while diverse in topic, have one common theme: They are hella fun to play. I sat down with her to ask her about her work process, how she designs games, and which games designers inspire her.

(Full disclosure: Catt and I are both members of the Code Liberation Foundation, where we teach women how to code by making video games!)

CAROLINE SINDERS: Catt Small, who are you, and how would you define what you do?

CATT SMALL: I do so many different things. I never like to label myself too much, but I’d call myself a couple of things: First, a product designer; second, a game maker; and then an artist, because I really like drawing and doing other kinds of stuff. Those are my main three things. That’s my work. There’s a lot more to me—I’m kind of weirdo and everyone knows I’m weird and random. I like expressing myself in any way possible, and that comes out in lots of different forms. It can be a project I’m working on for a user experience reason or a game, or anything. It all depends upon what I feel like saying, or what people need.

How did you get into game design?

I have always been interested in games. As a child, my parents and I played various kinds of games. Dad and I played board games like chess and Scrabble. Mom and I played Sonic the Hedgehog. As I matured, my interest in making games grew. I tried to make a game as early as 12 years old, but only succeeded around the age of 20.

Who are your favorite game designers?

I don’t have many favorite things, but I’ve been a huge fan of Keita Takahashi’s work for a long time. Katamari Damacy is a wonderful, whimsical, musical series. His [latest game] looks just as bright and joyous. Some of the New York City game designers who inspire me are Jane Friedhoff, Shawn Alexander Allen, and Jenny Jiao Hsia.

What are your favorite games?

My favorite game of all time is Sonic the Hedgehog 3. The game has a special place in my heart, and it makes me feel nostalgic every time I play it. I also love Dance Dance Revolution and still play regularly. Most recently, I’ve loved playing Undertale and Persona 4 Golden.

How did you get involved with technology? Like, did you study it in high school or college?

I experimented with technology often as a child. It wasn’t something I seriously studied until I got into graduate school. I am completely self-taught. My first projects were interactive games, but as I got older, I started to make websites. I fell in love with the artistic aspect of programming: You type things, then the results show up on the screen. You can make almost anything! The older I got, the more I learned more about coding. If you count my experiments as a 10-year-old, I’ve been programming for 16 years.

Sure. The thing I’ve always been most interested in is figuring out [how] games can convey human experiences. I think games are good at that, because there isn’t another medium where you can step into someone else’s shoes and control their body. I’ve always thought that it’s really important to figure out how I can tell my own stories, but in a way that doesn’t feel too didactic. I want [players] to come to their own conclusions about whatever the topic may be, and I want it to feel natural and part of the game—it doesn’t have to be the [game’s] main focus. Even with SenseU, which is focused on sex education, there are other parts of people’s lives that come into play, like existing in college and maturing as a human being.

When SweetXheart focused on street harassment, it touched on the general experience of being a black female nerd, and on other things—like working in technology as a marginalized person. It also touched on the daily process of what it was like for me, personally, back when I lived really far away in the Bronx and had to commute to Manhattan every day. One of the goals was to show what it’s like to be a woman of color, and what that meant that in multiple ways. Not just that it kind of sucks sometimes, but also, like, “Here’s what it’s like—you can make your own judgments about it.” I wanted to make it so that people can see the whole experience—the good parts, the bad parts, and the mediocre parts.

That’s one of the things that I really liked about Prism Shell. Like, she’s a black woman, but instead of that being acknowledged, it was like, she’s just a character!

Yeah! Prism Shell, for me, was a way of thinking about diversity. It wasn’t diversity in terms of pointing it out, like, “Look at our diverse character!” It was saying, “What if we put a black female character as the main person in our game? How would that affect who played the game, and would we be able to get more people to play it because of who the face of the game was?”

From the start, I designed her to be some kind of futuristic-looking character. In the beginning, she was definitely black, but a little lighter skinned. There was this study that predicted what people would look like in the future, and the study came up with someone who looked looked semi-brown and had light eyes. That was initially the basis for the character. I always wanted her to be a character, but I wanted to play off what people said about what the future would be like. When we started doing the redesign, after the initial version we made for a game jam, I thought a lot more, and I didn’t want her to look ambiguous. I wanted her to look like a black woman. I wanted that to be more clear and upfront. Even though she has blue hair and she is quirky in the way that she looks. She’s black a woman, but she doesn’t have to have black hair. There are tons of black women who dye their hair, for example, or wear contacts, or do all kinds of things that are “alternative” and have been doing that for a long time. That was one of the things I wanted to highlight: This is part of her identity, it’s her existence, and we don’t have to call it out. We can just have her there and have her represent of the game.

Then people liked the game. The really great thing is that we saw a lot of women look at the character and get interested in playing it because there was a female character. At least, we felt like that was one of the reasons. That was one of the things we were hoping for. The game’s mechanics are very classic “arcade”—you’re shooting stuff, whatever. But I really wanted to make sure we were reaching a new audience, and made it clear that this game is for everyone.

I think it does a great job of doing that. Arcade games are now pretty nostalgic, and I think that arcade games, because they are nostalgic, are kind of universal. The controllers feel a little easier to hold. It’s two buttons and a joystick that doesn’t have much movement to it. I love that you mention it’s universal, and that mechanics feels universal as well.

Wherever it went, we wanted to make it accessible to people and easy to learn, but also challenging. We wanted to hit that point where people get into playing a game and learning it, but when it also challenges them, and makes them improve and keep trying. That was important for me from a gaming perspective. I learned from games that the more you try, the better you get at stuff. Interestingly enough, a lot of people are taught—especially women—that you are innately good or bad at something. With games, that’s not how it is. You don’t know what you are doing at the beginning, and at the end you can beat all the levels. That’s proof that a lot of things don’t come innately. Some people have an en edge, but you can work really hard and get better at stuff. ♦