You Can Make Anything Into Music: An Interview With Emily Sprague 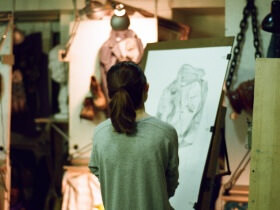 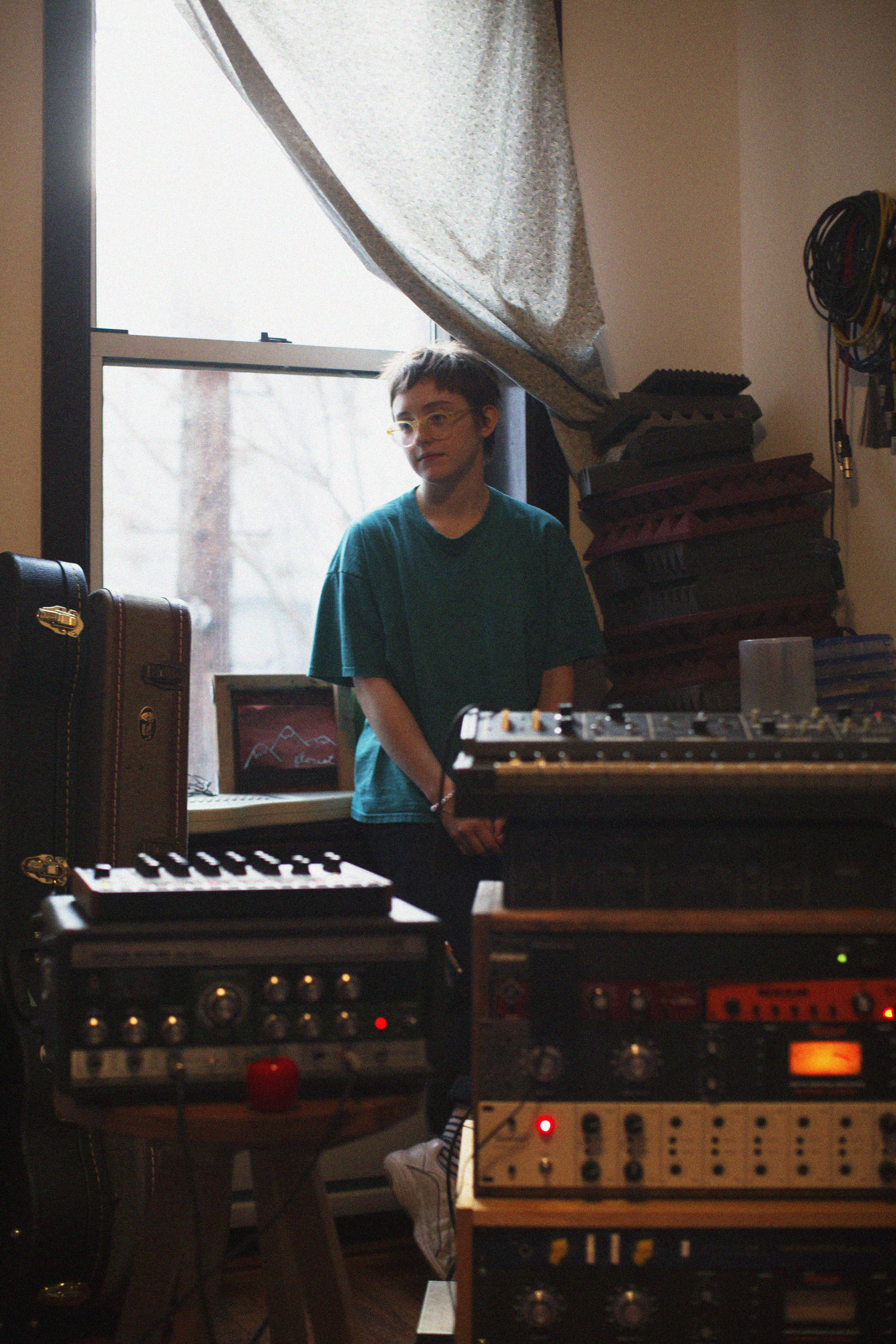 All photographs by Allyssa Yohana.

In December, I visited the music studio of Florist’s Emily Sprague, located in Emily’s apartment in the Sunset Park neighborhood of Brooklyn, New York. As we sat and talked, I noticed the room’s carefully chosen details: The fern in the corner, the unvarnished wooden tables that Emily constructed herself, on top of which sat her 80-pound tape machine and keyboards, and, above her desk, a poster from the Hudson Valley Spring Festival of 1992, which her dad gave her when she moved down to the city two years ago.

It’s here that Emily helped record and produce an upcoming Eskimeaux album, and with a lot of this gear that she, along with Florist band members Rick Spataro, Felix Walworth, and Jonnie Baker, recorded their forthcoming debut record The Birds Outside Sang, out January 29, on Double Double Whammy.

Other than Emily, I don’t personally know any women who record music for others. Wanting to acknowledge that she’s in a rare position, I initially asked her a few questions relating to gender, but as Laura Jane Grace said in an interview for She Shreds, most musicians just want to talk about the equipment they use. So, Emily told me about her first studio in a shed in her parents’ backyard, what it was like recording the upcoming Eskimeaux album, and shared some of her favorite gear.

KATIE BENNETT: What’s it like to be a “female producer”? I’m asking because it’s rare to see a woman in this position, but I also don’t want to sensationalize you and your work.

EMILY SPRAGUE: I feel the same way about it myself. As someone who plays and records music, I don’t want to label myself as a “woman” doing this because I don’t even really identify as either gender. But I also don’t want to not say that I’m a woman musician or producer, because I would want to be, if I ever could be, an inspiration to a young girl who thinks that just because women producers don’t exist [in] popular culture, she can’t do it herself. Producing music is so easy. So I totally get what you mean. I don’t want to make it totally about being a woman, because that seems to sort of take away from the point that it should just be normal. But it isn’t.

It’s so rare to hear of a woman producing music that it seems like some people think they don’t exist. Last January I read an interview Jessica Hopper did with Björk for The Pitchfork Review, and Björk talks about how often she isn’t credited for producing her own music. She says that it’s, in part, due to the fact that people haven’t seen pictures of her working in the studio, but mostly speaks to how production is still considered a boys’ club.

Totally. And it seems like the entire history of music is just men in the studio. I’ve never heard of a woman engineer or producer who was famous for working on a popular record. Every record that’s considered great seems to have a man’s name attached to it. It’s crazy. It doesn’t have to be that way.

Definitely, and right now it isn’t because we’re in your studio! You’re doin’ the thing. Does it ever feel weird to call it your studio? I sometimes feel weird calling my own space my “studio,” but I think that must come from insecurity, or feeling like I’m not a legit enough artist.

I think I felt weird calling it a studio at first, because my project spaces in the past have always been in the same room as my bedroom, or in a shed at my parents’ house or whatever, but I feel like this is a step in the right direction of having a standalone, multiple-room studio. I’m proud to call this a studio, though. I tried to make it a studio, and not just a living room that has some gear in it. We’ve recorded stuff in here that sounds, to my ears, like it could have been recorded in any studio.

There’s something affirming and defining about calling a place your studio, too. Like, you’re saying, “I am a musician. This isn’t just for fun, it’s my life.”

Yeah, it’s like, this is enough of my life to fill up a whole room in my house. [Laughs] And it is, and not just in the accumulation of stuff. I like to bring people in here to work on music, and it’s nice that it’s also in my house. We can make some food, play some video games, come back. [Laughs] 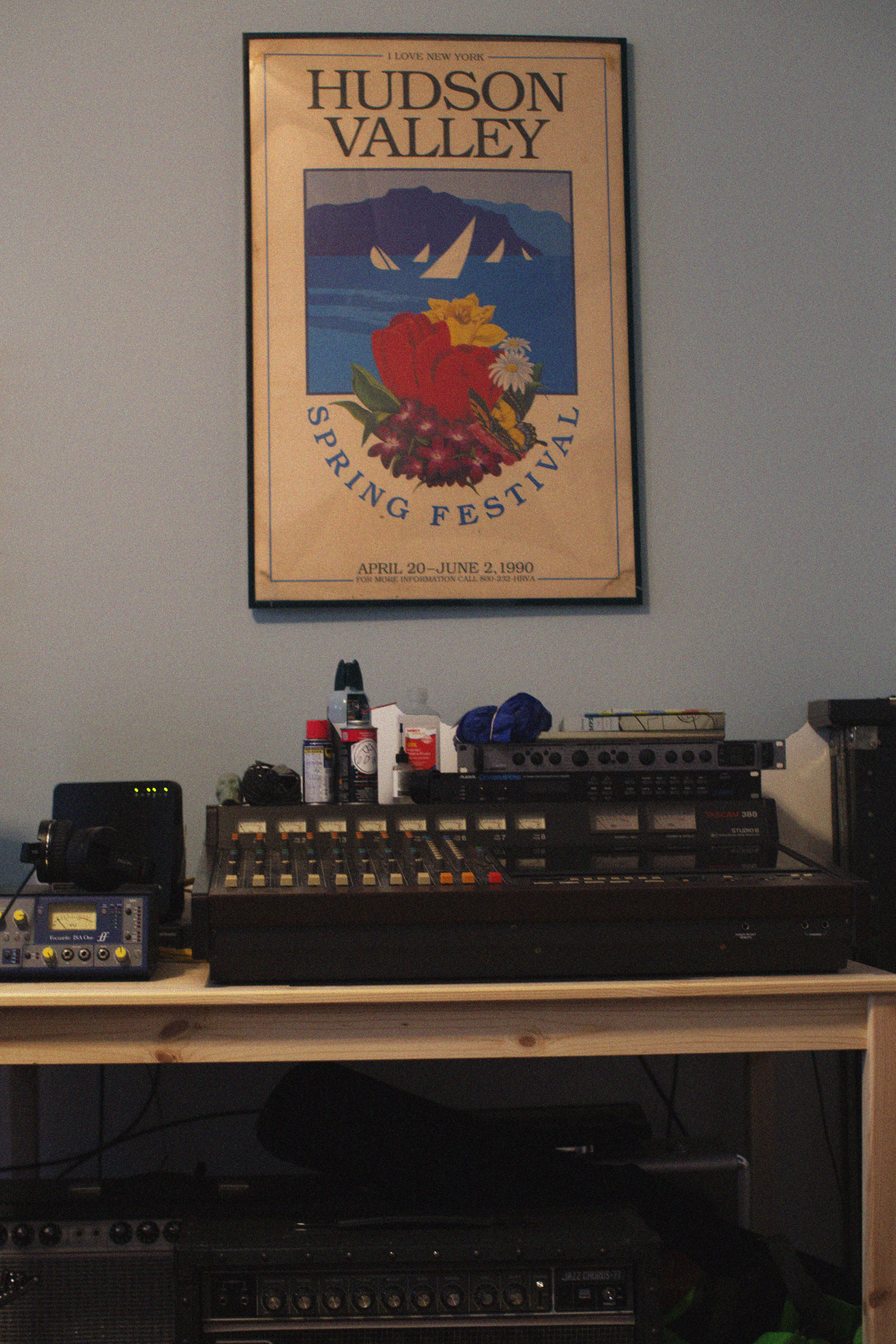 You mentioned having a shed in your parents’ house. What was your first studio space and how did you start out?

Well, I started in my bedroom at my parents’ house, on my laptop in my room. I began recording covers on GarageBand using the laptop microphone when I was 14, and eventually recorded a real song. I would just play around with the effects on GarageBand and try to make the tracks sound cool with reverb and stuff. I did that until I was about 16, and then I upgraded to a USB microphone. When I did, I remember being like, “Holy crap! this sounds sooo good. This sounds so much better.” I was just amazed at the quality, versus the built-in microphone. I was like, “I love this, I’m addicted to this, I’m obsessed with figuring out how to make things sound good.”

Then I got a two-channel USB interface and a condenser microphone, and moved the studio out of my bedroom and into part of my dad’s work shed in the back of the house, or sometimes a little cottage we have and mostly use for storage. I’d alternate between the two places, depending on how much stuff was in either. I’d set up on top of some bins and have my keyboard on top of some other bins on the other side of the room. But I’d hang stuff on the walls and try to make it seem like it was a cool studio. [Laughs] Paint some wood, put it up on the walls.

After I moved out of my parents’ house at 17, I’d just have my stuff in my room. I lived with people who also recorded music, and they had some stuff I’d use. And my set-up has grown since then. I got a four-track tape machine, and that was a pretty big deal for me for a while.

So you’ve just acquired all this stuff over the years?

Yeah, pretty much. And I always buy things used. As soon as I got the interface, I started to kick it into high gear, experimenting with recording, and I started to realize how easy it was to make good-sounding recordings. Before, I was always always making weird sounds and songs. I was just trying to be creative, and trying to just record my songs and put tambourine on them [Laughs] or do whatever, but once I started exploring microphones and the different ways to get audio from real-life to the computer or the tape, I was like, “Hmm…this is not gonna be that hard for me. As long as I can live at my parents’ house and have a job I can keep getting more stuff to record.” I got the tape machine, I got a bigger interface, and I started to go out and find stuff that just sounded cool, like some weird cheap microphones from Goodwill that didn’t even have XLR plugs on the end.