The singer-songwriter talks about his new album, and writing about real people. 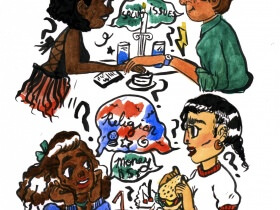 How to Talk About Your Beliefs 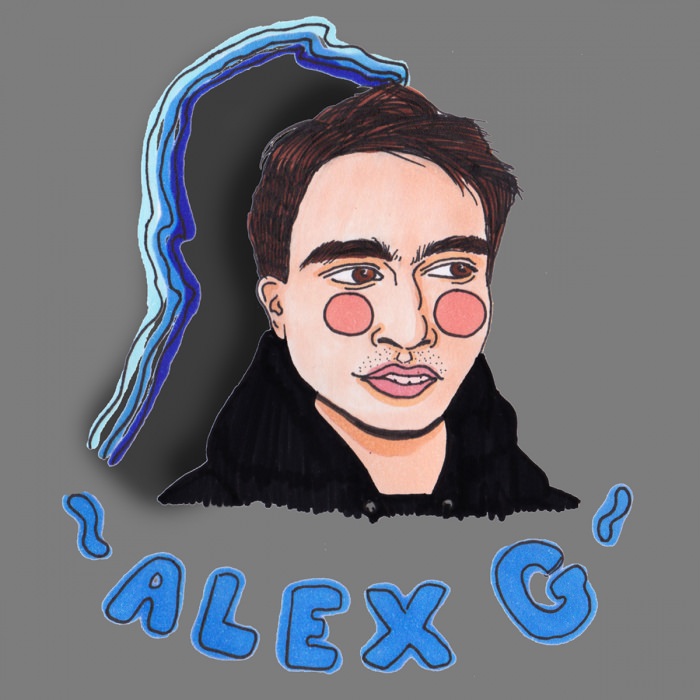 Beach Music, the latest album by Alex G, sounds to me like the sound of growing up, and not only because it has been the soundtrack to all the sweet disorientation of my first year at college. The tone of Beach Music is that, yeah, life can suck, but you eventually have to accept that and look out for the things that don’t suck. The 22-year-old singer-songwriter has been recording gorgeously melodic songs out of Philadelphia for several years, and his perspective is that of a sad but optimistic observer: teenage brothers taunt their siblings, dogs pee on other people’s lawns, people talk while chewing gum, and everything seems, no matter how weird, to be in place. Alex recently announced that he will begin touring with the band Porches in late January; I got to talk to him about his feelings about touring, the music he’s been listening to, and writing about real people.

LUCY BETZ: Hey, Alex! How has your week been?

Are you going to do a lot of that for your tour?

No, I think that is going to be pretty rare. Usually for a tour we get in a van and drive around.

You’ve probably gotten this before, but have you ever hung out with the other Alex G?

No! I’d love to, though. She seems cool. Never met her.

What kind of stuff have you been listening to this week? What’s been inspiring you?

I was just listening to this band called Bird Cloud. It’s like, kind of country music, but they have really interesting lyrics, so I think that stuff is cool. Other than that, I have not been listening to much music…oh, you know! I just remembered. There’s a new album by this guy, Brandon Can’t Dance. He’s got this new set of songs he posted on Bandcamp, I’ve been listening to that a lot. He’s pretty cool. But besides music, not much. I’m in a dry spell.

You use a lot of names in your songs. I’m just curious to know where they come from, and if they are based off of real people or made up characters.

I guess they are based off of real people, to an extent. The names aren’t real. I just use a name because it makes it more of a complete character, with a name, you know?

Have you ever written a song about a person and had that person recognize themselves?

Yeah, that happens sometimes, and it’s usually really shitty when it does. Usually that person…Obviously the songs are caricatures of people. So if someone gets a hint of something, it’s probably not fun for them.

I’ve had that happen with comics I’ve done…um, when the person finds out, it’s the most awkward thing is the world.

Yeah, right? You try and bring out all their interesting traits to the max, so it sort of makes them into a monster, in a way. But for the sake of the story, you’ve got to do it.

In some of your earlier music, you wrote a lot in the voices of different characters. Is there a reason for that?

I think it’s always a different person…whether or not I’m trying to be myself at a certain time, eventually it’s a different person. I guess back then, when I wrote songs like that, I wanted it to be clear that it was a character. Now it’s a little more interesting, to me, when the line between the character and the actual person is a little blurred, you know? I think that makes it a more interesting narrative.

Yeah! And on your most recent album, Beach Music, the writing is more introspective, and it seems more like your words instead of the voices of characters. Is there a reason why that shifted?

There was a decent amount to draw from in that period, so…I guess there was enough material to make it that way. It was worth it to me to write more from a weird version of my perspective, because there was enough to write about.

Even though some of your lyrics are sad, the tunes themselves have a kind of sing-songy sweetness to them. I’m wondering what the musical process of your songs is like.

That usually comes first. I guess music and lyrics are equally important, but I definitely spend way more time on the music, and I think that’s the most enjoyable part for me. A lot of the process…I usually just sit with a guitar for a long time and fiddle around, and eventually a couple chords will sound good, and I keep adding stuff to it until it becomes a whole song. Most of them come out that way. I just build something with the guitar and then layer on a bunch of other instruments and stuff to make it more interesting.

Do you have any favorite songs off your new album?

It’s hard to choose, but if I had to come up with one I’d probably say “Walk”, because it has no lyrics, and I like, I’m kind of proud of that guitar line.

So the music come more easily to you than the lyrics?

Yeah, definitely. I think the musical part comes more easily to me because that’s the fun part. The lyrics are sort of, more like work. Not that I don’t get satisfaction from making them, but music is this instinctual satisfaction. When I put a bunch of stuff together and it sounds good, I feel really good, whereas with lyrics, I don’t really get that gratification.

You like to tell stories in your songs. What draws you to that?

I just like stories a lot! I don’t know why. I like when you have a song and there’s a real, tangible character. Not too tangible—I don’t like ballads or anything like that, that stuff doesn’t interest me, but when you have a human element…I can’t explain why, but I just like it.

Do you have any interesting stories that have happened to you recently?

Well, being on the plane back from L.A., we stayed up all night. My friend Scotty, who plays drums in the band, he had a stomach virus, so he was throwing up the whole way home, he was in hell. That was pretty wild, especially for him.

You record a lot at home. What tricks have you picked up?

I’ve gotten pretty quick with mic placement. With the microphone that I have, at least. There’s a lot of different kinds of microphones, but the one that I have, I know pretty much exactly where to put it when recording drums or guitar to make them sound the best it can sound with this kind of mic. I double track everything, so I record the same thing twice for pretty much every track. That makes it sound fuller, I guess. The mic I have doesn’t pick things up very well—when I record things, it’s kind of a thin sound. So when I double it, it makes it sound like a better quality microphone, because I can pan it to different ears. Oh, and EQing stuff—I know how to EQ the drums to make them sound more like a studio quality drum set, by turning the low end up and stuff like that.

Do you have any tips for young people who want to make music but are intimidated by the production process?

If they are intimidated, the only tip I have is to not think about it like that. The only reason I started doing this was because it was a fun thing for me. That’s what made me keep doing it. It’s not like I’m even that good at it now, but I can make something that’s passable. The only thing I can say is to make a shitload of music because it’s fun, because you like to do it. Otherwise you aren’t going to have a good time, and you aren’t going to make anything good, because you don’t like it. ♦