The premiere of her new video, plus an interview about moving away from home. 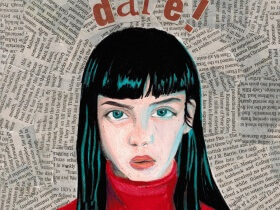 My Middle Name Is Dare

2015 was big for Flo Morrissey. After premiering the video for her first single, “Pages of Gold,” on Rookie in December 2014, the native Londoner toured the world. The 20-year-old also released her full-length album, Tomorrow Will Be Beautiful, and relocated to Paris, where she’s learning French and relishing her newfound independence.

I was excited to talk with Flo, not just about the video for “Show Me”—a stripped-down, albeit powerful counterpart to the song itself—but also about moving away from home, learning about yourself in new places, and navigating life stages while working to stay mindful and calm.

ANNE T. DONAHUE: OK, so let’s get down to business. The video for “Show Me” is so cool. I love that it highlights what’s natural and real—the mountains, as well as your voice. Did you come up with the concept yourself?

FLO MORRISSEY: Maximilla [Lukacs, the director] and I met when I recorded my album in April 2014. Around the same time a year later, when I was touring with Ibeyi, we met and discussed [the video] and already shared the “feeling.” Then she told me about this hidden labyrinth in the hills and it sounded perfect. We wanted to keep it simple, as you say, highlighting the power in nature and just singing the song and letting it unfold around this space.

Why did you decide to shoot in the Malibu Hills?

I think California has this out-of-time feeling to it, which is what I look for in most things unintentionally. I try to be happy with this time, too! But it’s hard because, as humans, we’re forever looking for something to take us away from reality. This place felt like that a bit for me, and it really just happened as Maximilla had this vision in the hills.

What’s your relationship like with the UK and home?

I love the UK, but actually moved to Paris three months ago. I was born in and grew up in London. I got tired and a bit uninspired by it there, even though it has so much to offer and is really beautiful! I appreciate it more now every time I come home. And most important, I have great family and friends to come back to.

What was it about Paris that drew you to it? Was it a difficult decision to pick up and move?

I am a bit of a hopeless romantic. I was drawn to the fact that the French seem to appreciate the world and live life and love to be inspired—taking their time, having lots of red wine and talks about life all night long, without being pretentious! I am more eager to go to exhibitions and see art all around, where I am. I feel being in Paris has broken this spell I had of almost limiting myself in London, and the opportunities I could create and people I could meet, as you get tired of things you know. I grew out of that version of myself and knew I had to move away to Paris to find that. Also, I would love to sing in French and be fluent soon. The language has always had me weak at the knees—I went to French nursery school, so have always had an affinity for it.

You come from a big family, too. What’s been the biggest adjustment for you in terms of being away from them while touring?

It can get quite lonely on the road, especially when I’m not with my band and it’s just me and my tour manager, [though] she is wonderful and it’s nice to have someone there who cares about you. But it definitely is a lot less talking than when I’m at home, and I don’t have any routine or people telling me off. [Laughs] I have to adjust to my surroundings a lot more and keep my eyes open. They both come with positives and negatives. I am so thankful that I get to put myself out there and challenge different sides of myself in this way.

I found for a long time that, being in the arts, my family didn’t really understand what I did because it wasn’t a 9-to-5 job or conventional. Did it take a while for your parents to understand your career?

I’m very lucky that my parents are very supportive and loving of what I do. It is hard to explain to them and my siblings the real ins and outs of what I go through day to day, but then I know that they have their own ways of having to live in the world, too. We all have our stuff, and if we can at least show empathy and compassion for one another, that should be enough.

Have you found a part of the world where you feel like yourself? I went to New York for the first time this year and, cliché as it is, felt like I was totally my best self there.

Yay! I’m happy for you. Nowhere has been like, “AH HA! THIS IS IT!” for me yet. But Paris and France get pretty close. I hope to go to India this year, or somewhere in the jungle! And BRAZIL! I toured Japan for five days playing shows in October, and it was much too brief, but I felt a real affinity with the tradition there and the simplicity, which I found more outside Tokyo. I hope to go back again soon.

How do you make new cities feel like home?

I have lots of little trinkets with me. I make myself laugh [about it], but I have crystals for certain days and sage to cleanse the space. I’m basically Topanga from Boy Meets World!

How do you re-adjust to being home after being away? Or is it an adjustment at all?

It definitely is an adjustment. It’s a funny “job”—playing a show every day to people you don’t know but who you create a huge bond with just for that evening. Then you get off the stage and go to the next place. I find that when I come back home, it’s hard to explain to my family or friends the emotions and feelings over the past couple weeks, so I almost need to be in solitude or go on a fun trip somewhere to not get too attached and in my head. It’s partly why I moved away. Being an adult in the real world with my music and then coming home and reverting to being a child…it felt necessary in order for me to grow to go and live on my own. Even though I love my family and would happily be with them all the time, it’s been a great experience making my own rules and transitioning into adulthood for real.

How do you avoid slipping into perpetual loneliness? Sometimes I feel like having too much time alone or to think leads to me thinking way too much and getting sad or anxious.

When I catch myself getting into that “space,” I usually enjoy going to yoga or out for a walk or sometimes just being with that loneliness and asking it questions: What is the root of it, what does it want me to do about the feeling? It sounds esoteric, but it really is just connecting with yourself on a deeper level. We get conditioned and made to believe, as humans, that to fix things, you can just take medicine or go to the drugstore when there is an “issue,” when really, you know the answer and probably would fix it better. It’s just having that trust!

I also try to meditate. I found Kundalini yoga last year, and kind of went a bit over the top with it and became too dependent. I stopped and took a break, which showed me everything needs balance, even “spirituality.” Now I like to do Hatha [yoga]. We can take things from so many practices and find what works for us as individuals to be mindful and our real selves. I am finding a more natural in-between by trying to meet each day fresh, and by implementing a practice in that sense.

Speaking of which, I especially love the line in “Show Me” where you say, “I’m no longer afraid of my past.” I think it’s something we’ve all had to deal with and overcome in order to grow up. What was your turning point?

Thank you! I don’t know if I’ve had my “turning point” per se. When I least expect that growth is when it happens!

How do you reconcile who you were with who you are now?

My core will always be the same. The point is not to be afraid of who I once was—none of us are or were all that bad, if you really put it into perspective. The past made me who I am today, and what’s already been made for me to walk is here always. It’s just learning to connect the dots, and realizing we don’t need to think so much. ♦