Some of the poet Jenny Zhang’s favorite places on the internet. 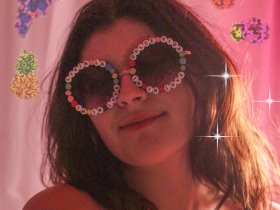 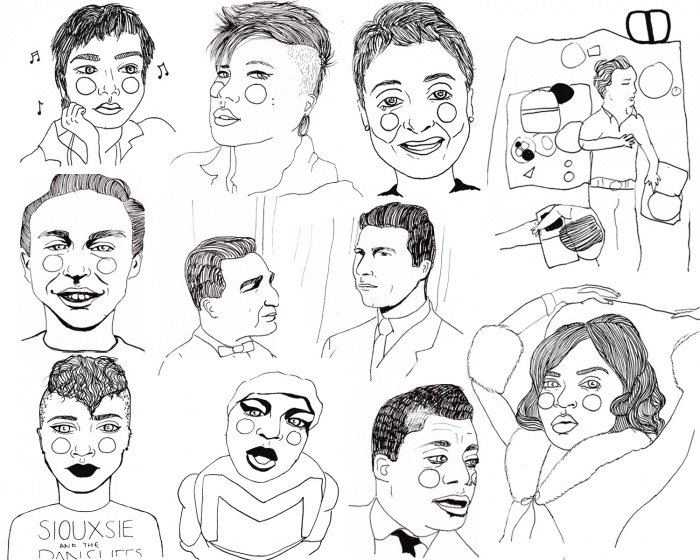 Jenny Zhang is a regular Rookie contributor and a poet–genius. Her writing, collected in Dear Jenny, We Are All Find (2012) and The Selected Jenny Zhang (2015), often makes us tear up in the impossible-to-tamp-down way you do when someone is suddenly speaking directly to your personhood. It also makes us laugh so hard we toot. Here, she shares some of her favorite places to visit on the internet.

1. Faye Wong’s covers of “Dreams” by the Cranberries and “Bluebeard” by Cocteau Twins, from the Chungking Express soundtrack

You know when that song comes on, the one you think is yours and yours alone, and suddenly you’re a twirling dervish in your own room singing along at the top of your lungs and the movie is your movie, the story is your life, the protagonist has always been you, the heroine, fallen, risen, or all that’s in-between is you again and mid-twirl, mid-howl, you are as happy and as lonely as any human being has ever been? I found that song while watching Wong Kar-Wai’s 1994 movie Chungking Express. The first words I ever heard on American soil were in Cantonese—it was a representative from some airline company on the phone in a red power suit with mega shoulder pads (this was the ’80s) saying into the phone “hong gong sai” and for years after it I repeated it like a song without ever learning what it meant. At home I spoke Mandarin. At school and elsewhere I spoke English. The Cantonese language has six or even up to nine tones (depending on which linguist you believe!) as opposed to the measly four in Mandarin, but when Faye Wong sings the Cranberries’ “Dreams” in Cantonese, I feel exposed to the bounty and numina of innumerable tones—the linguistic, the emotional, the spiritual, the psychic, and the ineffable:

It meant something to me back then (and it still means something now) to have encountered a young woman who was cool and gawky and moody and obsessive and lovesick and powerful and wasn’t a white girl. It changed how wild and how pleasantly delusional I felt when twirling, when trying to place myself into the unmade movie of my life. It meant something to me to hear her speak and it meant even more to hear her sing. It meant I should and could be a dreamer, too. It meant the heavily policed borders of beauty that I had previously assumed were fixed were now shifting. It meant I knew a world where girls like me were stars.

When I first discovered the Cocteau Twins, I spent so much time trying to decode what Elizabeth Fraser was actually singing. “Are you the right man for me/ are you safe for my friends/ for a mess is in my knees/ or am I as toxic for me?” I mumble-sang through “Bluebeard” before I ever read the gruesome fairytale on which it’s based (giving a whole new meaning to the “one who got away”). Listening to Faye Wong cover Liz Fraser’s glossolalia, in a language that was both exotic to me and often assumed by others to be my language, felt like a wonderful joke, a sweet fuck you to all the people who ever tried to hurt me with their ching chong changs—again the boundaries were crumbling:

The world of people laughing at how certain languages sound had no place in these songs. This was the world I knew I belonged to—the world of wonder, the world where indecipherable words are a pleasure not a joke. Come on all you dreamers, put these songs on and twirl with me. 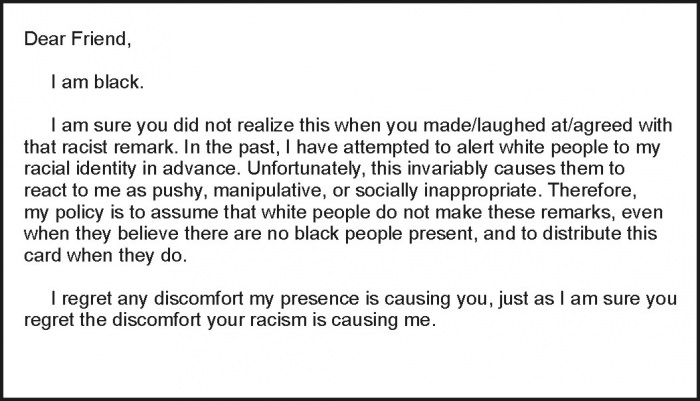 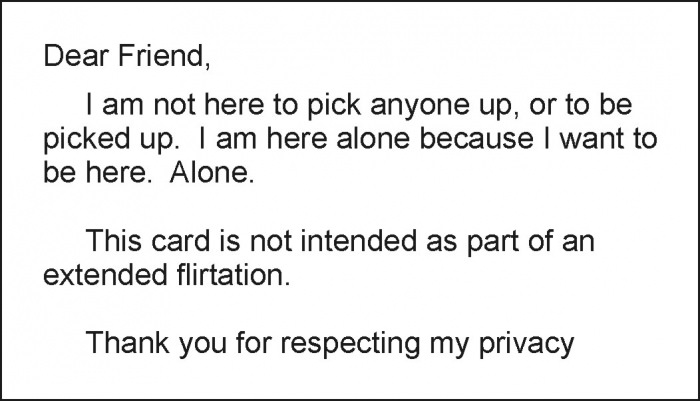 …and was instantly enthralled by her co-opting the very passive-aggressive tone that people who make public spaces unsafe for women and people of color often use to excuse themselves from the harm that they’ve caused. I printed out the cards and kept them close to me at all times, fantasizing about handing them out, just as Adrian used to, in situations that called for these very cards. Her website is a treasure trove of art and philosophy and ideology, dripping with intelligence and nerve and that same wonderful mocking tone which swings from sarcasm to sincerity. Especially wonderful are her letters to the editors of various magazines and newspapers that attacked and criticized her, tone deaf and blind to their own racist expectations and standards. In her 2003 letter “Dear Editor,” she goes on a long, ecstatic but mathematically precise exhortation to stop modifying her identity as an artist and philosopher with various permutations of “black,” “female” “African American” “woman” and “happens to be,” as she lists what she does not want to be called: “Please don’t call me a black artist,” “Please don’t call me a female philosopher,” “Please don’t call me an artist and philosopher who happens to be black and a woman,” and concluding with the mic drop to obliterate all mic drops:

Sometimes worlds collide and when they do it creates a kind of magic that makes the old magic seem like a cheap party trick. What am I talking about? I’m talking LIL’ KIM x BELL HOOKS, baby. In an interview for Paper back in 1997, these two women get into it, from the dazzling intro where bell hooks asserts, “Long before Lil’ Kim could speak, smart sluts of all ages were talking trash. To talk trash and get paid has always been harder for women than for men,” to really tender yet totally direct questions like, “When did you start thinking of yourself as a sexual being who had a right to her sexual desire?”

To read a profile of a powerful, sexual, beautiful young woman pop star and not encounter one single instance of objectification, sexualization, or gaze-y idealization—who wudda thunk all it took was two women creating a safe space to see each other?

Everyone loves a place that seems stuck in an earlier, weirder time. Everyone loves to laugh at people who don’t realize they’re hilarious. Everyone loves a girl in a cold-shoulder denim top matter-of-factly revealing that she fights and once sent a girl to the hospital. I was as hyped as anyone about the trailer to Ruth Leitman and Carol Weaks Cassidy’s documentary about the people who hang out on the boardwalk of Wildwood, New Jersey, featuring a series of clips of mostly young women being glib and crass and powerful and tender (“You always got the check-to-cash,” one of them says, pointing both hands down at her vagina). But even so, I couldn’t really get down with the blinding whiteness of the documentary, which starts to take on familiar shades of nostalgia for a whiter past—a time when microcommunities of working class white people acted in a ways that could be coded as trashy (but never truly dangerous or violent) and those actions were a kind of entertainment for us, the viewer.

When I want to wash that taste out of my mouth, I turn to Junot Díaz’s short story “Wildwood,” (which is also a chapter from his brilliant novel The Brief Wondrous Life of Oscar Wao), published in the New Yorker in 2007. It begins with Lola, a beautiful, rebellious, teenage punk-rock Dominicana being called into the bathroom by her mother—who is equal parts abusive, tough, vulnerable, and traumatized—to feel the cancerous lump in her breast. It’s a story for all the brown girls who wanted to fly their freak flags high but thought the freak nation was for pale, skinny white girls. It’s a story for anyone who ever has had a troubled relationship with their family, especially their mother. It’s a story for all the girls who thought the love of a boy would save us, only to see that’s just the beginning of a new thing we need to be saved from. It’s a story for anyone whose family bears the scars and the inherited traumas passed down from generations of brutal civil war (especially as caused and stirred by U.S. military interventions), colonialism, imperialism, white supremacy, and patriarchy, and struggle to find love and tenderness through that thicket of blood memory and lived traumas.

Sometimes I think pop culture is only really ever very interesting when someone who was never supposed to have mass appeal sneaks their way into it. Now of course, it’s getting harder and harder to be a territorial weirdo who enjoys things no one else has heard of, though it doesn’t make the weird stuff any less pleasurable when it’s briefly a part of the mainstream cultural conversation (see every time Björk does anything). This clip of the experimental composer John Cage performing “Water Walk” on the popular 1960s show I’ve Got a Secret has all the key elements of the pleasures of watching weirdos have their moment in pop culture. After reading a few reviews mocking John Cage’s music and revealing to the audience that the instruments Mr. Cage plans on using for his performance include: a water pitcher, an iron pipe, a bottle of wine, an electric mixer, two cymbals, a rubber duck, a vase of roses, five radios, a bathtub, ice cubes, and a grand piano, the host of show, who reminds me of someone’s skeptical, patronizing uncle, says to John Cage, that some members of the audience may just laugh at his performance, to which Cage responds, with perfect, deadpan sincerity, “I consider laughter preferable to tears.” And just like that, the audience laughs and laughs and laughs.