The Art of Rewriting

Don’t let your stories wither away. 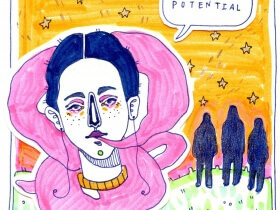 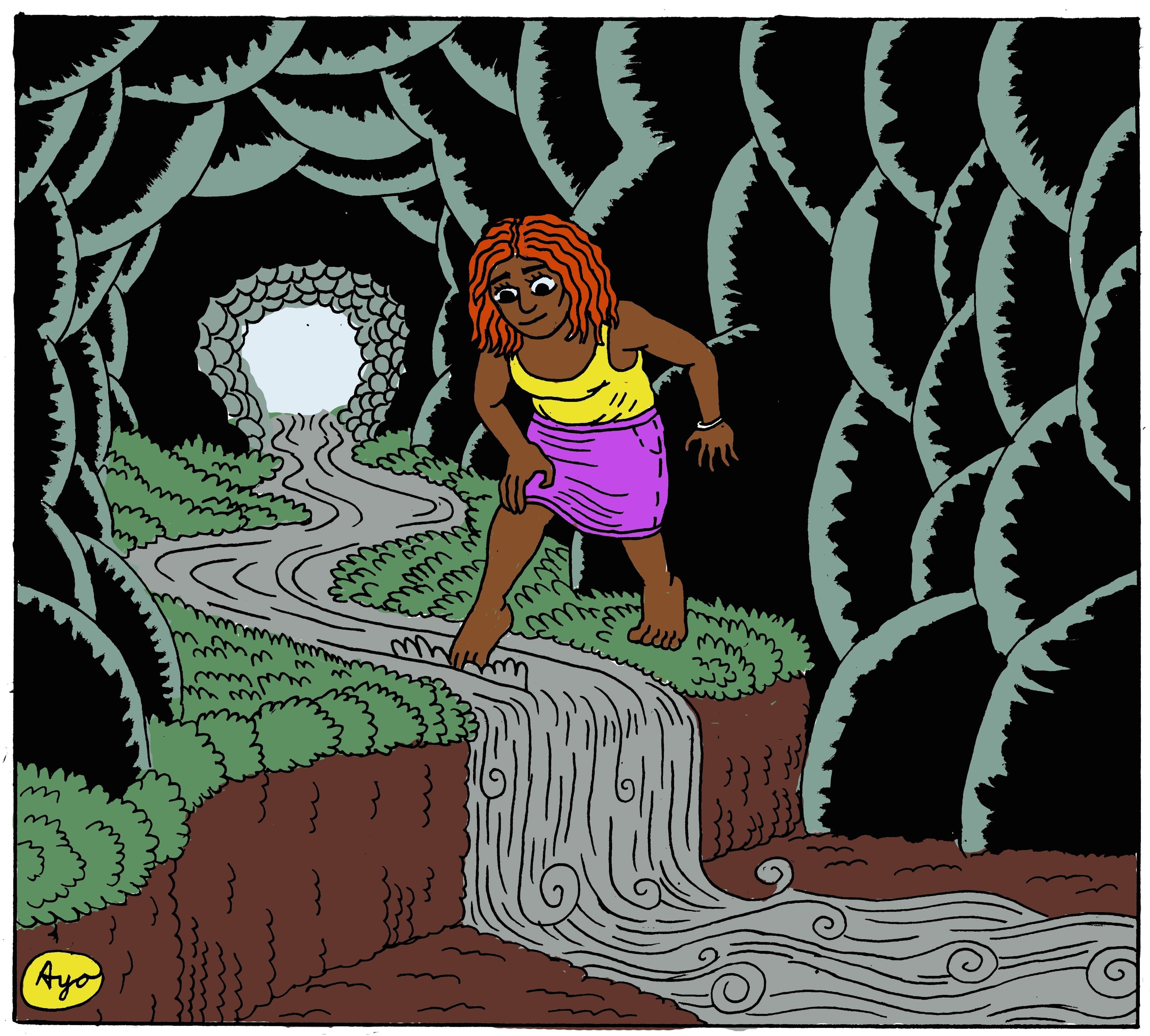 For a long time, the process of editing a story mystified me.

I understood well enough that when you wrote a first draft, you followed a thread into a dark forest and found out where you’d end up. You just did the first thing you thought of. But what about when you needed to take those threads and wrap them up? I got scared when I thought of facing what I’d made, with all its inherent flaws, and then refining it. I either refused to start editing, letting the story wither, or I edited obsessively, and never let the story go.

In the 1995 Studio Ghibli movie Whisper of the Heart, the young protagonist, Shizuku, writes a story to impress Seiji, the boy she likes—and to prove to herself that she can do it. 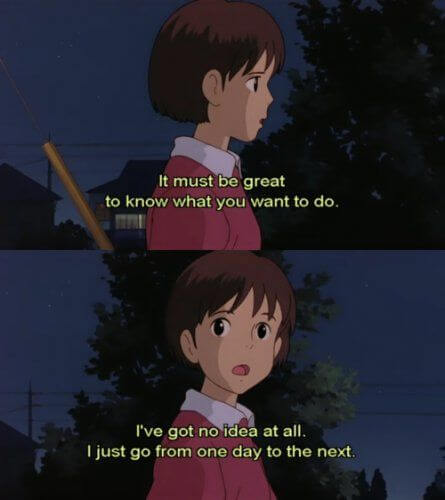 She shirks her chores, skimps on her homework, and stays up late, writing for her life. At the end of all that work, she presents it to Seiji’s grandfather, her friend Shiro Nishi, an old antiques shopkeeper whose German cat statue inspired Shizuku’s story. After reading it, Shiro Nishi thanks her and says it’s great. She breaks down, saying it’s no good, “I couldn’t write what I wanted!”

Shiro Nishi says, “You’ve shown me the rough stone you’ve just cut from the rock. You’ve worked hard. You’re wonderful.” Shizuku’s lip trembles as the bright lights of the city at night glow behind her. “There’s no need to rush now,” he says. “Take your time and polish it.”

I understand everything through stories, even the process of storytelling. In his book The Hero With a Thousand Faces, the mythologist Joseph Campbell theorizes “the hero’s journey.” He congeals the common themes in stories from Buddhism, Christianity, and Ancient Greece into what he calls “the monomyth.” He borrowed the term “archetypes” from his teacher, the psychotherapist Carl Jung, to describe character types who appeared over and over in different forms in stories. The Wise Old Man archetype appears to the Hero to help them on their journey, just like Shiro Nishi acts as a guide to Shizuku, or Obi-Wan Kenobi to Luke Skywalker. George Lucas studied Campbell when he wrote Star Wars, which is why those movies feel like old fairy tales—they are.

So, let’s follow a hero along her path of initial spark, and editing. Let’s say she’s a writer named Bat.

First, the hero hears a call to action. Bat’s inner voice says, “Make this thing!!” and her inner voice sounds like a yelling Ian MacKaye from Fugazi, because she’s been listening to them a lot lately, which is to say, it sounds urgent. Inspiration acts as her inner Veruca Salt—inspiration always wants it now. Maybe inspiration knows that if Bat doesn’t at least write down some notes ASAP, yes even now while she’s on the 42 bus home from the comic book shop near Penn’s Landing and she’s so tired she doesn’t even want to lift her arms, she probably won’t remember her idea later, no matter how great it was.

Bat resists, not just the notion of writing some notes right now, but the whole enterprise. She tries to talk herself out of it. Many real-life factors may impede her—job, family, time, school—and she may feel scared of the unknown.

But maybe she’s talked herself out of following exciting ideas before, and by now she knows that her options are limited. She can ignore it, and stay where she is, but endure a little soul death. Her other choice is to enter a dark cave with only a little lantern to light her way.

When Bat finishes her first draft, she thinks she’s basically done. She wants to believe that she just needs to check for spelling errors, send it to McSweeney’s, and before she knows it, she’ll be sipping fancy lattes and playing racquetball with Zadie Smith. (“Oh Zadie, you’re such a card! When will we see your good friend Chris Ware on the court?”) But, as Robert McKee says in Story, his book on screenwriting, stories hinge on moments when characters meet a gap between what they expect, and what really happens. The big reversals come up at the end of act breaks. And at the end of Act One of our story, Bat finds that while she’s laid important groundwork and created an impressive foundation, her house will fall down if you look at it too hard.

Bat enters Act Two, and she takes some time to rest or invest energy in other projects, so that she can come back to it fresh in a month or two.

In Thirteen Ways of Looking at the Novel, Jane Smiley writes, “You have made your commitment; now make the most of it. You will also try to decide whether it is good. Let me answer that for you—it is, but it can be better, and your job in rewriting is to make it better.”

When Bat cracks open the notebook, she hears nasty things being whispered in her ear. This part of herself yells at her to stop, puts her down, calls her dumb. It’s her lizard brain talking, the amygdala, the scarcity-driven mind, which, in its view, wants to save Bat from the embarrassment of potential failure. But Bat knows this lizard brain’s tricks, so she talks to it in soothing tones, explaining logically why she should continue and why it’s fine, until that part of the brain is lulled to sleep. Then, she can begin. She comes to the manuscript as if her best friend wrote it. Bat looks at it with an eye that is never coddling, but always kind, and cuttingly honest.

Annie Dillard says in The Writing Life that when you look over a draft, “The part you must jettison is not only the best-written part, it is also, oddly, the part which was to have been the very point.” And, “You can waste a year worrying about it or you can get it over with now. (Are you a woman, or a mouse?)”

Bat draws comfort from hearing other artists talk about their process, the murky paths they walk. She hears the director Robert Rodriguez talk on The Nerdist podcast, and all of a sudden she’s a Coke bottle that’s been shook up and is about to be opened.

Bat writes her second draft. She takes solace in interviews with her favorite writers, who all reflect on how fucking hard it is to write a story. McKee writes in Story, “Generally, a feature-length Archplot [a story with a traditionally ‘big’ plot, as opposed to the Miniplots or Anti-plots of some independent films] is designed around 40 to 60 scenes that conspire into 12 to 18 sequences that build into three or more acts that top each other continuously to the end of the line. To create 40 to 60 scenes and not repeat yourself, you need to invent hundreds.”

By the end of her second draft, Bat has exhausted what she can do on her own. So she draws on the resources of friends, mentors, and teachers. She asks the people she trusts: What did you want to hear more about? Which parts bored you, and where exactly did your interest wane? Did you feel it was earned when Julie kissed Jane—was there enough buildup and tension?

Bat listens to what her inner circle says, and in particular she listens for what TV writers call “the note behind the note.” When executives give TV writers notes on scripts, the writers look for larger storytelling concerns suggested by the often very specific feedback given.

Bat gives her story, “It Was a Dark and Stormy Night,” to her friend Bea to look over. (Bat’s protagonist, Julie, is a big Snoopy fan.) 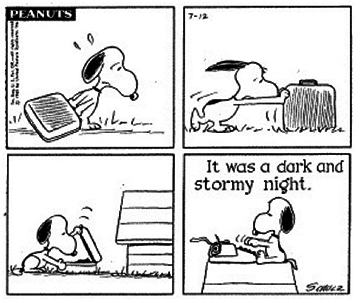 Bea comes back at lunchtime and in between bites of bad cafeteria pizza, she tells Bat that she thinks Julie should end up with Jill, not Jane. Julie and Jane seem mismatched, Bea says—they’re always on each other about something or other.

Bat may ignore Bea’s note completely—she can if she wants. She can decide that Bea’s totally right, and change the story to switch the pairings. Or, maybe Bat believes that the note beneath the note is that while she wrote Julie and Jane to be complementary with some interesting tensions, the attraction between them gets lost.

So, Bat moves a scene around, trims a little bit of the clashing, because it had been established and become redundant. Fluff. A cute moment surfaces between the two: It had always been there, but the light hit it in a new way as Bat cleared out the clutter around it.

The rivers fork in front of Bat, and sometimes she finds herself at a loss for where to go. But even when she gets lost, that information helps her to know where not to go next, which is important. Those little, mundane bits of information add up. Some paths lead to underground caves with glittering walls.

She reaches the river that spills out to the sea. “The feeling you are looking for as you decide whether you are finished,” Jane Smiley says, “is exhaustion. I do not mean literal physical fatigue as much as the sense that you have used up your inventiveness, your intelligence, and your ideas in regard to this story and these characters. While you are still interested in them, you have thought every thought you are capable of about them. Chances are your novel is not perfect…but you have come to the end of your relationship with it.”

Bat stands at the water’s edge, on the other end of a tunnel she didn’t know was there, looking out at a view of the sea that she’d never dreamed of. At the water’s edge, she hopes to find money and applause greeting her, and neither are sure. But she can be sure, at least, that the journey took her somewhere, and she will be changed. ♦