Scenes from a friendship loved and lost. 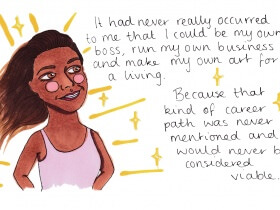 This Works for Me 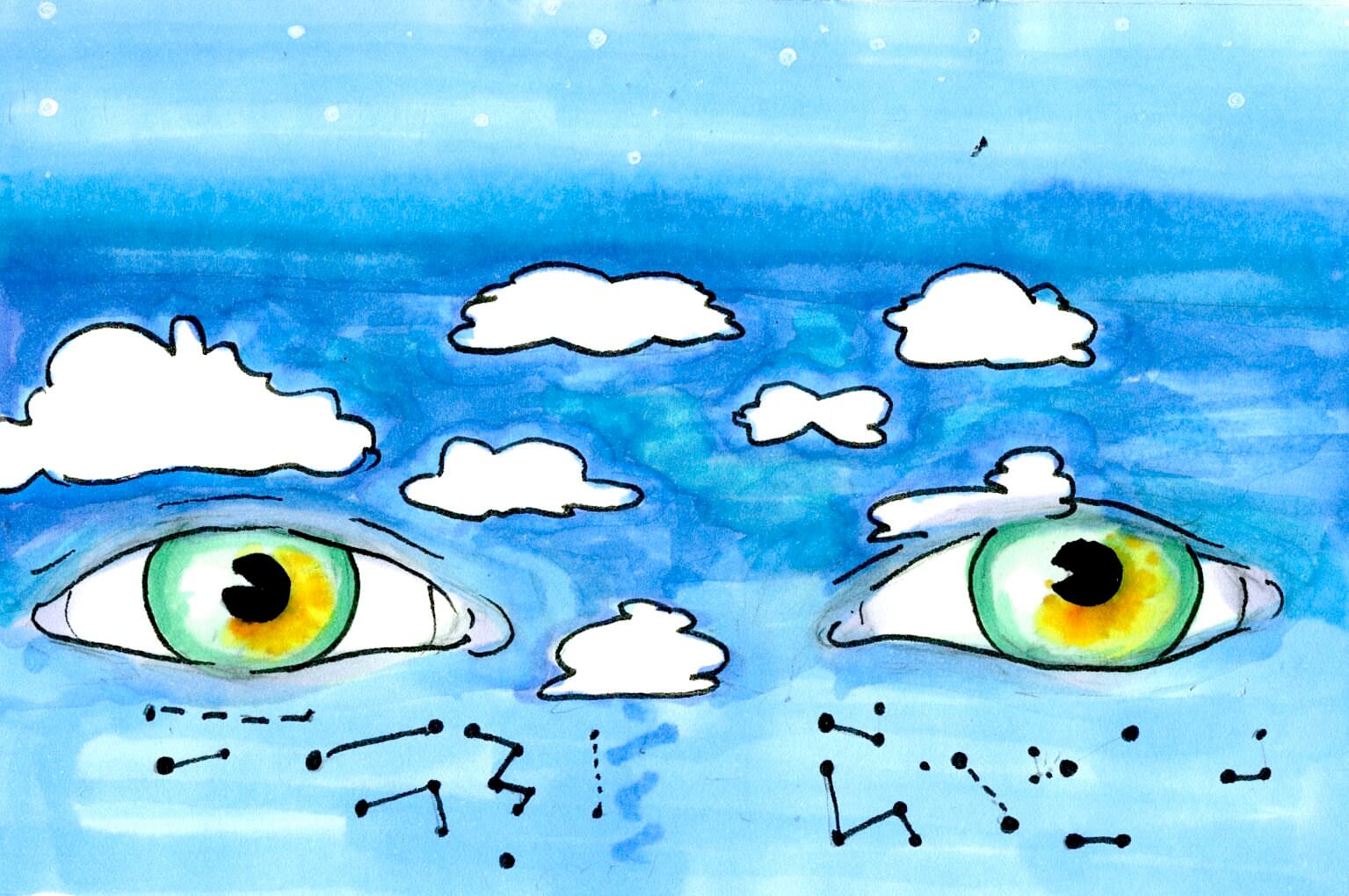 It was a sweaty Friday afternoon and Mel and I were having a playdate. We sat on the carpeted floor surrounded by dozens of popsicle wrappers, letting the fan blow on our faces while perspiration flicked off into the artificial breeze. It’s important to start from the beginning.

“You want another one?” I asked him, shaking the popsicle box and pulling the last two out. “I’ll take the other.” Firecracker ice cream required negotiation, especially on summer days when the heat felt inescapable, when the sweat pooled on our shirts and lined every inch of our skin until all we could do was wait for the sun to pass.

He sat for a moment, bathing in thoughtful silence before his teeth broke out from underneath his smile.

“It comes with a price.”

“Turn the fan a little more toward me.”

He did so obediently, that sugar addict, and his freckled hands gripped the fan, inching it closer to my face so that I was immediately enveloped in a coolness that felt liberating in the oppressive heat. Satisfied, I gave him his reward. We forgot each other for a moment, lost in the sweetness the pops left on our tongues.

“What would you do if I was in danger?” Mel asked, and I looked at him for a second, seeing a glazed-over look in his eyes and a meaningless smile plastered on his face. He held up the bare popsicle stick and stuck it in his mouth, grinding his teeth across the flat wooden plane as he waited for my answer.

“I would put a forcefield over you and try scaring them away.”

“Me too.” Silence draped over us again.

That summer our families drove to Disneyland, and in between road trip games Mel and I would stare out of our own windows. On the freeway, we felt fast, infinite, like we had power but not too much of it, like we were a part of something much, much bigger than ourselves watching the cars chasing after each other. The two of us would grip our seat belts until the stitches creased into the fleshy parts of our fingers, and stare out across the expanse of golden fields that wrapped around windmills and fence-enclosed cows.

“The white car speeds up!” I heard Mel yell, and I turned to watch him as his legs swung back and forth, with a single, measly index finger stuck far up his nose. I reached over the car seat and slapped his hand away from his face.

Mel continued to mutter to himself about the stories behind these cars, marveling when one passed another, basking in life’s big race, and knowing that the world was his game to play. I knew I shouldn’t have shown him Cars that weekend. I stared at his happiness and wondered how he could find such satisfaction in something so terribly simple.

Mel and I met in kindergarten, although we were oblivious to each other’s existence until the day we learned to write the letter F. I quickly picked up the movement, I was always a fast learner, and the teacher had commissioned me to teach the hopeless boy sitting across the classroom, with a pencil in his non-dominant hand and his face turning red with frustration.

I remember looking at Mel for the first time, unconsciously withdrawing even as I approached him. He had a reputation: the boy who ate string cheese without stringing it; the boy who broke all the new crayons, or wore them down until the rest of us were left with useless stubs. He never wanted to play normal games. He was the boy with crossed arms, who refused to open himself up to the world.

“Here,” I said when I got to his table, and I took his pencil and demonstrated slowly, and then quickly, and then slowly again. He remained quiet the entire time, and when he snatched the pencil away from me to try again with little success, I leapt backwards. We were caught in our cycle, me attempting to teach him and Mel attempting to prove me wrong.

After school, his mom approached mine.

“Mel over here wanted to say thank you,” she said, and I looked at the boy hugging his mother’s knees and hiding in her familiar shadow. I smiled at him, watching as he peeked in my direction. When the sunlight hit his face I noticed his eyes: a green sea with orange floating on its surface. Orange seafoam.

The babysitter slapped her hands against the marble counter. Every word that slipped from her lips was yelled at a shattering volume. The house seemed to shrink during every brief pause, as if sighing in the transient silences. I hid under the table, and tried to look as angelic as possible.

“Hey, kid!” she yelled, and I heard someone sniffle. “Spit it out!”

We were just playing with Play-Doh, I thought defensively, and I wanted, so badly, to shield his ears, to lock him away so that no one would hurt him.

“You can’t just eat it!” she screamed even louder, and I heard another sniffle.

And then there was silence. I heard the girl walk out of the kitchen with a phone gripped tightly in hand. There was a hardness about her that I sensed meant she would explode in about five seconds. Stealthily, I bounded into the kitchen—my spy movies taught me well.

For a moment I couldn’t find him. I thought Mel had disappeared when I spotted someone crouched in the corner of the room. It shocked me to see him look so small, with his knees pressing against his chest and the heels of his hands digging into his eyes. I crept toward him on my toes, trying to walk as lightly as possible. He looked that much closer to breaking.

All at once, the boy began to sob so loudly that at first I believed he was screaming.

There was no resistance in his crying—the violent outbursts, the inhales and exhales, the way his face shriveled up so that his tears dripped off only a third of his face. In that moment, I wondered if it was possible that he had released a sadness so strong that it wafted from inside his soul and pierced itself into my own. I could feel his sobs reach up from inside of me, I could feel the sadness scratch at my own throat. But this wasn’t important, because I had to keep him strong, I had to hold him up, so I wiped the moisture forming in my eyes before tapping Mel on the shoulder.

“Mel,” I said softly, and his crying stopped without hesitation. There were no knifelike heaves, no attempts to wipe away the snot running off his nose—his face turned to nothing. The tears evaporated soon enough, and once the last had disappeared into air, I realized how alone we were in the world. I tried, with my eyes, to reach out to him, to let him know that I saw him, but the kid just sat there, with this odd, hopeless fog across his face.

On instinct I embraced him, held as much of him as I could in my arms with love spilling off my fingers: I love you I love you I love you. At first he was limp, like he was so spent on crying that there was no energy left to even blink, but then I felt him reciprocate. I felt him hug with fervor, as if I was the only thing keeping him from falling off the Earth. At last, his chest heaved, and he let another shudder fall from his lips. I was relieved to hear him cry again. And, as he leaned against me, shaking and sputtering with more tears soaking the shoulder of my favorite shirt, I smiled to myself, not because I was happy to hear his sadness, but because I had been worried that a part of him was gone.

Mel walked into Ms. Walker’s fourth grade classroom with a backpack slung on one shoulder and checkered red-and-white Vans slipped on his feet. There was an odd way about him that I couldn’t place—he didn’t walk like he used to, and he didn’t hold his chin up like he always had. He kept himself tucked in, closed.

I pointed eagerly to the desk beside me, the same one that I had yelled at Janet to leave empty, and put two fingers in my mouth, prepared to whistle. But he glanced at me, stopped, and with a heavy haze over his face sat himself beside the other boys in the classroom. I wondered, dragging the rejected desk beside me so that I could prop my feet against it, why he was looking at me like he saw right through me.

At the end of the day I set off for home. I had already trudged a block over when I heard footsteps slapping the concrete behind me, and when I turned I was almost knocked to the ground by someone my size. Rattled with fear for my life, I hit the kid until I got a good look at him: It was Mel, with his backpack secured on both shoulders, looking almost the way I remembered him.

“Sorry,” he blurted from his left cheek to me. I put my arm through his, deciding to forget. That’s how it went: Apologies were absorbed as easily as compliments.

“You’re the only Asian girl I know who likes Justin Bieber,” the no-name boy from across the street said to me as I held my collectibles close. I was sitting in front of my house, on the patchy brown lawn my dad refused to take care of, when the boy approached me to see what I was reading. I looked around, refusing to let anyone see me break but failing to hold in the tear that fell from my eyes and landed on the magazine paper, seeping into my idol’s face and swirling the picture’s contrasting colors together.

“That’s not true,” I said softly, but no one heard me. I felt a wave of shame, and at once looking at the colorful Tiger Beat page was nauseating. I dropped the magazine to the ground and waited for the boy to leave before bringing my knees to my chest and drawing my face closed. I pressed my eyes into my kneecaps, wanting my vision to become a sea of black and for everything to dissolve around me.

When I opened my eyes I wasn’t alone and my magazine pages weren’t where I’d left them. Mel sat beside me, with his new glasses propped on the petite bridge of his freckled nose. He was quiet as he scrutinized the details of Justin’s water-blurred face, and he turned to me with a dimple in his cheek. His eyes smiled: two half moons that reflected the glimmer of the sun and that deepened the green-orange swirl coloring his irises.

“I think Justin Bieber is a pretty good-looking guy.”