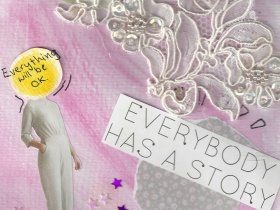 Everybody Has a Story

December’s theme is “Potential,” a word that can conjure both glowing, choral, Disney fireworks-over-a-castle feelings as well as extreme dread.

For as much as my brain is decked out in encouraging mottos (x-rays show it is actually a cork board from a very posi sorority house), I’ve also always resisted the expectation that people in high school ought to have their whole futures mapped out so that they may properly “live up” to their Potentials. George Saunders has spoken about feeling like he would not truly consider himself a writer until he wrote a story, and then it was once that story would be published, and then once it won an award, et cetera, so I imagine that unless some of Potential’s pressure is alleviated, it remains a source of anxiety until it bitterly gives way to regret, no matter how enriching a life you’ve led.

When we were discussing this theme, Lena described the pressure to reach your Potential and find your Passion, specifically as it’s shoved down your throat in high school: there’s an implication that “there’s a better version of you that you aren’t being at the moment,” at the same time that you’re constantly told to “be yourself.” In My So-Called Life, Angela says, “People always say how you should be yourself, like yourself is this definite thing, like a toaster or something.” In The Flick, Avery is asked why he’s depressed, and he says, “Are you serious?…Because everything is terrible?…And the answer to every terrible situation seems to be like, Be Yourself, but I have no idea what that fucking means. Who’s myself?”

It can be rewarding to shape Yourself from the outside in—I often use the way I dress to enact some kind of internal change, and artist reinventions like David Bowie’s can feel as real as they do performative. But thinking of Yourself as some tangible outside-person that you must imitate and measure everything against, is limiting. What if you find yourself passionate about something that doesn’t match this toaster-thing? I don’t think I ever love doing something because I’m like, “This is so typical me; very on-brand!” I love it because I love it, and because it allows questions of Who I Am to fall to the wayside. We have to spend our whole lives with ourselves, and so it’s thrilling when something can cause you to forget who you are or who you are trying to be, and then you come out on the other end with a newfound self-respect. It may not manifest as an extroverted personality or brazen confidence; just the gut knowledge that you have, in your life, taken immense pleasure in being a person, and are capable of doing so some more.

I’m frequently collecting ways to ensure that the blissful cork board that is my brain does not mutate into a big-ass silvery refrigerator used by parents to passive-aggressively impart motivation on their children in the form of Post-Its. Tracee Ellis Ross says, “I am learning every day to allow the space between where I am and where I want to be to inspire me and not terrify me.” Neil deGrasse Tyson told Rookie in 2012 that he was secretly disappointed that the Higgs boson particle was discovered, because it only confirmed physicists’ theories, and “sometimes when things go as you don’t expect them, major advances occur.” When asked if he’s ever intimidated by the vast percentage of the universe that we will never know much about, he said:

“The not knowing is the actual attraction of it. So many people only want answers. To be a scientist you have to learn to love the questions. You’ll learn that some of the greatest mysteries of the universe remain unanswered, and that’s the fun part. That’s the part that gets you awake in the morning and running to the office, because there’s a problem awaiting your attention that you might just solve that day. You have to embrace the unknown and embrace your own ignorance.”

“Living up to your Potential” may just mean going deeper into your uncertainty and immersing yourself in things that might not turn out to feel like Yourself but that you’ll learn from anyways. Being Yourself may mean letting your instincts respond and your synapses fire, and then if you need to summarize it into a 150-word college application essay after the thought, you will.

We have lots more thoughts about Potential over on our Submit page, and we want to hear yours, too, be they in the form of writing, photography, illustration, all of it! As always, ideas not directly related to this month are welcome, too. Your potential for making something great about the concept of potential is vast!!