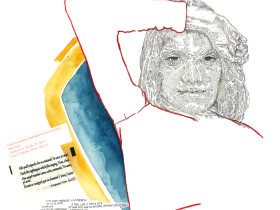 7. Do poster campaigns at your school and fundraise. 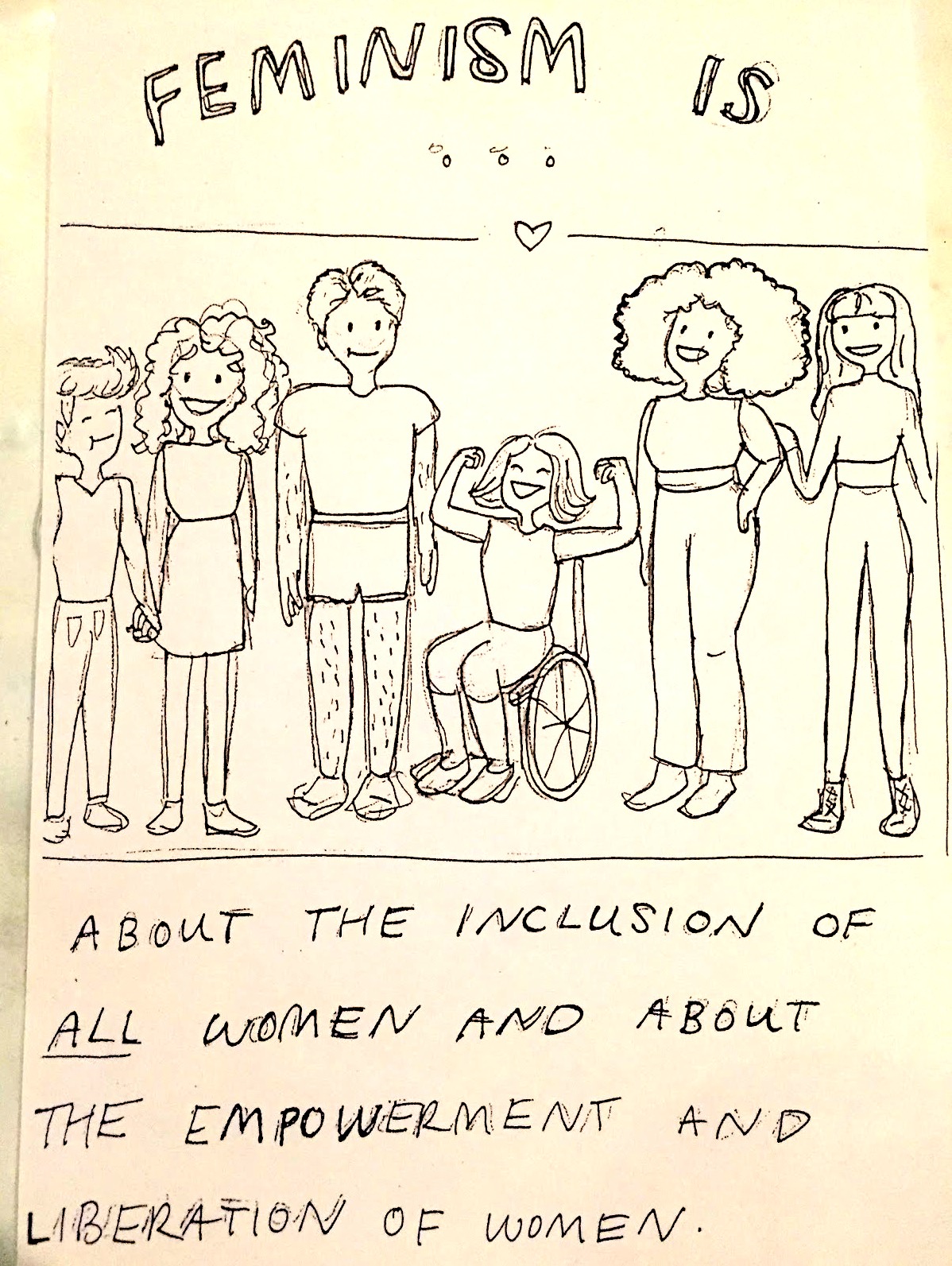 An example of the flyers we handed out on club day, drawn by my (Sienna’s) sister Dionisia.

Poster campaigns are one of my favorite things that we do as a club because they’re a really easy way to spread awareness about issues we’ve been discussing in our meetings. We’ve made posters explaining sexual harassment, cultural appropriation, and rape culture. Our posters include visual art and bold messages that grab people’s attention. For example, our posters on cultural appropriation read, “My culture is not a costume,” followed by an explanation of why cultural appropriation is harmful. We also make posters for Black History Month, with quotes by and facts about black women, and for Women’s History month to highlight cool women and their achievements. Posters are a super effective way to get your message across to the student body, and they’re super fun to make!

If you know of an organization or non-profit that strikes a chord with the club, find ways to raise money for it. Bake sales bring members of the club together and they usually raise a lot of money, especially if you hold them at local farmers markets as well as at school. In the past, we have raised money for Oakland-specific women’s shelters, and it feels really good to give donations directly to local organizations that truly benefit from them. 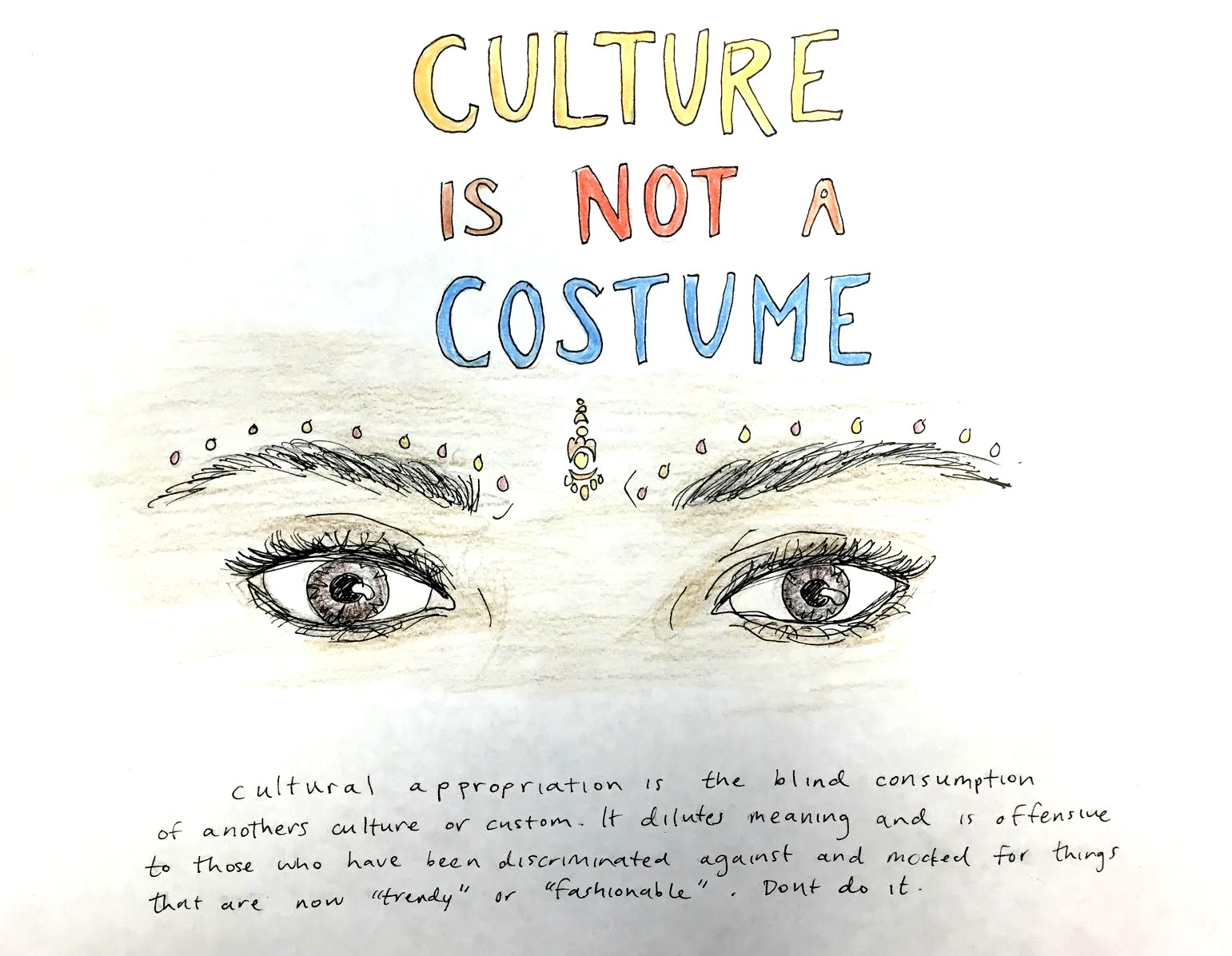 Here’s an example of one of our posters on cultural appropriation.

Getting in touch with local organizations is one of the coolest parts of Feminist Club. Last year, we held a tampon and pad drive for local women’s shelters as part of an effort to help women get sanitary supplies, which can become expensive and inaccessible when you’re struggling financially. We got SO MANY donations that it was really overwhelming, but super positive, obviously! This was part of our wider campaign to destigmatize periods and menstrual health, and the fundraiser was more successful than I could have ever hoped. 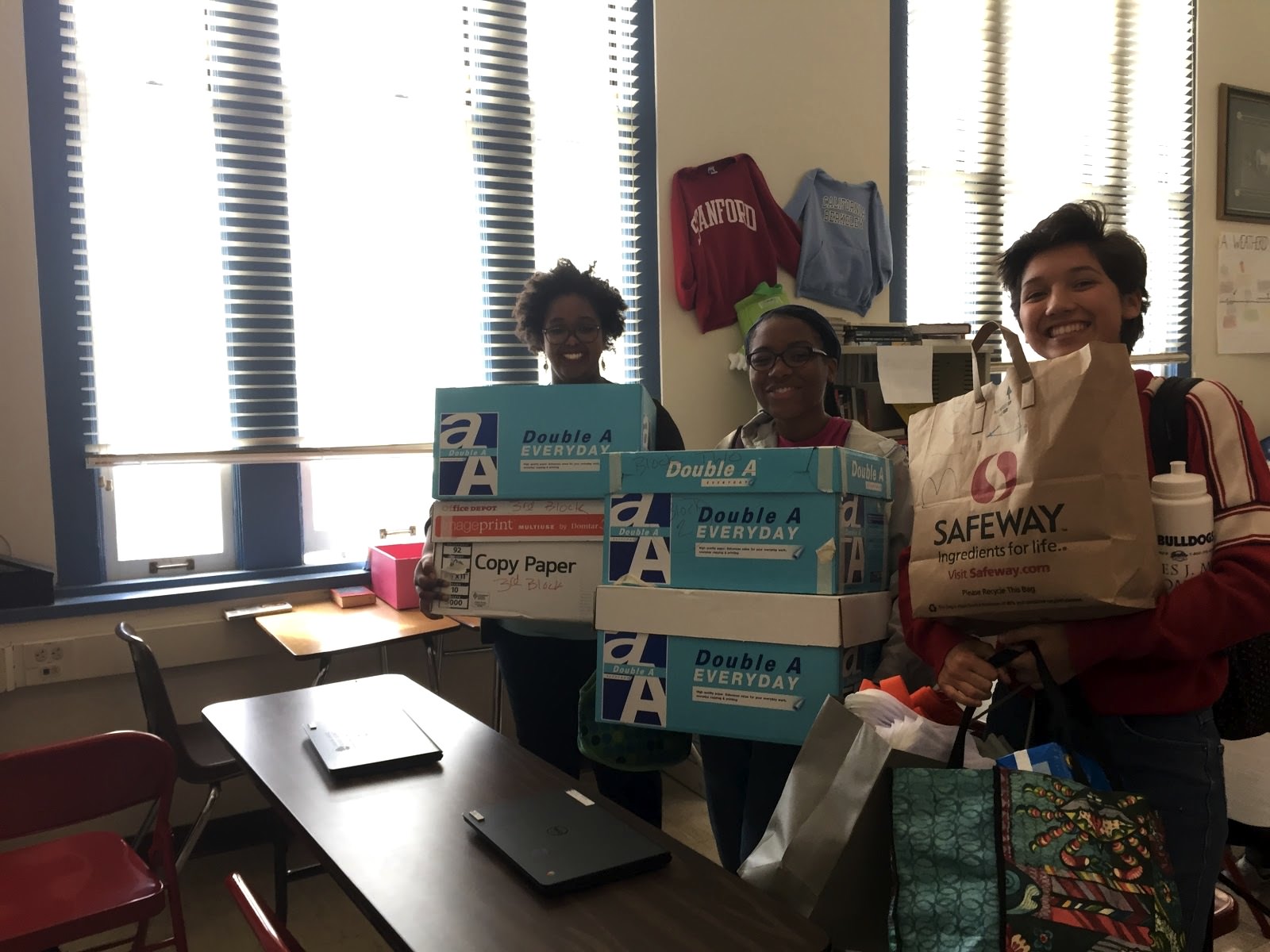 Left to right: Here’s Christina, Cammy, and Dio (squad crush!!) with all of the tampon and pad donations we received.

Contacting local organizations is an amazing way to make a positive impact in your community, and not just at your school (although, only doing things at your school is totally legit, too!).

Each year, we teach a freshman workshop. As freshmen are learning about the feminist movement in their history classes, we lead workshops on the basics of feminism and explain that intersectional feminism is so important because it addresses all systems of oppression and how they relate to each other, and feminism that focuses on a small number of privileged women effectively ignores issues faced by LGBTQ+ women or women of color.

Last year, Cammy and my sister Dio did a really great presentation that used Patricia Arquette’s comments on equal pay at the Oscars as an example of white feminism rather than intersectional feminism—wherein issues faced by women of color, are ignored by the mainstream feminist movement. We also asked students to give their interpretation of Audre Lorde’s brilliant words, “The master’s tools will never dismantle the master’s house,” to help them understand that exclusionary feminism does not address the vast experiences of women who do not benefit from our social systems because of their race, class, or sexual orientation.

These workshops are really cool because talk with students who are not members of Feminist Club about feminism. They see that the feminist movement still exists, is relevant to pop culture and to our lives, and is making strides toward inclusivity and intersectionality. This year, our goal is to do a teacher-education day inspired by the teacher education that the wonderful Queer Straight Alliance does at our school each year. We want to communicate with teachers about how to make their classrooms safe from sexist and homophobic language so that everyone in class feels valued, and equally comfortable participating.

Workshops like these can help spark the interest of people who may not have been interested in feminism before. Plus, sometimes talking feminism exclusively within the club is a bit like preaching to the choir: It’s important to engage people who may want to learn more.

Going on field trips is a great way to bond with your club and to experience cool parts of your city. We recently went to go see the documentary He Named Me Malala, and it was really powerful to be there as a group and experience it together. (We all cried but didn’t want each other to see, lol.) Another really great field trip was to the Ignite Women’s Conference at UC Berkeley. I couldn’t go, but club members who did learned a lot from awesome women who had made changes in their own city for housing and immigration rights. Take your club to exhibits, movies, or local art galleries.

11. What to do if there’s opposition to your club.

To be honest, there will probably be some sort of negative reaction to your club: Aggression toward anything related to feminism is almost guaranteed. If people threaten you or your club, or if anyone makes you feel in any way unsafe, contact the school administration immediately.

We’ve had to deal with plenty of hostility from people at school. Early on, this really bothered me: I took it personally when people tore down or vandalized our posters, or when people spread rumors about what we were doing. Now it doesn’t affect me as much, but I have to admit that it still hurts when I hear people disparaging our work.

There is a difference, however, between people giving constructive criticism and those who are against everything that you try to do. Those who genuinely care and want your club to grow will come to meetings and speak up with suggestions for things to do or things to change. There have been members of the club who came to all of our meetings—even those with just 10 people and me, struggling not to mumble—who would raise their own points and stay behind to offer me advice on what could be better or to suggest new topics to explore. Then there were those people who talked behind our back about all of the things that we weren’t doing instead of trying to make a change within the club.

The lesson I have taken away from everything, is that the best thing to do as a response to outside negativity is to keep building the club from within, and to remind yourself of the love and passion that started the club in the first place. People can always find something ugly to say, but if you keep going your club will empower and educate its members, and you, just as you hoped it would.

And to get through especially hard days, I read this quote from Audre Lorde’s essay collection, Sister Outsider, and it has never failed to lift me up:

Once you start to speak, people will yell at you. They will interrupt you, put you down and suggest it’s personal. And the world won’t end. And the speaking will get easier and easier. And you will find you have fallen in love with your own vision, which you may never have realized you had. And you will lose some friends and lovers, and realize you don’t miss them. And new ones will find you and cherish you. And you will still flirt and paint your nails, dress up and party, because, as I think Emma Goldman said, ‘If I can’t dance, I don’t want to be part of your revolution.’ And at last you’ll know with surpassing certainty that only one thing is more frightening than speaking your truth. And that is not speaking.

We hope these tips help you get a head start on what to expect and how to prepare for starting an intersectional club at your school. It took a lot of mistakes for me to learn important lessons, and this endeavor has not always been easy, but I would not trade this experience for anything. If you decide to start your own club, good luck! And know that there will always be people here who support you no matter what! ♦