You don’t have to lose yourself in the crowd. 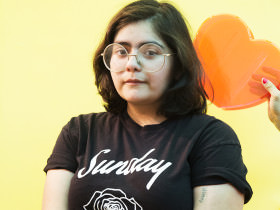 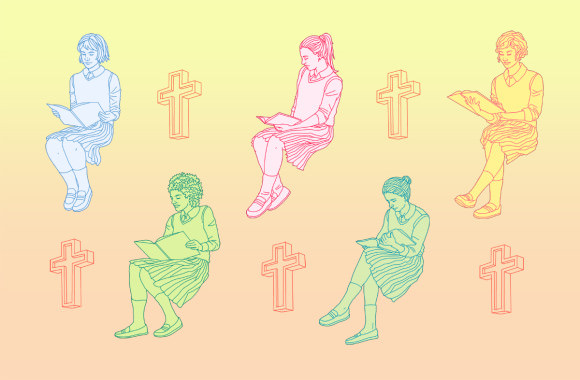 If there was a Venn diagram to map out where my strongest dislike lies, the left circle would say “Groups,” and the right circle would say “Forced Emotion.” Where they overlap would be every required communal gathering of childhood—summer camp, pep rallies, youth groups—meeting in the form of my worst nightmare. These moments were embedded in my school years, mostly in various gatherings and assemblies, all through which I not-so-humbly suffered, eyeballs fixed in a perpetual roll, right foot locked into an imaginary drum-machine setting called “impatient tap.”

“Considering those examples,” the casual observer might say, “the hallmarks of the conventional American upbringing must have been inconvenient due to your instinctual frustrations.”

“Correcccccct,” I’d hiss, while a hell-mouth cracks open and fractures the ground behind me, swallowing me up as I take every drum circle, drama club, and well-meaning after-school group leader with me.

This hostile reaction may not come across as “normal,” or very kind to others. Bonding occasions like assemblies, where clapping hands and stomping feet and kumbaya-ing happen, bring with them many people’s most comforting moments. For some reason, all of those things grated me, and yes, it was very inconvenient. Especially because at the epicenter of the Groups/Forced Emotion diagram was the major touchstone of my high school experience—Catholic school.

My all-girls’ Catholic high school was where community was an enrollment marketing strategy and bonding was a word used by many of my peers with genuine joy and not a trace of irony. By any definition, I should have hated every minute of it with fiery dedication—especially mass day.

Mass day happened roughly a dozen times each year. On a typical mass day, class was cut short to accommodate the journey to the chapel up the hill, where we would endure a 90-minute service. The student body generated a quiet stampede as we exited the school building and swarmed our way to the parish, our chatter hushed by the warning looks of nuns, and our feet silenced by the soft padding of the ballet flats we all wore in 2008. If “detached from the group” is where I felt most comfortable, then the 600-odd girl-train chugging three blocks uphill from campus to chapel was my personal pilgrimage of pain.

If anyone I knew from the outside world spotted me there helpless, shoaling like a fish toward a ceremony for a religion I would never identify with, with a school I never even liked in the first place, I would have crumpled into a ball of humiliation. Being required to group in this way was against the core of my identity, the bulk of which I was still figuring out at the time. But I knew enough to be convinced of the following: I was fierce about my autonomy, I was certainly not religious, and if you told me I had to do something and the only reason was, “Because I told you so,” then I would run as fast as I could in the other direction. It wasn’t so much that I was upset about going to a Catholic mass; it was the feeling of losing control in a herd of what I considered to be sheep.

Sometimes, though, when you sit with your discomfort long enough, what meets you there is surprising. My resistance to mass day sprouted some unlikely responses from my low-key rotten core, like the start of a new potato budding from a decomposing one. Sitting there in the pew, shoulder to shoulder with hundreds of other girls, I noticed myself contending with the emotional push-and-pull of reluctance to being in the group, while simultaneously being swept into moments of near-mystical connection.

There was the contrast of one voice echoing from the altar during a reading, followed by the humming chorus of “Amen” and the hefty, audible sweep of bodies moving in tandem from their seats to standing. Then there was the sound of those bodies sitting down again. The antique pews creaked slightly as everyone shifted against the person beside them to get comfortable again. When someone else’s knees bump yours, you are reminded that you aren’t alone in your head. These mini-rituals were strung together throughout mass, and gave me moments to space out, contemplating eternity or whatever else was beyond the big, stained glass windows. These moments allowed me to lean into the group in a way that, due to so many masses over the years, felt instinctual.

I was unwillingly attacked by the tingles you can get when everyone sings or murmurs along to the same words in a large, reverberant room. I didn’t ask for this, or expect this! I thought I hated being here, I said to myself. Why do I feel, like, one with the group right now? It might have been the procedural, tempered flow of the rituals that calmed me, or the vibration of the music that rearranged some chemicals in my brain. Or maybe it was some sort of intuitive sense that arose from being there, and noticing that the entire reason for this gathering was derivative of an ancient striving to connect to universe in some way. The 10-story church I was stuck in was deliberately designed for the sound waves to resonate in a way that hits a person to their core, and inspire one to seek a connection with God. That mind-bending thoughtfulness led to another realization: that the whole world, in a way, is also designed for a person to not feel alone. In going through the motions with all those people, there was something to be found—even if it went against my ego’s grain. Through that discovery, I was able to appreciate a sense of holiness in a religion I didn’t even believe in.

Unexpectedly, mass day made me more receptive and willing to let go of myself, to let my restlessness fade out, and to learn to be just another head in a sea of heads. Because of it, I’ve been able to move through populated spaces differently, feeling like I have the secret code to unlocking reverence. I found it when I went alone, suffering through a cold, to see Beyoncé in concert, where I was sandwiched between a couple and two teenage boys. I find it when I watch grainy videos from the ’70s and ’80s of Bruce Springsteen, his voice contending with thousands of screaming ones as he performs bombastic anthems that speak of the acute and intimate sparks of love and magic. I feel it more acutely now when I’m in the car with my friends, or at a wedding or birthday party or a funeral. There is something we can’t see that holds us together.

Being forced to participate once made me feel like my emotions, while I was in those groups, weren’t mine. But isn’t that what empathy is—the ability to share in a feeling? If I took the opportunity to go down that empathic avenue, I’d arrive someplace I still recognized—just with the help of others’ energy. Magic doesn’t always dilute when it’s spread across multiple people, multiple vessels—it amplifies, sometimes, when the group is right. Slipping into the feeling of the gathering—even if it meant relinquishing some control—didn’t mean I would ever lose myself. ♦