The musician makes a case for finding beauty in nature. 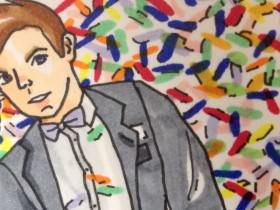 One in a Million

Computers and phones can make it easy to forget that there’s nature out there, and that it’s often overwhelmingly beautiful. Mizan K is here to remind us of that. In the music video for her song “Awe,” premiered below, the singer-songwriter shows us that happiness can be waiting right outside the door.

Earlier this week, I talked with Mizan K about “Awe,” the power in simplicity, and collaborating with friends.

MIZAN K: “Awe” is about remembering to look around at nature, and remembering to be in awe of existence as a way of finding happiness. I’m talking to and about a friend who doesn’t do that enough. In the song, I’m talking with someone that I would like to remind of the beauty of nature, and of the beauty of existence, and to pull them out of their sadness and their indifference. The video illustrates that point, in that it’s a DIY video.

“Awe” also borrows from “Morning Sunrise” by Weldon Irvine. [The song features] an interpolation of the chord progression. I wanted to reference “Morning Sunrise,” because it’s also about the beauty of natural phenomena. “Awe” is sort of like my modern, electronic part two of that song.

You’re also alone in the video. Can you talk about solitude in nature?

I didn’t choose to be alone. It was me and my friend, and we had a camera and tripod. We were sneaking around New York Botanical Garden, even though we weren’t allowed to film. We were trying to avoid the security guard, and it was 95 degrees outside. It wasn’t really planned that I’d be alone. I just couldn’t make it so obvious that I was filming. In a way, I didn’t want to distract from the nature that’s in the film; I really love the look of the flowers. I wanted to keep it simple, and not a story about a person.

You direct all your videos. Do your life experiences influence how you craft visuals for your songs, and vice versa?

The thing that distinguishes the videos I make is the fact that I use film. I’m not exactly sure why and when I started being fascinated with the look of film, but it adds a layer of texture. I love that. I try to use film for everything I shoot—not [for an] aesthetic, but to make the mood deeper. Everything looks good on film. I also collaborate with my friend, Str8ngecreature, who’s an artist. We write music together. We’ve known each other since we were 13. He’s an influence on the aesthetic as well.

I love that you collaborate. Can you talk about how that friendship influences the way you both create art?

When I first met him, he was a 13-year-old genius. He used to make collections of songs and instrumentals he had recorded. He made [around] 20 songs every six months, every year. He was the best artist in high school. Then, I didn’t see him for a while. We both went off to college, but we maintained contact.

When I decided to move to New York, he was going to Cooper Union [in Manhattan]. I ended up moving 10 blocks away from him, just completely by accident. We started working together. We really have a similar point of view when it comes to our work, and we have matching personalities [when it comes to] taste, art, and music. We enhance each other’s work. We’ve been great friends and great collaborators for a long time now. ♦