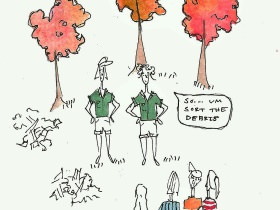 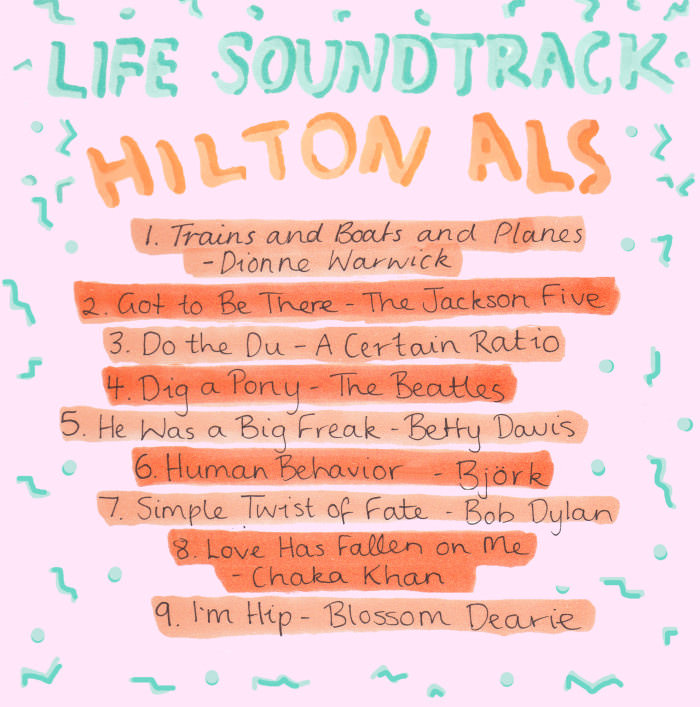 Hilton Als is the author of the books The Women and White Girls and is a theater critic and writer for The New Yorker. The way he recounts experiences such as love, art, grief, and friendship can make a person feel like they are understanding, for the first time, subjects they already know painfully, blissfully well. Here, he introduces us to some of the songs that have shaped his life, much of which has been lived in New York City.

1. “Trains and Boats and Planes” by Dionne Warwick

This song is so important to me on so many levels. I must have first heard it hanging out with my four older sisters who are much older than me; they’d play 45s while they got dressed to go out. Dionne was a perennial favorite, in part because she was so witty about longing—in the songs she sang written by Hal David and Burt Bacharach everyone was a fool for love. “Trains” made an indelible impression on me; the rhythm of the words influenced how I saw and felt words.

Growing up we lived in a number of different neighborhoods in Brooklyn, but this song always brings to mind my adolescence, which happened in Crown Heights. I was in love with a guy named Arnold; he had black curly hair, and he lived near us. It was summer; I must have been 12 or 13 (the song came out in 1972), and I used to go to Arnold’s house and watch him sleep. I was intoxicated by his smell. “Got to Be There” played on the radio and it was every moment that I spent watching Arnold nap and waiting for him to wake up and see me and hopefully love me.

I loved my friend Valda who died of cancer almost 10 years ago now. She was one of the people who introduced me to New York nightlife. The city was very dangerous and exciting in the 1980s, and Valda was well known at the Mudd Club and Save the Robots. Save the Robots was an after-hours place, it had a basement and there, in the dark, you’d dance to wonderful English-based bands like A Certain Ratio that combined elements of ska with disco and disco with reggae. The beat carried you along, and before you knew it was almost six o’clock in the morning and time to eat pea soup at Veselka before you had to get dressed for work.

A surrealist masterpiece that means many things and nothing, too. It feels like the weirdest kind of ballad, but it’s faster than that. I can’t describe it musically but I think I first heard it when I was in my twenties (I was late coming around to the Beatles). I think what got my attention was how visual their words were, and the visual—that was so interesting to me. I was 22 and an art history major at Columbia University and the world was opening up culturally in many ways, and even though the Beatles were “old” they made me see how very new they always would be.

For a time Betty Davis was married to the great jazz artist, Miles Davis. I didn’t really know her music until the early 1990s, when I was a DJ at a club called Bar d’O on Bedford and Downing Streets in the West Village. It was a great experience, a great small lounge where I played records; my payment was some scotch and amazing company. My friend, the artist Darryl Turner, lent me some of his records for those Friday night gigs—I was afraid of growing stale—and one of the records he gave me was this Betty David gem, which was, I learned, about one of her lovers: Jimi Hendrix.

I was working as an Editor-at-Large at Vibe magazine then; Björk’s first solo album, Debut, was released in 1993 and it was like hearing a voice you recognized and didn’t recognize all at once—something you remembered hearing from the womb, really. She hit hard in part because she was that rare thing: a singer who talked about her optimism, and desire for more: more love, more fun. We tried to have that energy in the pages at Vibe, and I look back at that time as extraordinary and beautiful and filled with hope: we reported on a multicultural world that was just beginning to make itself known, really.

As with the Beatles, it took me many years to understand Bob Dylan (I am not partial to guitars) and it was his shattering ability with words that finally got to me. Also how much narrative sense he makes. My best friend and greatest love, Kevin (he died in 1992; AIDS), loved Dylan and so many artists I had not been exposed to previously. I can’t remember when I first heard this song, but I relate it to Kevin, and my love for him. I think of him every day. This song feels like my yearning for him.

8. “Love Has Fallen on Me” by Chaka Khan

When Kevin died, I played this song every day for him for years. Because everything the incomparable Chaka sings here we lived. I think we still live it.

I live in New York still and I never miss an opportunity to imagine that everything Blossom embraces/makes fun of is still possible. ♦