“I trust my artistic path, no matter where it takes me. I’m not afraid anymore.” 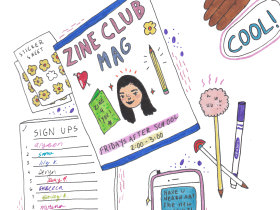 How to Start a School Club 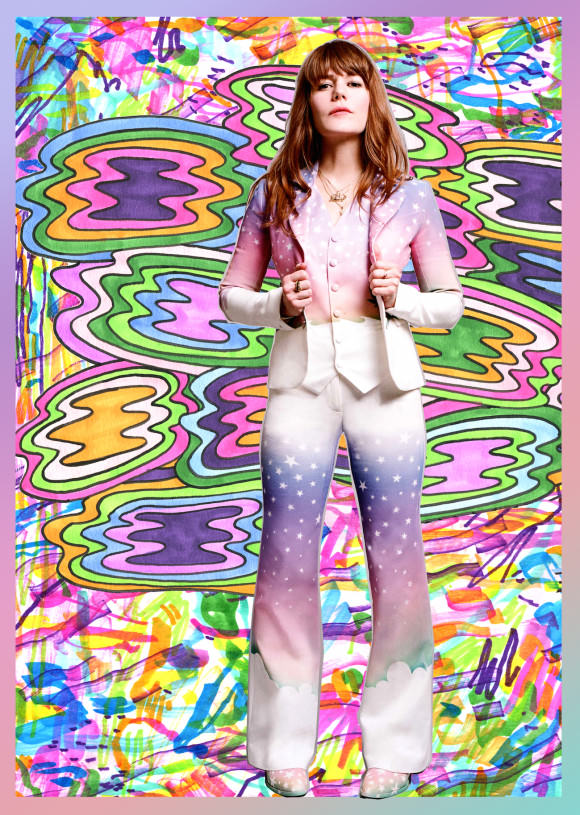 Jenny Lewis’s nearly two decades-long career as a musician is really something to behold. She’s recorded three solo albums and six with her band Rilo Kiley, and she has collaborated with acts such as the Postal Service, the Watson Twins, and Elvis Costello. In January, the former child actor and California native will re-issue her beautiful, first solo album, Rabbit Fur Coat, which will be 10 years old!

I talked with Jenny about becoming a solo artist, how the meaning of her songs has changed with time, and how to keep fighting to get the sometimes-elusive creative results you want.

HAZEL CILLS: When did you first get the urge to start writing music?

JENNY LEWIS: My mother’s record collection was really amazing. I grew up listening to a lot of female singer-songwriters, and that’s what sparked my interest in songs. But when I discovered hip-hop–that was my music, the music I didn’t share with my mom. That’s when I started writing lyrics. The words came first, before the music for me.

Some singer-songwriters scrap material they know won’t work right away, but some hold on to everything. Do you consider everything you write potential material?

I just write shit down constantly. I have shoe boxes filled with barf bags from airplanes that I’ve just written aimlessly on. I collect all these scraps, and I’ll occasionally go back and lay them out and write something from them. But there’s a ton of stuff that doesn’t get used, or verses that are cut or altered dramatically. [When] working on The Voyager with Ryan [Adams], I would come in with what I thought was a complete song and he’d cut verses out. It was cool to have a perspective like that.

You’ve said that Rilo Kiley was sort of a group of outcasts when you started playing music in the ’90s. How did you make your own scene?

We certainly were outcasts in our minds and hearts. Blake [Sennett] and I had come from this background of child acting and passed out, in a way. In the beginning, we were almost apologetic about our pasts. We collected fans in L.A., and then our world bumped up against Elliott Smith’s world and that guided us along.

When Rilo Kiley released Under the Blacklight, some fans were mad the group was going to a major label. How do you shrug off widespread criticism of work you really care about?

That was such a weird period, when we were making that record. I think it’s inaccurate to blame a major label—we were just an indie band working with a major label. We were really passionate about those songs. Only time will tell…If it’s good, it will last. If it’s not, people move on. People say things all the time. You have to just keep writing and keep working, you can’t get hung up on whether people like it or not. And I don’t think that’s a perfect record, by any stretch. I like some of it more than I like some of the other songs, but I certainly don’t know if it deserved the hatred. I think it was also linked with the video that came first, “The Moneymaker,” which I play in my set now. [Laughs] Not only did people hate that song, but they hated the video directed by Autumn de Wilde, which was a long-form video about pornography. It was a bold move to make.

You were an actress before you were a musician–something you poked fun at in your “She’s Not Me” video. You were essentially the breadwinner of your family as a teenager. What did you learn during that time in your life?

That’s a big question! I started supporting my family when I was three years old, so work was always linked to my family. Part of the reason I started playing music was because that was something that was my choice. But I wouldn’t change the past, because I learned so much from a young age. I also learned how to work eight hours, and to learn my lines.

Music was purely artistic. When I started making music with Blake, we played our songs in living rooms for our friends for years before we ever got on stage. It was unadulterated art, unexploited. It’s why I cover that song “Handle With Care”—the lyrics really speak to that. That’s also why I think having come from Hollywood, growing up there, Rilo Kiley was this sacred thing, and it wasn’t going to be tainted. It was a very pure institution.

You write a lot about your personal life, and you also fictionalize it. Is music as much a catharsis for you as it is a way to rewrite parts of your life?

I almost create things in my songs. Sometimes I feel like a psychic songwriter, where I’ll create a scenario and then five years later I’ll find myself in it. Like, wait a minute! What came first, the song or the experience? But there’s a lot of truth in my songs. Much of it is autobiographical, I wouldn’t deny that. With poetic license, you can flip any situation or character. I never want to nag [too much] in songs, or nit-pick or finger-point. I’ve written a lot of angry songs, and they don’t hold up as well. If you think about all the Beatles songs, they’re all about love. As you grow as a writer, you think about things you want to write about, the angry stuff sort of slips away–some of it!

Do those songs not hold up because they feel more specific than a love song?

It’s the resentment; I don’t want to identify with it. A love song can always exist.

How does it feel to know so many people relate with “A Better Son/Daughter,” which sounds like a very personal song?

I still play [that song], and it’s relevant every night I play it. That song is not an angry song, and it’s raw. It moves me [when] I catch someone in the audience singing along to it. There’s an element of hope to it. A girl came up to me the other night in Canada and said, “That song saved my life.” There are some pretty specific lines that I’m not sure everyone can relate to, but the mood of the song, the feeling, transcends specifics.

Finishing and releasing The Voyager took almost five years. What kept you powering through, without scrapping it or giving up?

Music is what makes me feel better. Despite going through a rough couple of years–my dad died and all this shit happened–going into the studio and working on the record is truly what pulled me out of it. It wasn’t an option to not keep moving forward.

Did finishing the album make it feel like you had reached a better place emotionally?

Absolutely. You can hear it in the songs, just in the order of the way they were written. That’s why I wanted to call it a voyage. And, it’s partly named after a motel, but the idea was just this journey of a woman over an eight-year period, which is a generation. Having put it out and touring it for over a year, the songs keep revealing themselves to me. It’s sort of reaffirmed my love, and gratitude, for playing music. [I’m] able to feel something, write about it, play it and then move on.

You talk about your songs like they’re tarot cards, they sort of say different things to you at different times in your life.

They do. Some of those songs still really resonate with me. Something I wrote in my early 20s or late teens will come back around and feel relevant. I don’t have any kids, so my songs are like my kids, and there are a lot of them. I think things will evolve [with Rabbit Fur Coat], but I have to start where I left off. Who knows what my songs will be in two months when I get off the road.

From Ryan Adams to Blake Sennett, it seems like you’ve worked with people who’ve really challenged you, or maybe there was some head-butting in the process?

Ryan and Blake are basically the same person. It’s like a two-headed monster. [Laughs]

Do you think tension among collaborators creates better music?

I wouldn’t say it’s better, but it’s definitely different, and I certainly operate well under those circumstances. I like a little bit of a fight. I hate them both, but I love them, and they both know their way around my tunes. Hopefully it doesn’t always have to be tense, because that takes years off of your life. It’s why I’m not in a band anymore, it’s too much on a day-to-day basis.

Now, as a solo artist, when you want the input of other people you’re not saddled with it.

Yes, and that’s the joy of being a solo artist. There’s a flip-side to that, which is that you’re sort of at the mercy of your own decisions. I can work with Ryan and then walk out. I can make something in…Jamaica, or whatever! I love the freedom of that, but when I first left my band I was terrified of it. It was a scary thought of not having your gang, your family, and having to make those choices. I feel confident as an artist with a solitary vision. I trust my artistic path, no matter where it takes me. I’m not afraid anymore. ♦