Owning It: An Interview With Hailee Steinfeld

The actor and singer on confidence versus cockiness, self-love, and her new EP, Haiz. 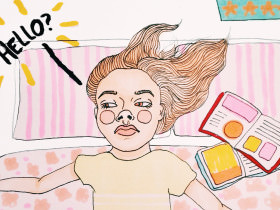 How to Adjust to Living Alone

Hailee Steinfeld has portrayed iconic characters like Mattie Ross in True Grit and Juliet in that one love story that’s kind of famous, but on Haiz, her new EP, she’s most concerned with being herself. We first got to hear the Oscar-nominated actress sing in Pitch Perfect 2, and her first single, “Love Myself,” basically defined my summer. I talked to her about the similarities between acting and singing, loving thyself, and Haiz’s other infectious offerings.

TAVI GEVINSON: Do you find that there’s any crossover between the emotional experience of acting as a character and performing or recording a song?

HAILEE STEINFELD: In the beginning of my process, I didn’t write. I would sit in writing sessions and I would be curious, and ask questions, and be fascinated by how the whole thing worked, but I didn’t physically write. There’s this judgmental thing that you automatically ask for when you don’t write your own music—you’re looked down on. But I realized that I’ve never written a script of a movie that I’ve done: All I do as an actor is connect to the words that are written on the page, which I can easily do with a song. As an actor, music is a huge part of my preparation and my life and world. When I’m making a movie, I’ll make a playlist for that movie and that’s all I’ll listen to the whole time. That’s one thing I realized, right off the bat, that I was never ashamed to say, “I didn’t write this song, but it resonates with me.” Now, obviously, that I have started to write, there’s this sense of vulnerability—in that that’s my name and my voice and my experience, not a character, no matter how much I’ve related to that character or identified with that character.

I think it’s fascinating that a screenwriter and an actor, or a songwriter and a singer, can connect over something that isn’t 100 percent either person’s. What first drew you to “Love Myself” and why did you want it to be the first song that people would hear from you?

I wanted movement. I have slow, ballad-like songs, but I wanted to make people move, I wanted to see people smile and to make people feel good. [The song has] such a strong message that I, in my life, forget all the time. It’s been so amazing because, in releasing this song, I’ve gone through really crappy stuff in a relationship. Like, I just hung up the phone with this guy who ended things and I have to go do promo. But the song I’m doing promo for is “Love Myself.” It’s like, “Man, I just have to sell it! This just has to be me, and it’s gotta be my thing.”

I can only imagine the psychological effect of singing “I love myself” over and over.

For sure! Somebody said to me, “How much self-confidence do you think it’s important to have without being cocky?” But having mottos and positive messages in your mind—if they make you feel that good about yourself, well then, amazing. As long as you feel good, and it makes you feel like you can make other people feel good with it, that’s the perfect balance.

They asked that?! Having self-respect doesn’t necessarily mean…

That you’re cocky or full of yourself. I know. It took me a minute, too. I’m 18, I don’t always feel confident, I don’t always feel amazing, I have my moments of insecurity and not-great days quite often. But there’s nothing wrong with [confidence], as long as you’re not rude to other people!

What do you do to rise above those moments of insecurity?

A lot of the time it’s going in my room and turning my phone off and closing my door and not doing anything. Sometimes it’s that same thing but listening to music. I have some form of paper and pen in my bag at all times and I jot down anything I’m feeling. Even if it’s just notes in my phone, I’ll write something in.

Do you remember what the playlist was like for the last film you shot?

Before I did Pitch Perfect 2—that soundtrack was built in for me—I made a movie called Ten Thousand Saints and a film called Term Life, and there were a lot of similar songs on both of those playlists, a lot of Black Flag, Ramones, Sex Pistols. I don’t listen to that on a daily basis but my character in Term Life was a music nut. I’m thinking of another movie I did called The Keeping Room, where I have three songs where, if they do come up on my daily shuffle, I will have to skip them because they’re so [connected to] that experience for me.

What drew you to the song “Rock Bottom” on your EP Haiz?

I feel it speaks to so many things—not necessarily a relationship with a significant other but a sibling, or a pet, or anything where you’re just like, “Ohmygod you ate my favorite pair of shoes and I hate you, but you’re my favorite thing in the entire world!” Or, “Ohmygod, I said I was going to throw a party tonight! Brother, can you not be so friggin’ annoying? I hate you right now!” Or when you’re in that relationship and you’re like, “Why can’t we make things work? We’re doing everything right but it’s just not working.” But there’s also a weird sort of positivity to it, being on the right side of rock bottom.

It’s actually, surprisingly, taken people longer than I thought to catch on to it! But, I mean, listen—it is what it is. I have nothing to be ashamed of, and the reaction has even been like, “Is this…ohmygod, this is what that song is about? Dope, man, that’s awesome! OK, cool.” But the lyrics are subject to the listener’s interpretation. I’ve had people on social media make vines interpreting [it as] they will, and I’ve had little kids jumping up and down in a classroom singing this song saying they love themselves. I’ve realized it’s revolutionary to be able to say, “I love myself,” whatever that means to you.

The song is ultimately about taking care of you, whether that means physically or emotionally. That’s not to say it’s not nice to have someone provide for you, but the song represents how much power there is in providing for yourself. I did a bunch of phone interviews with people in the UK and people were like, “Is this song about having a wank?” And I’m like, “I almost want to say ‘yes’ because of how great you just said that.”

It was something I thought about in the beginning, How people are gonna perceive this and how people are gonna interpret it? I’ve done movies and films where I have…I mean Romeo and Juliet, there’s a love scene, and even though it’s implied and not fully shown, it’s there, and it happens, it is what it is, there’s no way around it. Just like singing a song, it’s a message I’m proud of. I would never put anything out there that I wasn’t comfortable with or wasn’t proud of. So. I’m owning it.

Yes. Like, you think these are gonna be love songs, but actually…