A story about healing. 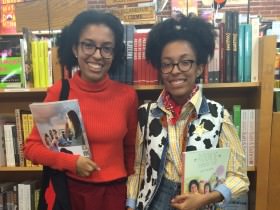 On the Road With Rookie Yearbook Four 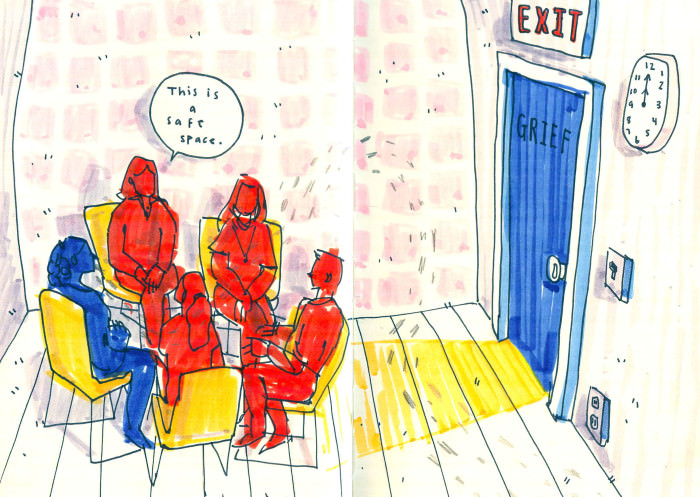 I got the idea to tell this story in the summer of 2010. It was four in the morning, and I was sitting in my bathroom crying because the basement of my house was flooding for the second time in a month. I couldn’t stop the water from coming in, just like I couldn’t stop the other shitty things that were happening in my life—the writing career that, it seemed to me, was tanking; the illness affecting my beloved cat that had been getting worse and worse all year; and the depression that had been getting worse and worse for two years, ever since three of my friends died unexpectedly in a six-month period.

This could be worse, I told myself as I listened to my husband trying, unsuccessfully, to suck up the flood water with a shop vac. It’s just the laundry room and the den down there. It’s not somebody’s bedroom. Or even worse still, the bedroom of a dead loved one, containing all that I have left of them…Hey, wait, that could be a story! Because that’s how my mind works.

Over the course of the next couple years—as the beloved cat got sicker and eventually died; as I went back to therapy because I was unhappy in my career; in my life, and as my therapist pointed out, I was still grieving—I worked on this book.

It’s about a girl named Meredith whose older brother Justin died right before her 16th birthday. (And yes, his bedroom is in the basement. And yes, it floods.) Even though his death has left a big, gaping hole inside her, Meredith just wants to have a normal life. Actually, she wants the life she was supposed to have if Justin had lived. He was a musician, about to move to the city with his bandmates, and he’d promised Meredith she could hang out with them. So, Meredith starts sneaking out to punk shows. One night, she’s so caught up by the performance of a friendly girl named Kat that she misses the last bus home and is forced to call her aunt Holly for a ride. Holly agrees not to rat Meredith out to her parents and to take Meredith to get her license, but only if she goes to the support group she ends up nicknaming “Grievers Anonymous.”

For those of you who have read my book Ballads of Suburbia (another book that I wrote by thinking, What if I took this thing from my own life and made it worse by… you get to see the grown-up version of Cass. Her role here is inspired by my therapist, a woman named Liz, who helped me through my own grief as I wrote this book. Sadly, Liz would also pass away far, far too young. This is for her and for anyone who has lived through loss.

The full book, which is tentatively titled Grievers Anonymous, is not done yet; I thought it was but now I am rewriting it. Writing is a process in that way. Like grieving. Like healing. This is the second chapter, and I hope you enjoy it.

Only eleven sessions left, I told myself as I walked into group therapy.

It was the first day of June, a gorgeous Wednesday afternoon that would’ve been perfect for a long run in the forest preserve behind Abby’s house. Instead, I was going to spend it trapped in a stuffy, white room with eight to 10 other kids, watching flecks of dust dance in the sunlight at the center of our lopsided circle and praying that the counselor, Cass, wouldn’t call on me.

I’d spent the first three weeks doing my best to avoid her roving gaze, but the art of invisibility that I’d perfected in my classes didn’t work in such a small group. I thought I was getting by with shrugs and one sentence answers, but last Wednesday, Cass had held me back after everyone else left and said, “I want you to share something next time, Meredith. You don’t have to talk about what happened if you’re not ready to, but I’d like you to participate more than you have been.”

I slumped into an open seat on the side of the circle facing both the door and the clock, so I could see, and countdown to, my escape. Hopefully today we’d be doing some sort of activity. That would be easier to bullshit than the general feeling or memory sharing. We all had workbooks that we could either take home or leave with Cass. I always left mine. She said she wouldn’t read what we wrote and since I barely wrote anything I didn’t care if she was lying.

As the hands of the clock approached four, most of the chairs filled. Murmured conversation took place around me. A lot of the kids had been coming to the group for several months, so they knew each other pretty well. Some of them even hung out afterward or on the weekends. I couldn’t imagine doing that, forging a bond based on something so awful.

Then the door swung open, and I caught sight of Cass’s long dreadlocks. She wasn’t carrying the workbooks, which probably meant no activity. I slouched down further in my seat, stomach knotting up at the thought of my impending interrogation. But then hope surged. Cass was talking to a girl with short, spiky blond and red-streaked hair, whom I’d never seen before. Maybe she’d focus all of her attention on this new victim and forget about me.

Except the new girl wasn’t actually new. “Her hair’s different, but I’m sure most of you remember our old friend, Katalina,” Cass said as she cut through the circle, heading toward an open seat by the windows. At least the sun would be at Cass’s back, giving me an excuse not to look at her.

I did glance up at not-new Katalina as she passed by, and I realized that she wasn’t new to me either, right as Dario, whose construction worker dad had died in a job-site accident, said, “’Sup, Kat.”

It was the girl singer. The one from the show I’d snuck out to see a month ago. The one whose performance was so good, and she was so friendly to me afterward, that I got caught up in the moment, missed my bus, and because of that, landed here.

Kat’s hair was completely different, and she wasn’t wearing the pearls that had made her stage outfit, but I remembered the combat boots, the nose ring, and her scratchy voice. “Hey, Dario,” she replied, flopping into the seat beside him.

I ripped my eyes away from her as they slapped hands, hoping she wouldn’t remember me. Cass made us go around the room and state our names as she always did. I muttered mine, staring at the silver legs of the chair across from me, so I didn’t have to see the recognition spark on Kat’s face.

What a fucked-up twist of fate. Once Aunt Holly stopped watching me like a hawk, I was hoping to eventually sneak out and see Kat play again. Maybe even become friends with her and the other people that I assumed she knew in the music scene. But now I couldn’t.