Books, poetry, and zines to give this year. 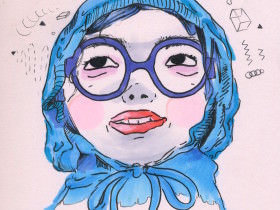 Don’t fret if you haven’t decided on what to give your beloved bookworms this holiday season. We’ve compiled some of our favorite novels, poetry collections, and zines, all of which would make excellent presents. There’s something for everyone: the mystery lover, the budding poet, the romantic, the fan of comics. This reading material is bound (HA HA) to put a smile on the face of the reader who receives it.

The Foxglove Killings
Tara Kelly
2015, Entangled Teen
This book begins on a playground, with the discovery of a dead deer’s head, and a foxglove placed in its mouth. Then one of the Cakes—what the locals of Emerald Cove call the rich kids who vacation in their coastal Oregon town—disappears and turns up murdered, with a foxglove in her mouth, too. 17-year-old Nova’s best friend Alex is a suspect. Even though Alex has been acting weird lately, Nova refuses to believe he’s capable of murder. The only one who sides with her is her longtime enemy Jenika. This isn’t just a suspenseful page-turner set against a gorgeous and creepy Pacific Northwest backdrop: It’s a story populated with nuanced, challenging characters that deals realistically with class differences. The Veronica Mars and Twin Peaks fans in your life will love it, and if you come from a family of mystery readers like mine, it’s a good gift for just about everyone. ($14, Entangled Teen)

Salt Is for Curing
Sonya Vatomsky
2015, Sator Press
Salt Is for Curing is a book of poems that fill you up. They acknowledge hollow and aching places. They make you hungry—hungry for self-reclamation, for survival. They serve up fairytales—Little Red Riding Hood, Baba Yaga—in a way that feels so personal, so empowering. (“And if you come across a wolf, you go by/And if you come upon an oracle, you go by,” reads A girl’s guide to adventuring.) They are a chant, a challenge, an incantation. (“Loves me/And then what/Loves me not/And then what,” Mouth-off (II) repeats for more than two pages.) When I finished this book, I felt like I’d tapped into some deep inner magic—like this wasn’t just a chapbook, it was a spellbook. It’s the perfect gift for new friends that you want in your coven. Read it in the winter, make magic come spring. ($15, Sator Press)

Shadowshaper
Daniel José Older
2015, Arthur A. Levine Books
I heard of this book in passing, and when Amandla Stenberg name-dropped it in her interview with NYLON, I had to check it out. Without giving too much away, the book is about Sierra Santiago. She’s a young artist in Brooklyn, and her summer gets turned upside down after the murals in her Brooklyn community start to fade and weep. She then learns of shadowshaping, and subsequently realizes the murals contain the spirits of her ancestors. What really struck me about this book was that the protagonist is not only a teenage Afro-Latina, but the author doesn’t make her some throwaway character. Her culture is central to her story, and for once a girl is the hero. Also, her crew of friends are a reflection of the people within my own community. The great care Older takes in making sure the representation is thorough and doesn’t ring hollow is to be applauded. It’s a step in the right direction, as YA fiction is actively seeking to be more inclusive, as it should be. There’s so much to unravel and enjoy—be it the supernatural storyline, the relatable characters, and the underlying commentary on gentrification and cultural appropriation. ($13, Amazon)

An Ember in the Ashes
Sabaa Tahir
2015, Razorbill
If you’re picking up something for a reader who tends to devour rather than meditate on a book, this magical fantasy novel (the first in a series) is my tip. In the Empire, children are taken away from their families to train as Masks, who brutally subdue and rule the downtrodden Scholar people. Laia, an orphaned Scholar girl, vows to find and free her brother from their tyranny. When she agrees to spy on the trainees for a group of rebels who also oppose the Empire, she meets Elias, a Mask who is beginning to question his cruel duties. Their missions entwine across their differences as they work against oppression. For those who are pro-good and anti-evil (haha, trick question), lay your paws on this addictive tale. ($20, Penguin Random House)

Dryland
Sara Jaffe
2015, Tin House
End-of-year holidays are perfect for settling down with a dreamy read. This coming-of-age novel by Sara Jaffe (who used to play guitar for Erase Errata) is perfect for you or a bookworm you know, with its gentle tendrils of feeling about love and growing up.

Teenager Julie Winter’s older brother, Jordan, is a swimming superstar who almost made the Olympics. When Alexis—yearbook editor and also a swimmer—starts becoming friendly, asking Julie to join the swim team, Julie basks in the warmth of her notice and develops feelings for her that she can’t name. Everything about this book, from Julie’s tentative recognition of her sexuality (and the internal chaos that follows) to the beautiful rendering of swimming pools and their damp surroundings, seems real. That’s because everything in the novel feels important but not important at the same time, which is one of the great mysteries of experience I haven’t been able to solve yet. ($15, IndieBound)

First Year Healthy
Michael DeForge
2015, Drawn & Quarterly
Toronto cartoonist Michael DeForge tells a story of illness and escape in this beautiful, allusive book, filled with inviting visual details. Pastel yellows and pinks drive the palette in this strange and sweet little hardback. It feels like a kids’ book that holds dark secrets, and keeps them just out of view. ($16, Drawn & Quarterly)

My Anxiety Is My Lover
Joyce Hatton
2015, Self-published
Philly artist Joyce Hatton looks at her relationship with anxiety in this zine-y comic, or comic-y zine. She slyly personifies an abstract feeling into an almost tangible presence. Through open visual layouts and hand-lettering, Joyce explores anxiety in response to issues around sexuality, race, addiction, and abuse. While it’s a difficult read, it helped me feel less isolated in my own struggles with anxiety. ($2, Big Cartel)

The God of Small Things
Arundhati Roy
1997, Random House
The God of Small Things is not written in chronological order. It doesn’t have just one protagonist. It doesn’t have just one story line. It hops back and forth, traveling in time and space, from person to person, describing the life of a broken family living in South India in the 1960s, a time that was ridden with the caste system and Communism. The novel weaves together the perspectives of children and adults, nature and God, morals and organized religion. It’s written so lyrically that the prose feels like poetry, with its vivid descriptions of the landscapes and sights and smells. The story follows twins Rahel and Esthappen and the many losses they face in their lives, including their father, cousin, and mother. And while death is at the core of the tale, the book is at times quite uplifting and even comical, showing us that not everything is all good or all bad, all happy or all sad. ($10, Amazon)

Other People’s Comfort Keeps Me Up at Night
Morgan Parker
2015, Switchback Books
Ever so-often, a critic will proclaim poetry dead. Morgan Parker’s poems are here to let you know that poetry is very much alive. Her poems hit you right in the chest—in the best way possible. These poems are hilarious, sad, fun, and profound. Parker touches on lost loves, mental illness, the absurdity of reality television, and more in this book. I was in a dark place the first time I read this book. I took comfort in poems that spoke so realistically about pain and happiness, and didn’t take themselves seriously. You won’t find these poems in English class (but you should). ($16, Switchback Books)

The Turner House
Angela Flournoy
2015, Houghton Mifflin Harcourt
The Turner House is one of the most beautiful books I’ve ever had the pleasure of reading. It is a magnificently written story of family, triumph, and loss. The story of the Turners, their house on Yarrow Street, and the rise and fall of Detroit will pull at your heart strings. I found myself laughing and crying at various times while reading this novel. With its themes of family, coming of age, loss, and love, this book is an ideal read to devour during winter break. The Turner House is Flournoy’s first book and has been nominated for a dizzying array of awards. She is a burgeoning literary star, and I can’t wait to read more of her work. ($23, Powell’s Books)♦