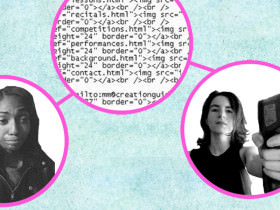 Tech Trek: Make Your Own App

The first night of this church retreat, I was about to run into the woods and go paleo until Sunday afternoon, when the buses were going back down the mountain. I was, simply, depressed and cynical. I had been stationed on the Jesus train tracks waiting for Him to hit me like a Metrolink, but no such luck. Apparently, the Holy Savior Express had become a bit tired after plowing over everyone else, and decided that I could stand to wait. Sigh.

Hoping that the previous night’s lack of spiritual activity would cause some stir within me tonight, I threw myself into mass, then adoration. Throughout adoration, an hour long period of straight-up worship and meditation, I was witness to His train running through the weak, human-constructed walls within my church peers. The line for confession multiplied and I was suddenly embarrassed not to have eye juice washing the second-day forest grime from my face. At some points I wondered if I was the devil. I mean, why else would the HSE have swiftly dodged me on the road to its next stop?

When we assembled into small groups after the ordeal, several of my friends were just bawling. What was up with them that caused this reaction? There were things on my mind, but nothing poking at me. WHY COULDN’T I HAVE POKING PROBLEMS, TOO? I soon thought about when I did have a need to run into confession, be prayed over, or be held in someone’s warm arms despite the cold that surrounded everything else…I did, at one time, have terribly pointy problems—I just didn’t have any of these people here to help me.

Screw what our leader was talking about (probably calling some inanimate object “the enemy” again), I was on fire. Looking at the stage-altar, Why did you make me alone during those times? Why was I forced to go through those hell-simulators by myself? I knew what the other people here would say, “God was with you! Didn’t you know that?” But I didn’t. He wasn’t. I had to crawl out of the dark on my own hands and knees. And now I’m watching these kids enjoy fully-fledged rescue missions.

My hands became clouded in warmth. Perhaps provoked by what I was beginning to believe, I heard Him “speak” to me, at last, “I was there with you.” I knew it was Him, because it was only in that time that I genuinely believed what I had been telling myself that over and again. The resentment lifted; my eyes pricked with tears; my arms were warm. ♦