Be the host who imagines the most. 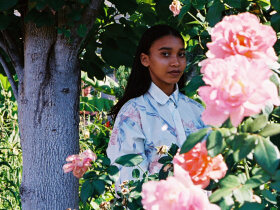 The pill is small and inconspicuous on the stark white of the round table, illuminated by a bright overhead light.

“Totally awesome, right?” the Scientist remarks to their Colleague. “Years of work—endless all-nighters and months of careful calculations—and now this.”

The Colleague squints at the decidedly unremarkable brown capsule. “It just looks like any normal drug you’d find anywhere. I thought you wanted to make it ‘identifiable.'”

The Scientist turns. “My assistant thought it might scare people off if they had to take a volcanic orange pill, so now it’s kinda plain—though it’s still just as remarkable in function, if not in form, as always. I get so excited whenever I look at it. Like, look at it! It’s so sweet!”

Their Colleague gives a wry smile. “This is a prototype?”

“Yeah,” says the Scientist, “but it’s fully functional. It hasn’t been through all the tests and regulations the Organization puts all the drugs through, but it works exactly as it should. Care for a demonstration?”

Their Colleague grins. “After you,” they concede, gesturing with an extended hand.

The Scientist nods and scoops up the pill with one hand, popping it into their mouth in one fluid motion. Poised to swallow, they makes one last comment to their Colleague: “Prepare yourself. This is, for lack of a better phrase, really, really cool.”

They gulp once. Their Colleague waits with bated breath, and for a few seconds nothing happens. The air is as still and undisturbed as the sea on a windless day.

Suddenly, a strange thing begins to happen. The Scientist disappears, bit by bit, as if the atmosphere itself is absorbing their body back into the ether. They seem to disintegrate: their fingers, their feet, their hands, their ankles, their arms, their calves—all of it seems to gradually drift away into nothingness. It should be alarming, but it’s not—the Scientist is so calm, so serene and peaceful, that their Colleague is rendered speechless. The whole ritual feels irreverent and surreal, and the Colleague watches in silence.

The process is quick: after a minute or so, there is no visible indication that the Scientist is or ever was present in the laboratory. The Colleague is wary. What’s going on here?

Something brushes against the back of their coat. A warm breath coasts across their neck. They find their wrist immobilized by two invisible grasping forces. They stare into the space in front of them and ruefully shake their head. “You got me.”

“Didn’t I?! I told you! I told you! You looked like an idiot, by the way, standing there with that stupid look on your face when I started to turn. Twelve PhDs and I’ve beat you to it! A way to be really invisible! Just like we always wanted when we were kids, remember?” the Scientist’s disembodied voice echoes around the room.

The Colleague sighs and smiles, smiles and sighs. “Yeah, yeah, save your victory lap for after it’s cleared for public consumption. And I hope you’ve figured out a way to make yourself…visible again.”

A long pause hangs in the air.

“C’mon, are you kidding me? Didn’t you think of that when you were testing it?”

The Scientist fiddles with the Colleague’s fingers. “Would you be mad if I said I didn’t really test it yet? I mean, I did a lot of theoretical calculations, but…”

The Scientist watches their Colleague’s face for the characteristic signs they always show when they’re exasperated with them: The twitching eyebrow and the pursed lips. Then, as always, a wave of calm comes over them and their face relaxes. The Scientist gives an impish smile which cannot be seen, but is felt by the Colleague.

The Colleague chuckles. “All these years later and I’m still cleaning up after you. You’re lucky I’ve been working on a reversal.”

“But nobody was supposed to have access to my ingredients store…?”

“You’re the one who gave it to me, dummy. When you were first starting, you said, and I quote: ‘Here’s where I keep all my notes and stuff. I’m probably gonna forget something important, so if I do, you can help get me out of whatever problem I’ve gotten myself into. I’m giving you full access—mostly ’cause I need to, and also because I’m screwed without my eternal partner-in-metaphorical-crime. Yeah?'”

The Scientist seems to cock their head to one side. “Oh, yeah. Well, never mind. The important thing is to get me back to normal. Although I kinda like being invisible. I’ve finally got a foolproof way to literally always win hide and seek. I will be the actual master of hide and seek. Certified.”

The Colleague rolls their eyes and slaps the Scientist good-naturedly on their back, guiding them into the adjacent lab.