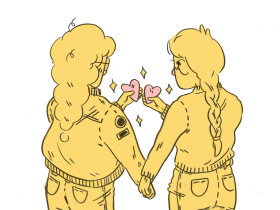 How to Be in a Romantic Relationship 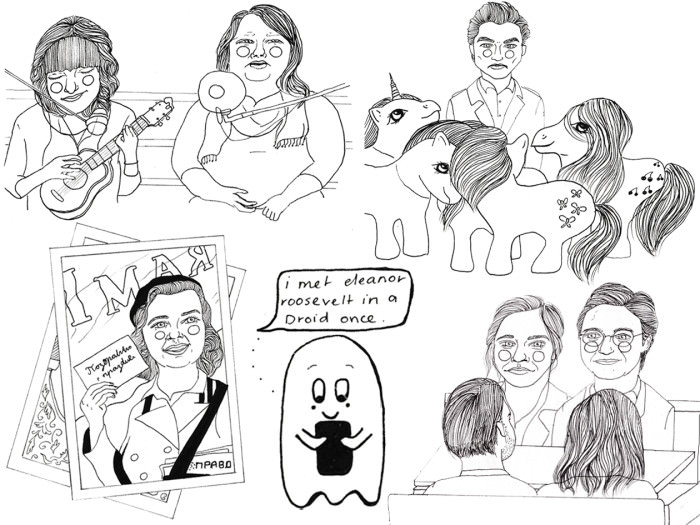 Rainbow Rowell is the author of many excellent books, such as this month’s Carry On. We are big fans of all of her writing, including her work on the internet. For this installment of The Deep Web, we asked Rainbow to tell us about some of her favorite, maybe lesser-known parts of Cyber Space.

When Rookie invited me to write about the Deep Web, I tried to think about what that meant for me…Which online corners do I go back to again and again? Where can you find me on the internet at three in the morning when I can’t sleep? This list of five sites is at least part of the answer.

1. The Secret Life of Dolls

Cleolinda Jones writes about TV and movies and life, and I first found her through her hilarious Twilight recaps. She also really likes dolls and movie tie-in dolls. (We have this in common. When I worked at Toys “R” Us in college, I compulsively bought celebrity dolls; I had the casts of 90210 and Blossom.) So at some point, Cleolinda started writing adventures for her dolls. Her Lord of the Rings dolls are the main cast of characters, but then she gets a Bella action figure and two differently sized Edwards. It’s so hard to explain. There’re My Little Pony ponies and sheep and, if I remember right, scrapbooking. I asked Cleolinda on Twitter if it would be OK for me to talk about the the Secret Life, and she said yes, but that she regretted that it had all ended on a cliffhanger. Then she hinted at further adventures, and I got very excited.

2. The Pure and Simple Truth

After my book Fangirl came out, people started asking me what my favorite piece of fanfiction is. I usually avoided the question, because for some reason, fanfiction feels more private than other reading. Maybe because your taste in fanfiction reveals what you really, really want to read when you’re feeling most self-indulgent. But…this is it. This is my favorite. It’s Harry Potter fanfiction by an author who goes by Lettered. She’s a gorgeous writer. And this fic has everything I want in a story—talking, talking, friendship, more talking, detailed descriptions of clothing, broken people picking up the pieces together. I l-o-v-e it.

(I linked to The Pure and Simple Truth via Archive of Our Own, which is the best place to read and share fanfiction, I think. It’s a nonprofit, organized and created by fans, with the ongoing goal of protecting fan culture.)

When I was kid, Americans were very preoccupied with the threat of a nuclear war with the Soviet Union. Many people saw the U.S.S.R. as a mysterious, oppressive place, where there was little joy or color—and definitely no whimsy. Which is, I think, why I love this Tumblr. First of all, I’m amazed at the abundance of postcards. Postcards weren’t as much of a thing anymore in the United States by the second half of the 20th century. Like, maybe you’d send one on vacation…but Soviet countries had postcards for holidays, and illustrated story postcards, and recipe postcards, and a whole genre of cute-kid photo postcards: cute kids on swings, cute kids dressed in overalls, cute kids on the phone. So much cuteness! So much whimsy! So not what we assumed was happening behind the Iron Curtain.

My apologies to every song that wasn’t recorded in the stairwell at Peterborough Collegiate and Vocational School, because it. sounds. the. best. This stairwell should be like Abbey Road Studios. A whole season of MTV Unplugged should be filmed there. Also, Kate and Janelle have magical voices that get exponentially more magical when they sing together. Every syllable in this cover breaks me. I love their sweaters. I love their laughter at the beginning. I love watching Janelle’s hands. (I hope this isn’t creepy.)

5. Text Messages From a Ghost

Mallory Ortberg is an author and one of the women who run The Toast. Now she is my friend, but in 2012, I had no idea who she was when I saw this piece on the Hairpin and flipped. I remember posting it everywhere and saying, “This is the best thing ever written on The Internet.” It makes me laugh so much—in a sort of sad way. I still can’t really explain why, and I’ve read it so many times. Here’s a highlight:

“i really like dolly parton
i think she would make a really great ghost
not that i want her to die!!” ♦