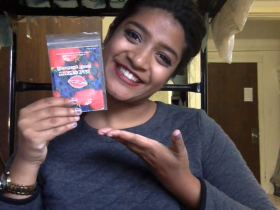 Upasna Asks: How Do You Go on a Date? 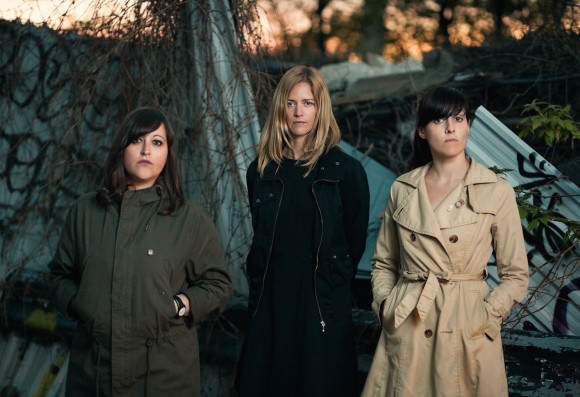 The Beverleys pile riffs upon riffs on a single track. Joanna Lund, Steph Lund, and Susan Burke take “negative” feelings–like anxiety, for example–and use them to fuel their music, which is a barrage of lo-fi sounds, tied together neatly by clean and precise melodies.

Today, Rookie premieres the Beverleys’ “Visions,” a music video that stars some of the band’s friends from the music community in Toronto, where they are based:

I sat down with the band in Toronto last week to talk about the frantic process behind shooting “Visions,” feeling paranoid in the woods, and why they proudly call themselves “junk punk.”

MELODY LAU: How was it to shoot this music video?

SUSAN BURKE: It was so hard. We had to film it in double time because it was in slow motion. It was literal chaos. Just one after another, jumping in front of the camera as fast as you can. It was done in one take…

Wait, it was done in one take?

SUSAN BURKE: Yes! Everybody was hiding behind the camera the whole time, in this one tiny spot. We were in a real time crunch, because some people had to leave for work or whatever. Nobody was being paid to be there. Some people didn’t show up.

Still, quite a few of your friends showed, and they’re all from other great Toronto bands–Dilly Dally, HSY, Bad Channels, the Dirty Nil, Sam Coffey and the Iron Lungs, and Hot Kid. Do you feel like you’ve developed a community in the city?

JOANNA LUND: You start off knowing a few people here and there, and through them, you meet more people and realize how close the community is.

SUSAN BURKE: The people who I’d say are my close friends now are through music.

In a statement you gave about your upcoming album, Brutal, Susan references time spent in the countryside and feeling paranoid, and my immediate thought was, This is the premise of a scary movie.

SUSAN BURKE: That’s interesting that you say that because horror is the underlying feeling we had. We spent a summer together mainly out by the Niagara area, and the lyrics for “Visions” definitely came from there. There was a lot of anxiety at the time, personally, and being out in the woods really spoke to that. I kept seeing dark imagery like crows, wolves, and bad forces coming out.

What is it about anxiety that inspired you to write?

SUSAN BURKE: An energy. This sense of anxiety stirs a lot of energy in you, like, “Ugh, just do something!”

I’m glad it works in your favor! Anxiety can either force a person to do something or completely shut them down.

SUSAN BURKE: I think there were moments of both, definitely.

You coined the term “junk punk” to describe the music you make. Have you ever had second thoughts about putting that label on yourselves?

SUSAN BURKE: No, because it’s truly how we feel. There was one summer when we really resonated with the idea of feeling rock bottom, and feeling comfortable and happy with it. It literally came from one of us going, “I feel like junk.” I’m glad I’m junk! ♦