Tech Trek: What’s Up With Drones?

Some basic facts about the popular aircrafts. 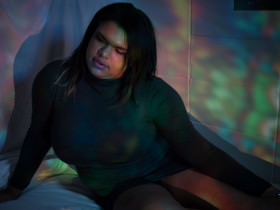 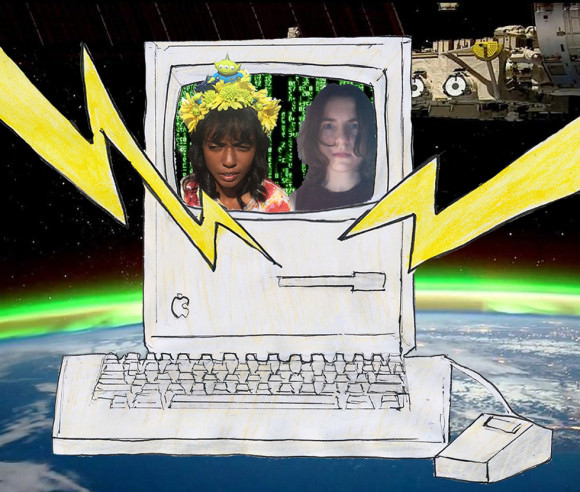 Collages and illustration by Maggie Thrash.

Greetings! It’s Maggie and Amber, beaming down for another installment of Tech Trek. We’ll be taking a close look at drones, and our Movie of the Month is 2003’s The Core, starring Delroy Lindo—an actor Amber once saw in person at a crêpe shop.

Explore: The Buzz on Civilian Drones 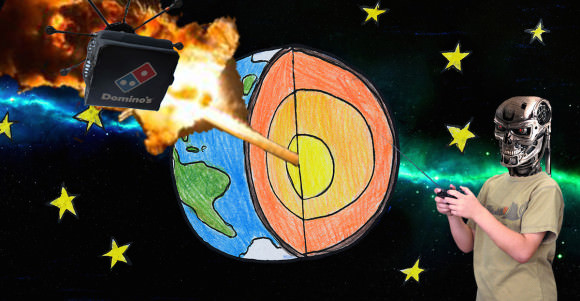 In the past couple years, drones specifically developed for use by civilians have increased in popularity. They’ve also increased my desire to have a Buffalo chicken pizza delivered via flying robot. Not only are major companies like Google experimenting with civilian drones, so are people like Martha Stewart and the dude who lives down the street from me. But it wasn’t too long ago that drones were almost exclusively linked to warfare: These unmanned aircrafts have conceptual origins dating back to the period just after World War I, and most recently have been used extensively and controversially by the U.S. military.

With drones’ now-undeniable presence in society, it makes sense to nail down some basic facts about these aircrafts, and so we present: The Tech Trek Primer on Civilian Drones.

What exactly is a drone?

Simply put, drones are aircrafts that fly without an onboard pilot. “Drone” is actually just a nickname—they’re officially known as unmanned aerial vehicles (UAV) or unmanned aircraft systems (UAS). Typically, a person outside the aircraft, usually somewhere on the ground, pilots a drone by using a remote control. Sometimes drones have the capability to fly autonomously, meaning that their flight paths can be directed by onboard computers or GPS systems, without human involvement. This description may make drones sound like highfalutin’ model airplanes, but the drone’s autonomous flight capabilities make it distinct. (Though, you can be certain that once the holiday season rolls around, people are going to be trying to pawn off some bootleg model aircrafts as drones. Beware.)

Why are they called drones?

Popular wisdom holds that “drone” refers to the droning sound that the engines of the first remote controlled military aircrafts made. But wait—before you use that juicy little historical nugget to astound your family over dinner tonight, there is another nickname origin story. According to Steven Zaloga, author of Unmanned Aerial Vehicles: Robotic Air Warfare 1917–2007, the nickname dates back to 1935, when a U.S. admiral was invited to watch a demonstration of the British Navy’s DH 82B Queen Bee remote controlled aircraft. When the admiral came back to the States to develop similar technology, he named the resulting aircrafts “drones,” as a tribute to the Queen Bee. Get it? Because male honeybees are called drones?!

Do all drones look the same?

There is a lot of diversity in the form and size of today’s drones, especially now that the aircrafts are increasingly being purchased by ordinary people who most likely don’t have the space to house massive, military-style aircrafts. Some of the drones available to consumers are small enough to be held in your hand, while military drones can be as large as a standard jet airplane—the U.S. Navy is set to unleash a drone with a 130-foot wingspan in 2017.

Structurally, some resemble a typical fix-winged airplane (the Predator, one of the most commonly used military drones, is a good example of this) and others like the quadcopter (a popular type of civilian drone with four propellers attached to the ends of its four arms) bear a closer resemblance to a helicopter.

How are civilian drones being used today?

The Federal Aviation Administration (FAA) has strict rules about how civilians can use drones, and they vary depending on whether they’re being flown for commercial or non-commercial purposes. Naturally, this technology is occasionally used in some horrifying ways. (To see the darker side of civilian drones, one need only take a quick peek at YouTube, where people have posted videos of handguns firing from atop small drones.) But it’s heartening to know that drones have a lot of really constructive and positive applications, too. Unmanned aircrafts are being flown into the center of hurricanes to collect data that will allow meteorologists to track a storm’s intensity; they’re used to survey natural disaster areas and were deployed by the American Red Cross after the devastating earthquake in Nepal earlier this year; and farmers are flying them to monitor crops and collect data that will help detect disease and allow for more efficient water and pesticide use.

Drones are also helping make art and music. The artist KATSU, for example, developed a graffiti drone and makes abstract works with a spray can attached to a quadcopter:

And in 2014, John Cale, founding member of the Velvet Underground, staged a performance at the Barbican in London of a so-called “drone orchestra,” in which music was projected from speakers on drones flying above the audience:

Drones equipped with cameras are producing breathtaking aerial photography and providing filmmakers, both amateur and professional, with the sort of epic, sweeping shots that traditionally would have taken cranes to capture. In short, drones are making it a lot easier for all of us to finally complete shot-for-shot remakes of all 682 minutes of the Lord of the Rings trilogy.

Why are people concerned about the spread of civilian drone use?

Drones can carry cameras, and some have sophisticated sensors that collect data about the areas that they fly over. For many people, this sort of technology seems like a threat to privacy. While we probably don’t have to worry about our neighbors flying their drones into our backyards and spying on us—using drones for private surveillance by civilians is illegal—the way that law enforcement agencies, specifically in the U.S., are able to use drones is troubling, including to civil liberties groups like the ACLU.

There’s also the question of safety. The drones used by the military are controlled by experienced pilots, whereas many civilian drones are controlled by anyone who has enough money to buy one. Although the controls for consumer drones aren’t too difficult to figure out, a mistake or a malfunction or just bad judgment could send the aircraft hurtling toward, I don’t know, a baby’s precious face, for instance.

The silver lining here, though, is that these concerns honestly have a lot to do with the technology developing faster than government agencies have been able regulate it. And eventually—well, hopefully—legislation that allows for safe and fair use of drones will start to pop up everywhere.

What can we expect from the civilian drones of the future?

Many of the innovators pushing this technology forward are thinking idealistically and altruistically—there are plans to use drones to track down poachers who are hunting endangered species and Facebook is developing solar-powered wi-fi drones that could potentially provide internet to people who live in remote locations throughout the world.

The drone development that you hear a lot about in the media is parcel delivery drones. As part of their proposed Amazon Prime Air program, Amazon hopes to eventually roll out a fleet of “small unmanned aircraft systems’” that would purportedly travel at speeds of over 50 miles per hour and deliver packages in 30 minutes or less. Unfortunately for Amazon, the FAA, which oversees civilian aviation in the U.S., banned “out of sight” use for unmanned drones. They’re sticklers for safety and want to make sure that any unmanned commercial aircrafts, delivery or otherwise, meet their airworthiness standards.

The FAA has issued an experimental certificate to a slew of companies, including Amazon, allowing them to test out their drones. I, of course, have my own brilliant ideas about the types of drones that I’d like to see in the future and am considering applying for one of these experimental certificates. Somewhere near the top of my “drones that need to exist” list is one that French braids hair.

The developers of civilian drones are really just starting to explore what these aircrafts have to offer, and right now that’s exciting. Drones are no longer just symbols of war and violence: They can enrich our lives, too. —Amber

I love the movie The Core because every single character in it is a huge nerd. It’s about a bunch of scientists who travel to the center of the Earth to stop the end of the world. I think the best sci-fi movies are the ones where the characters are actual scientists trying to do their jobs, as opposed to “Regular Joes” who get wrapped up in some cataclysm and end up improbably saving humanity. While The Core isn’t perfect­, it is at least grounded in some scientific realities, and the main characters are scientists/researchers (one is a badass female astronaut played by Hilary Swank). It passes the Bechdel test within the first 15 minutes; it has fun, Sharknado-ish CGI; Stanley Tucci gives an awesome performance as a pompous sell-out scientist; plus it has the cheesiest, most classic depiction of a hacker in any movie ever:

So let’s examine The Core, and what it gets right and what it gets wrong. The premise of the movie is that Earth’s inner core, which spins faster than its surface, stops spinning for a mysterious reason, resulting in world-wide disaster. According to the movie, if the Earth’s core stopped spinning, this is what would happen: birds would start violently crashing into everything, the Aurora Borealis would appear at random, and space shuttles’ navigational systems would go haywire. Is this all scientifically accurate? Basically, maybe? You can explore this further at The Core: Good Science and Bad Science in the Movie. Earth’s spinning core creates an electromagnetic field that protects us from the sun’s radiation. Birds’ flight patterns would go berserk–their brains interact with the electromagnetic field for navigation. The Auroras would no longer be tied to Earth’s magnetic poles. But this is all nothing compared to what would happen once the electromagnetic field totally breaks down—an event that would result in the planet being pretty much cooked to oblivion by cosmic rays:

Amethysts—and people!—would certainly melt at the center of the Earth, where temperatures are as hot as the sun’s surface. Also probably untrue but referenced in the movie: Earth’s center is filled with pockets of “empty space.” Basically, this is an idea that’s been floating around since the 1700s—that the Earth actually has outer space inside it. This is called the Hollow Earth Hypothesis, and has been largely debunked. Cool idea, but again…No.

The Core is a great example of a movie that is rooted in scientific truths, but then goes off the deep end. But I don’t think this is a bad thing! Movies can be smart and respectful of science while still exploring wild and exciting “what ifs.” —Maggie

’Til next time, Tech Trekkies! ♦

If you have any tech-related queries, send ’em our way! We’re here to help. Please write to us at [email protected] with your first name and last initial, age, city/state, and question.