The Story of a Green-Eyed Stepsister

When my mom remarried, I gained the perfect sibling. 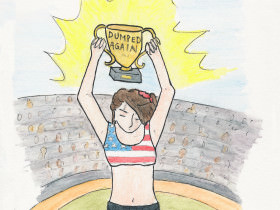 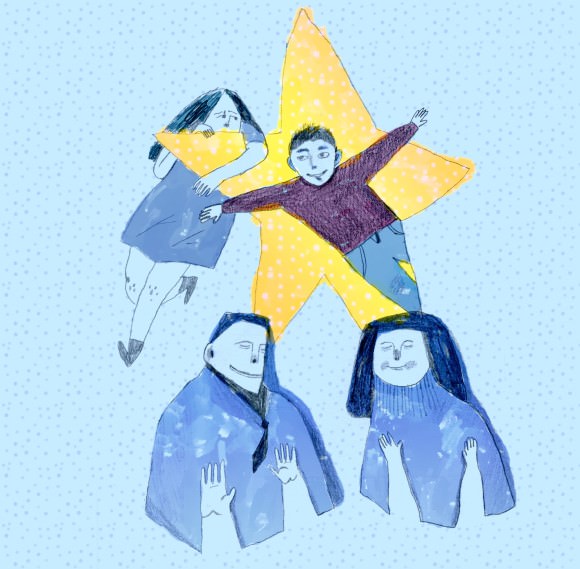 When my mother first met my stepdad, I was there, too, and so was my stepbrother, Jacob. We were in Singapore; my mother and I had flown from Chennai to visit family, and Jacob and my stepfather were in from Memphis to visit theirs. My mother met my stepdad through family, who decided it would be good to introduce them. Since they were both divorced with kids, they wanted Jacob and I to meet, too. So, yes, we sat there, sort of third wheeling in the background of our parents’ sushi date, my mother by my side, and Jacob’s father by his. We ate quietly, trying to be considerate of our parents’ efforts to get to know each other. The only time Jacob really said anything was to point out that his shrimp tempura had eyes.

As the dinner wore on and I listened in on the adults’ conversation, I began to do the math. They met through family—my mother’s first cousin was my stepdad’s sister’s neighbor. They were actually kind of on a date, to which they had brought their kids. This was serious. It occurred to me there could soon be a huge shift in my life.

A couple of my high school friends had siblings. One complained about how messy her older sister was, another that she sometimes heard her brother having sex upstairs. Having a sibling was always a distant, inconceivable event, a cliché I would never have to deal with. As an only child for the first 14 years of my life I’d received my mom’s attention, credit, and praise. But when she said, “I’m getting remarried, you’re going to have a stepbrother now!” my only-child advantage didn’t apply. I had no choice. I couldn’t simply say, “No thanks, Mom! I’m good!” I so badly wanted my mother to be happy that for the first couple of months after she got married, pleasing her outweighed my underlying discomfort and worry.

18 months after that sushi date, I moved back to the United States and into my stepfather’s house. My stepdad is a humorous guy whose features favor Jack Nicholson (pre-murderous rage) in The Shining. I was glad that he and my mother could live harmoniously, despite an 11-year age difference and the obstacles that come with it, and it felt important to impress my mother with how well we got along. Jacob split his time between his parents’ homes—he spent half of each week with us and alternate weekends, too—so whenever he came back I had to remind myself all over again that I had a stepbrother. And, perhaps because he wasn’t there all the time, perhaps because he was 11 and I was 14 (neither of us young enough to just accept this as the new status quo), there was this unspoken awkwardness, this weirdness, between us.

When Jacob enrolled in private school, the competitiveness that had been inadvertently but inevitably forming in me, lit up. I hated the school I was in; besides being one of the worst-performing schools in the district, I wasn’t doing too well socially, and was one of only three Indian students in the entire school. Before the move, my life had revolved around my education—I loved to study and learn—but my new school wasn’t satisfying my thirst for knowledge. I burned with envy every time I thought about the quality of education my stepbrother was getting, the kind of discourse he could partake in, the kind of help he could get when applying to college, the kind of parties he would get invited to. My competitiveness slowly morphed into an acrid bitterness.

Whenever Jacob came to stay, my stepdad made a spectacle of it, which made sense—he wanted things to be special for his son. My mother and stepfather would cook good meals for him and make sure he was comfortable in his new environment. As the designated “older sister,” settling Jacob into our new situation was also partly my responsibility. I was supposed to be the role model, the mature one. So, besides my mother’s occasional consoling, I really didn’t have anyone to hover over me and make sure I was OK. My bitterness increased; as an only child, I’d enjoyed my mother’s full love and attention. I was starting to realize that being lavished with attention was also the domain of younger siblings.

Jacob, on the other hand, didn’t seem frustrated or annoyed by this new situation or by my presence. He was so difficult to read. Sometimes he was very quiet, just sitting in the living room doing his homework. At other times he was restless, wrestling with his dog Phoebe or going outside to kick his soccer ball around by himself. Unlike me, he seemed content, and I was afraid to ask him how he felt about our parents being married and about having me in his life, in case his answer was, “I don’t mind.” I was alone in my competitiveness, while he remained effortless in everything he did.

I knew Jacob’s life wasn’t perfect, but the good grace with which he met his troubles infuriated me. In his first few months at private school, he had difficulty making friends. Unlike most of his peers, he doesn’t come from a very well-off family, which means working doubly hard to get into college and to receive scholarships to pay for it. He never talked about his hard work, bragged about how well he was doing in school, or complained about not making friends (although, yes, the occasional self-praising joke wasn’t uncommon. But they were just that: jokes). He was so extremely admirable and so extremely mature that it pissed me off, even as I admired his laid-back demeanor, and how subtle and humble he could be.

Besides charming good looks and intelligence, Jacob is that perfect mix of “good at sports,” “good at school,” and “good at LIFE.” As a soccer player for a private club, he gets to travel. Although he works hard and is in a constant school-practice-homework-school-match-homework-school cycle, he also gets invited to tons of parties. His life was—and still is—full and lively and exciting. My life felt pale in comparison. I absorbed myself in schoolwork just to pass the time. I played tennis, but for the school team (yes, the school I hated) and I wasn’t close friends with my teammates. I was invited to plenty of parties, but I rarely attended because of my social anxiety. I was living one life while he living a better, more fulfilling one, right alongside me. Since he was so mature, I increasingly looked to him as an example of how I should live. I’d forget that he was two years younger than me, remind myself of the age difference—although small—and then feel strange to be so admiring of him.

His eighth grade year—our second year as siblings—Jacob and I began actually talking. He asked me to help him study for Latin class and I agreed to. Our sibling bond was further strengthened by his dog, Phoebe: I started wrestling with her, too. Jacob and I watch movies together on my laptop, we crack stupid jokes in the car, we study together, albeit in two different rooms. We watched the series finale of Dexter together. Jacob doesn’t talk much when he’s around—besides likely feeling exhausted from all the things he does, he’s just a very mellow human being. We have silent conversations. And much of what I know about Jacob I’ve learned by observing him; it’s the same vice versa.

During my sophomore year of high school, I faced harsh comments about my weight looks via social media. One weekend, I was pacing around, telling myself aloud, “Do not eat the Blue Bell ice cream in the freezer.” Jacob overheard me, sat up on the couch, and said, “Ughhhhhh, Upasna, you’re perfect, OK? Just eat the ice cream.” I knew Jacob was a good kid, but I didn’t expect him to be so thoughtful, especially since I was still being the jealous stepsister.

It wasn’t, and still isn’t, uncommon for me to feel low or awkward in Jacob’s presence when he’s doing all the things I want to do (being amazing at athletics, getting a superb education) and being all that I want to be (popular, good-looking). Sometimes I simply feel boring, and he is simply cool. Here’s the thing, though: He isn’t mean to me. He has never once put me down or called me a name or gotten me into trouble. (Have I done these things to him? Yes. Many times.) It feels OK that Jacob isn’t just my stupid little stepbrother, that he is a mentor and someone I truly look up to. I eat his leftover ice cream, and he never gives me a hard time about it.

I’m in college now and Jacob is two years away from graduating high school. My competitiveness and bitterness is fading, and now when he tells me about yet another achievement, I understand how it feels to be someone’s sibling. I think it’s called being proud, and it feels sort of like this. ♦