Life Is Surprising: An Interview With Lauren Graham

Our surrogate TV mom reminisces about the Gilmore Girls days. 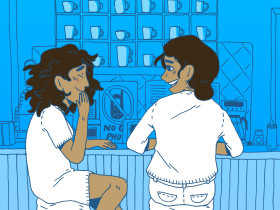 Lorelai got her business degree, opened an inn, and broke down notions of what a character like that could be on TV. She also challenged the idea that going from high school, to college, to a job, to a family is the only or right path. Did you ever feel those same pressures when you were growing up?

I did! I had a very free-spirited mother, who was incredibly artistic, super talented, beautiful, and magnetic. She was an artist for a time, and a singer for a time. She was in the fashion world. But, if you looked at us at the same age, at the same time, I would’ve put money on her fulfilling her dreams of being an artist. She [was] disappointed [when] not making it. She was a star in her own way. I think one of the reasons I was so driven—and I didn’t even know this consciously, I don’t think—was because I saw this person who had so much talent, and I knew I’d need to work twice as hard to get even half of her natural gifts.

I was pretty driven academically. When I left high school I was 17, so I was younger than most people when I went to acting school. Everyone I knew was in these academic programs, while I was rehearsing for scene study. It didn’t feel like school—it felt like something else. I transferred and became an English major at Barnard College, and there I was like, “Wait, I don’t have enough time to do plays and musicals!” I followed a bit of a snaky path and couldn’t decide: Do I need to have an academic background? Or, do I follow what I’d rather be doing? I [ended up] somewhere in between.

There’s no wrong choice, and in the choosing, you’re gonna find something out. In just trying to follow what you want down one road, you’re not taking the other road. You can get there so many different ways. I didn’t have any “in” into show business. I didn’t have any connection. Show business (or any business) shouldn’t feel like a bad relationship. Like, how long will you stay in a relationship with a guy who doesn’t call you? Show business can feel that way sometimes. You have to get through it, weather these times of difficulty and rejection, but who wants to be in a club that doesn’t want them? My friends have said, “I’m gonna be a yoga teacher. I’m gonna do something else. I just want to be happy,” so there’s that, too. Sometimes the path you take teaches you that you’d rather do something else.

What did you take away from the experience of playing Lorelai?

There are two things I think about: One is playing the character. The other, is what it was for me as a job and the professional impact it had on me and my life.

Playing the character would remind me that, this is someone who comes at things with positivity and a sense of fun. And that was a joy to play. You took for granted that this was a capable, smart businessperson who, like you said, could have relationships or not, who has a kid…It wasn’t like, “Look at this woman who works and is a single mother! We’re gonna point it out all the time!” The show took that for granted. That’s just who she was, and that’s how I feel, too. I don’t walk around like, “I’m a woman! Look at all the things I do!” I like to do what I like to do. [Gilmore Girls] was very modern in its own way.

In terms of what that job was for me, I would never have known that we would be sitting here talking about it…People will tell you your entire life, “Be in the moment.” And, that perhaps is a futile pursuit. You can’t possibly see the future. You can’t know [what] the moment you’re in will mean down the line, so you just have to be there as much as you can. Life is surprising.

I could not have predicted how the world would change. When I started Gilmore Girls, I did not have a camera on my phone. We got an AOL pager as a big promo in the show’s second year, and we were like, “Whoo!” We could never have known what changes the world would go through. Isn’t life wonderful and mysterious? That’s really what I think of when I think of the show. At the time, Kelly Bishop, [who played Emily,] who has so much insight, said to me, “I think this is gonna be one of those shows that lasts and lasts.” ♦

[Editor’s note: Three days after this interview, TV Line reported that Netflix will be developing an epilogue to Gilmore Girls, with its creator Amy Sherman-Palladino. A few days after that big news, we learned that Lauren and Mae Whitman (Lauren’s TV daughter Amber on Parenthood), will be adapting the novel The Royal We into a film that they’ll also produce.]