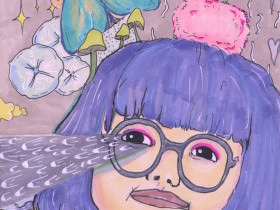 Do you remember one of the first things you discovered that felt like your own? First books or movies?

I don’t think I discovered an album that felt like my own until my mid-20s.

I didn’t grow up listening to music. It was around a lot, but I was writing. Whatever that impulse is when you’re a teenager and you wanna get home and put on your headphones and lie on your floor, I had that feeling, but I would just go and play harp. At that point, I wasn’t singing, so it was just instrumental stuff. I think the first record I got into was Fleetwood Mac’s Rumours. I knew bands, but I didn’t get excited about anything as my own until I was older.

Did you have to rethink your idea of a singer-songwriter and musician in order to feel that you could be one?

It wasn’t even rethinking my idea of a singer-songwriter—when I started writing songs, I was still thinking of myself as a composer. I was in school to be a composer, in the formal sense. I was trying to be, like, a Philip Glass or something. I also kept changing my major, constantly. I was writing a lot. I was in a poetry class and my poems were very bad. They kept weirdly falling into these meters that were replicating, or at least approaching, sonnet form more than anything else—Shakespearean and Petrarchan sonnet forms. And I didn’t understand why, ’cause that’s not the type of writing I like the most. I realized, later down the line, I had this huge longing for music, and as a subtext for the words, the words needed counterpoint, and they needed not just meter, but rhythm. Sonnets are incredible, all the rules that they have are so exciting to me. They’re stand-ins for a musical line, in a way.

That was all jostling around in my head, and I remember taking this Survey of American Music class. I grew up playing folk music practically, physically playing folk music at folk music camps with my little community, just with other players. The only folk music I ever heard was popular ’60s folk, but that Survey of American Music class was the first time I ever heard any of the Lomax Brothers’ archives. There’s this whole collection of amazing field recordings. In many ways they kickstarted the modern—1950s on[ward]—national love affair with folk music before it got Joan Baez’d, although Joan Baez is wonderful, she has this classically beautiful voice. But someone like Texas Gladden, who was one of these Lomax archive—not performers, she was just a grandmother who had an amazing voice that they recorded. But all of these people who they recorded had voices that were so beautiful and moving.

This is a very long answer to your question, but I think because I came from a classical background, I had it ingrained in me the classical concept that you need to be good at something, technically speaking, before you can do it. I didn’t ever have an outsider thing where you pick up an instrument and figure it out and play it and maybe that has validity to it because it’s instinctive. For me, you play an instrument for 20 years and then you start recording. I had never sung before, and one reason is that I did not think I had a classically beautiful voice so I didn’t consider that to be a tool at my disposal. In my early 20s, I realized that it was a tool at my disposal, musically speaking, and it was that missing piece.

A reader named Vitor asked, “How did you choose to cover ‘Same Old Man’ on this album?”

It was actually a song that I covered years ago, when I was touring. I think the first time I performed this song was at an orchestral show at Brooklyn Academy of Music. I’ve always loved that song, and specifically the Karen Dalton version. The harp version has always been really exciting to me.

As I was writing this record, one thing that kept coming up formally or stylistically was recontextualizing quotes—fragments of a thing—either newspaper articles or quotes from novels or quotes from poetry. Some of them are not so much quotes but descriptions of paintings or works of art. The governing principle behind these quotes is this recontextualization. A collaging thing happens, even within one line or two quotes, [which] might be mashed together in a way that creates a new meaning.

Not only does “Same Old Man” narratively connect to the songs on this record—the city and leaving the city and those sorts of things—but it also takes on a slightly different meaning in terms of the sequencing. The sequencing of the record is important to me, and so the song comes after each song, and the song that’s before it slightly alters the meaning. In a way, it was this larger scale version of the same idea—of making a bit of a collage out of quotations.

Nieve said, “You’ve spoken before about how women’s voices are held to a standard of prettiness, and how you were able to overcome that in part by listening to women who differed from the popular norm and sang in a more idiosyncratic style. I think that’s such an encouraging thing for young female songwriters to learn, and to have artists like yourself to look up to is so important. Who would have been most influential on you, and which artists do you currently admire in this regard?”

Well, definitely, Texas Gladden, who I mentioned, was sort of my epiphany person. Hearing her and recognizing in myself that I thought she was, to me, beautiful, and I say that in the non-gender-coded way—beautiful, empirically beautiful. I think me recognizing that that was the case despite the fact that she didn’t have a conventionally feminine color to her voice, was a very key moment for me. Obviously, Billie Holiday had a gorgeous, gorgeous voice and had some real pop success with it as well, but there were certain aspects of her voice that I also related to in a way, and Karen Dalton as well, pretty early on.

I started to think of it as waveforms. The violin is not an uglier sound than the flute, it’s just a jagged waveform instead of a smooth waveform. There are certain things that, musically, I prefer over others: I like music that is in tune, I prefer when singers are in tune, I prefer when I’m in tune. In terms of people today, as I said, I’m a little out of the loop, but I have noticed I’m really excited by the way that Grimes frames herself, and seems utterly disinterested in her own beauty, which is really exciting to me. Sometimes it’s useful for an idea, and then other times it’s not useful for an idea, and she seems unaffected either way. I like her music as well, and I like what she says.

Sophie, age 18: “Were you ever afraid of growing up and no longer feeling things as strongly as you did as a teenager?”

I don’t think I was ever scared of not feeling things as strongly as a teenager when I grew up. I was a little blind to my own privilege as I was growing up, I was not totally aware [that] the things that I had, like delicious food and a house in the woods, were things that cost money. There was a point in college when I realized in horror that the thing that I wanted to do in my life, which was some version of music, probably meant that I couldn’t afford to have what I had growing up, and that was really scary to me. Not that I would stop feeling things, that I would stop feeling inspired by things. I’ve always been so inspired by aesthetic things, I’m very affected by my environment, which I guess everyone is, but the particular environment that I prefer is one that I took for granted growing up. I realized later in life that I probably wasn’t going to be able to create that environment for myself without an income, and I didn’t know where that income was going to come from. So I had a weird, angsty couple years around that fear. But, feelings: I think we come into the world with them and leave the world with them. ♦