How to Say No

And other things TLC, Destiny’s Child, En Vogue, and Erykah Badu taught me. 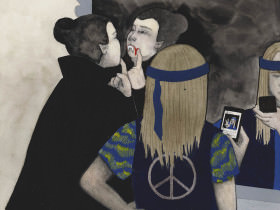 We Only Come Out at Night 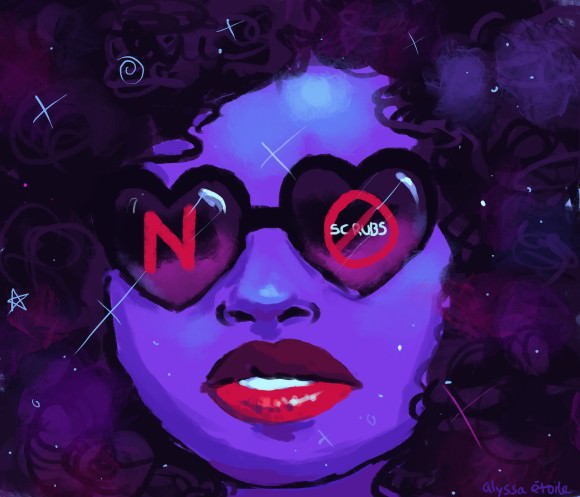 I attended school in a predominantly white neighborhood, which skewed how I saw myself. Yes, I knew I was black, but at school the examples I saw—of friendship, romance, and just normal, everyday life–were fronted by white faces. I saw power in the way my confident, blonde-haired classmates asserted themselves in social situations; I, on the other hand, would either quietly avoid everyone or embarrassingly overreact (read: blow up emotionally) when forced to socialize.

Groups like TLC and Destiny’s Child gave me women to look up to, besides the girls in my class. Seeing women with my skin tone asserting their knowledge of the world through music started me on my way to accepting who I am, claiming the power to decide what I want in life and who I choose to let into that life.

The lyrics that stand out to me are those in which the singers reject social expectations surrounding their behavior. These songs reject the idea that women—especially women of color—should be OK with catcallers, remain loyal under dire circumstances, or put up with deceit. Not for TLC, Destiny’s Child, En Vogue, nor Erykah Badu! These women understood self-respect as the right to demand and receive what they truly wanted for their own lives.

Listening to their songs over and over on the radio, or shouting along to them at parties with friends, I gathered lessons about my own self-worth, the joy of being surrounded by black women, and the idea that feminism is something deeply rooted within me, not just a label. Here are some of those lessons.

One of the most significant features of TLC’s 1999 hit “No Scrubs” is the number of times they say “no.” “No” they don’t need to give out their personal information if they don’t want to, “no” they don’t want to even waste time on any relationship they know they’ll never have love for, and “no,” they don’t need to offer explanations for their feelings or emotions. In these lines, TLC protect their self-worth, reject sexual attention (“trying to holler at me”), and show that they know what they do and do not want.

What really clicked for me listening to this no-tirade was that I could choose to live life according to my own rules and values. I didn’t have to be defined by or integrated with the girls and guys at school, just because they were my only breathing examples of socialization. I could think for myself, find my own idols, and in turn, regulate who and what came in and out of my life. I understood that I deserve to have high standards when choosing a significant other, and those standards apply to other parts of my life, too. Like who I want in my friend group, what kind of education I want, and what kind of environments I want to be part of. TLC taught me that saying “no” is just another way of saying “yes” to yourself.

En Vogue’s “My Lovin’” takes ’60s-style doo-wop harmonies, similar to those sung by the Supremes and the Ronettes, and uses them to very different effect. While those earlier girl groups sang about longing for a crush to like them in return, En Vogue twist the sentiment, so that seeking approval becomes outright rejection. As they coo “never gonna get it” in bangin’ harmony, they snatch the glory commonly attached to masculine sexual conquest for themselves. The “it” in this lyric is loaded with meaning: “It” refers to sex and love, but also to the way feminine bodies are objectified—turned from people into things. By saying he’s “never gonna get it,” En Vogue refuse being thingified, and insist on defining themselves.

This song opened me to thinking about claiming myself: my mind, my body, my “it.” I can claim my sexual “it,” and use it only if I feel comfortable and with someone of my choosing. In my everyday life—especially around my white classmates, friends, and coworkers—I often felt erased. This song reminds me that I have the upper hand in grounding my own existence. I define who I am, who I want to be, and how I impact the world, regardless of the pressures to conform that come from outside.

Destiny’s Child’s early hit “Say My Name” is a testament to confronting relationship issues. The person to whom this song is addressed is “actin’ shady” and “runnin’ game.” In an effort to uncover the truth, Destiny’s Child challenge him to “say baby I love you,” to test whether he can look them in the eye and genuinely say he’s been loyal. This demand, from Beyoncé, Kelly, Michelle, and Farrah, calls out the player or Don Juan figure, who thinks they can deceive people without consequence. Destiny’s Child make sure to tell ’em that they’ve been caught.

What I love about this song is not just it’s catchiness, but that it’s a constant reminder to stay in check with my relationships. I’m not saying I never trust a friend or significant other, but I do try to enter situations with clear eyes. That means being honest with myself, rather that fleecing my own damn self! Whether it’s a problem at school, an issue with a coworker, or a crush, “Say My Name” is a lesson in confronting issues head on. Because if it’s a problem, why let it affect my emotional state longer than it has to? Talk it out instead!

Cut Out the Bad Stuff

I think you better call Tyrone / Tell him come on help you get your shit.

Erykah Badu’s “Call Tyrone” is the ultimate anthem to getting rid of a user. In the song, Badu talks about an unnamed “partner” who treats her like a “cheap thrill,” and who is always hanging out with his friends, only coming around when he wants “some ass” or for her to “pay [his] way, and [his] homeboys’ way, and sometimes [his] cousins’ way!” When Badu sings “I think you better call Tyrone” she is telling the person who is using her, that he needs to rely on someone else for a change. She’s sick of this codependent relationship; it’s toxic and an unnecessary financial and emotional strain. Badu is not here for it.

I don’t think I’ll be telling anyone to “call Tyrone” anytime soon, but what I took from Badu’s song is that I should commit to cutting the bad stuff out of my life. If toxicity is lurking within my friendships, or if I’m in an environment that makes me uncomfortable, I try to just get out. Cutting something or someone out of your life is never easy, but once the murky stuff is removed, it’s easier to live life the way you want to live it.

These artists and their songs helped kickstart my understanding my worth as a black girl, teaching me that it was not just possible but necessary for me to stand up for myself. When life feels like a battlefield, I still look to these women and their ability to speak up, take action, and give themselves the respect they deserve. They encourage me to keep myself in mind, always, and to keep doing me. ♦