The director, producer, and screenwriter lists the Gothic romances that influenced him and his new film, Crimson Peak. 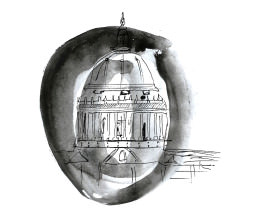 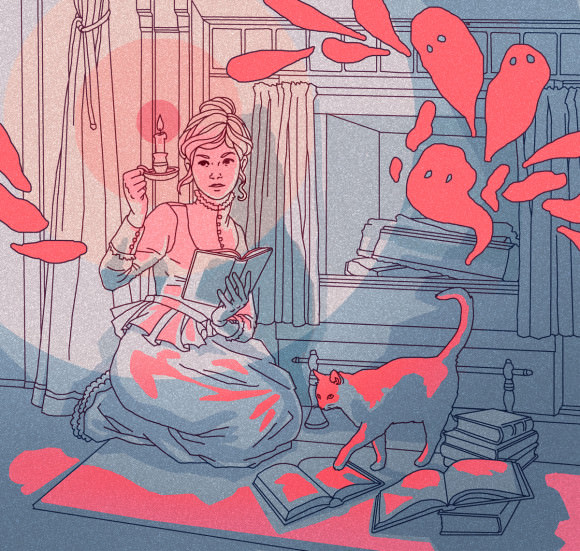 Do you ever wonder what goes on in the wondrous mind of director, producer, and screenwriter Guillermo del Toro? Yes? Same. Well, to chime with the recent release of his creepy, goth thriller Crimson Peak, Guillermo has curated a syllabus of the Gothic and Gothic romance novels, short stories, and engravings that influenced the making of the film. He sent us these recommendations with the following words: “I hope you enjoy some of these as fall or winter reads by the fireplace.” Before you post up beside an actual fire, here’s what Guillermo del Toro has to say about these Gothic essentials.

Uncle Silas by J. Sheridan Le Fanu
This book defines the link between fairy tales and gothic romance. Uncle Silas is a convoluted, highly perverse mystery-thriller about innocence in danger, written by the master of ghost stories, J. Sheridan Le Fanu. It’s a dense but rewarding read, and it was crucial to Crimson Peak.

Jane Eyre by Charlotte Brontë
Along with Uncle Silas, Jane Eyre is my favorite novel. Jane is a complex hero, and the book’s structure is an exemplary model—to the point that it was imitated by later works such as Rebecca by Daphne du Maurier, Dragonwyck by Anya Seton, and even, in an oblique way, by Frances Hodgson Burnett’s The Secret Garden.

I read Jane Eyre at the same age as I read Frankenstein, and I fell in love with both books. My young crushes were on Mary Shelley and the entire Brontë sisterhood. The Brontës and their brother, Branwell (their own private Heathcliff), had such brief, tragic lives. Their literary output can be read rapidly and with gusto! In contrast to her sister Emily’s ferocity, or her sister Anne’s real-world feminism, Charlotte seeks balance between emotion and self-control, and between genre and denunciation.

As a character, Jane is stainless-steel strong when facing the world. Her inflexible dignity and self-knowledge allow her to survive the brutality of boarding school and the indifference of the world. In this novel, love goes through measured, calculated pain in order to be deserved. The book contains one of my favorite scenes in the history of literature, and one that I quote almost verbatim in Crimson Peak: The “cord of communion” speech from Rochester to Jane.

The Mysteries of Udolpho by Ann Radcliffe
This novel is Ann Radcliffe’s Gothic romance magnum opus (well, along with another novel, The Italian). Radcliffe was a powerhouse. Like a lot of Gothic romances, The Mysteries is set in an “exotic” locale, which intends to make its readership to dream of “dark” passions. This book features in Jane Austen’s Northanger Abbey, which was written in response to the enormous popularity of the Gothic genre.

The Turn of the Screw by Henry James
This story is a sort of deconstruction of Gothic, done beautifully by Henry James. He picks up where the writer Edgar Allan Poe left off—searching for horror, not in dark castles, but in the dark edifices of the mind. The true ghosts are in our minds and haunt us–ambiguous, but terrifying. James once said—and I poorly paraphrase—that in Gothic romance, the ghost represents the past. I used that idea as a springboard for Crimson Peak. James’ clash between American and English culture is also somewhat present in the movie.

Wuthering Heights by Emily Brontë
Emily is my favorite Brontë. Her mysterious but powerful personality shines through Wuthering Heights, her only novel. Marginalized by publishers of the time, female writers resorted to pseudonyms in order to get their work published. This was the case with the Brontë sisters, and of this book, which was originally published under the pseudonym Ellis Bell. (The siblings all came up with pseudonyms that allowed them to keep their initials).

The powerful emotions and contradictions that fuel Catherine, undoubtedly fueled Emily Brontë and her dark, convulsive work. This book is as close to an autobiography of the soul as one gets—other than Frankenstein. The elemental ferocity of the characters seems as much influenced by bookish concerns (notably Sir Walter Scott), as by the fiery heart of its author. Impossible, mad love, essential to Gothic romance—and seemingly impossible to understand for male writers of the era—is enshrined here between Heathcliff and Catherine. Wuthering Heights is tragic, fierce, and unforgettable.

Great Expectations by Charles Dickens
Dickens is one of my favorite writers of all time. His plot structures and characters are precise, vibrant, and effective today as they were in his day. The Gothic romance spirit is alive and well within his work, and that’s especially true of Great Expectations. The sense of place as destiny, the class struggle, the convoluted plotting, and the redemption story are both Dickensian and Gothic. But it is Miss Havisham—her rotting wedding dress, and mummified banquet—who stands tall. Once again, the fairy tale element of the Gothic genre shines through. Dickens was occasionally concerned about the consumption of the body by fire—to the extent that a spontaneous human combustion occurs in his novel Bleak House). Here, the conflagration of Havisham is both horrific and quasi-magical—it’s a phenomenal read.

The Monk by Matthew G. Lewis
This work exemplifies the spirit of the Gothic novel with its intricate plots, coruscating prose, and the faint smell of sulfur. Iconoclastic, anarchic, and a lot of fun if you get into its rhythms and prose! The essential Gothic works include, The Monk, The Castle of Otranto, Vathek, and Melmoth the Wanderer. In The Monk, there is a great horror tale about “The Bloody Nun” that sent shivers down my spine as a kid. The lurid balance between titillation and bloody imagery were important in the making of Crimson Peak.

“Fall of the House of Usher” by Edgar Allan Poe
This short story was crucial to developing Crimson Peak. Gothic is birthed in Horace Walpole’s The Castle of Otranto, a novel which establishes the importance of a decaying edifice as the ideal arena for horror and passion. Poe, however, creates a bridge between the psyche of his characters and the edifice that surrounds them. Every detail and every texture is important. He pointedly imbues the edifice with a malignant, vigilant character. The mansion in this novel is rotting and sinking, much like the souls of the siblings—the last of a decadent lineage. The house encapsulates and represents them. The incestuous undertones, and way horror is internalized are quite revolutionary. Before Poe, haunted castles were an external agent. He cements the bridge between external and internal horrors: The haunted edifice and the haunted mind become one.

Carceri d’invenzione (The Imaginary Prisons) by Giovanni Battista Piranesi
Contemplation of the past is key to the birth of Gothic, and the genre is full of the romantic emotion that surges at the sight of monumental ruins. At its origin, Walpole’s The Castle of Otranto is inspired by the engravings of Giovanni Battista Piranesi’s Carceri. Piranesi was a remarkable artist and his engravings of Italian ruins captured European imaginations. However, this novel creates a series of imaginary prisons and cellars of impossible dimensions and containing fantastic machinery and infinite architecture. They are truly the stuff of nightmares and, over the years, they’ve inspired countless artists—Romantics, Symbolists, Surrealists, and filmmakers. ♦