Brought to you by our obsession with Bring It On. 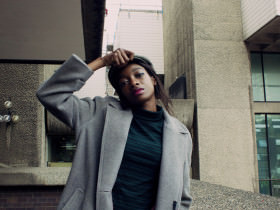 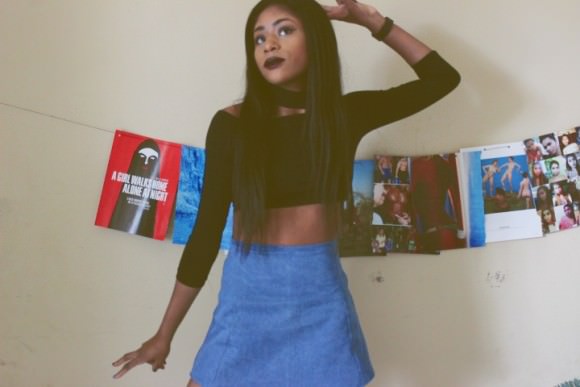 Seriously: Bring it on.

This flared denim skirt DIY is brought to you by my back-to-school vibes and current obsession with Bring It On–style cheerleading uniforms. Sewing with denim can seem intimidating, but it’s totally doable (when in doubt, I draw inspiration from the denim mastery of James Flemons of Phlemuns to guide me). The fun thing about this skirt is that you can make it whatever length you want: like long enough to be in line with your school’s dress code—or not. Let’s get into it! 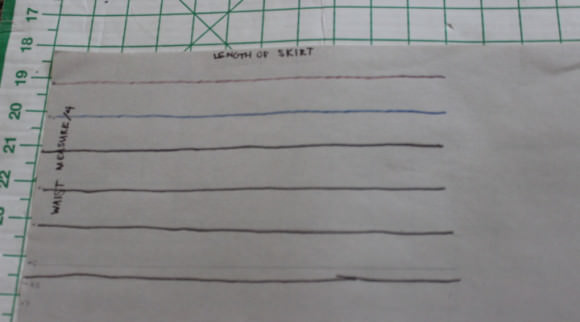 Use the measuring tape to measure your waist, then divide that measurement by four. On a piece of pattern paper, draw a rectangle that is the resulting measurement wide, and as long as you want your skirt to be (I made mine 14 inches long). On one of the short ends of the pattern, write “waist.” Then, use your ruler to make a mark every one-inch along the waist end. From each mark, draw a vertical line down the length of the pattern, like so: 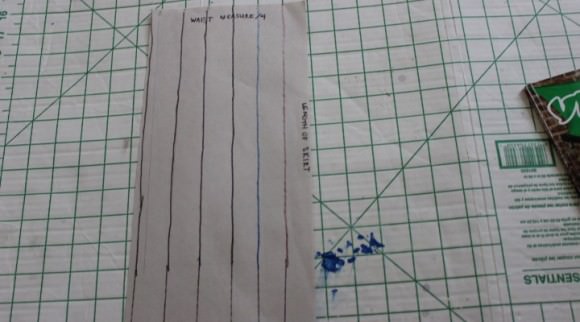 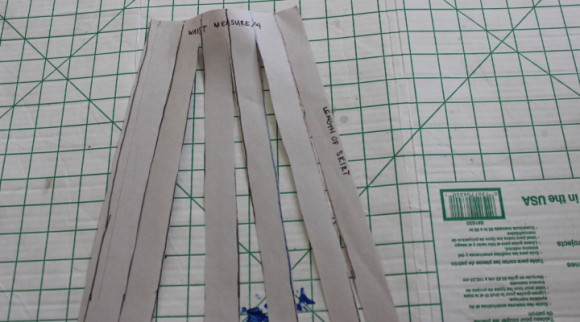 Cut the pattern out around its perimeter. Then cut through the vertical lines, stopping a half-inch below the pattern’s waist end. 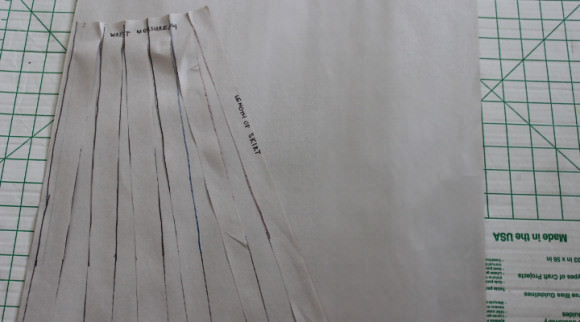 Spread the pattern out. It should look like the start of a skirt! Use tape or a glue stick to secure the pattern to another sheet of paper: 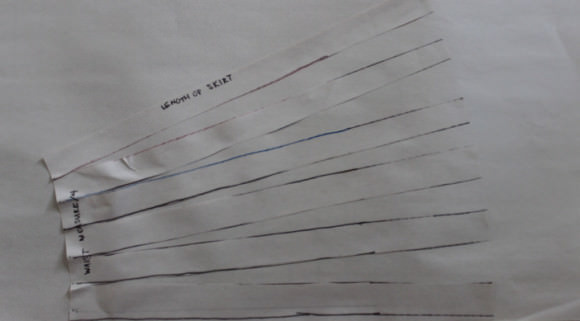 This is already a masterpiece! 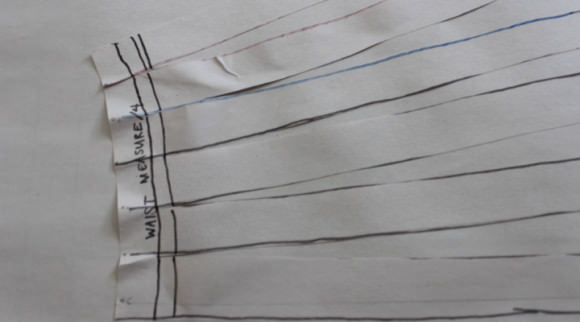 About a half-inch down from the waist, draw a line that follows the curve of the pattern. This will be the skirt’s waistband. 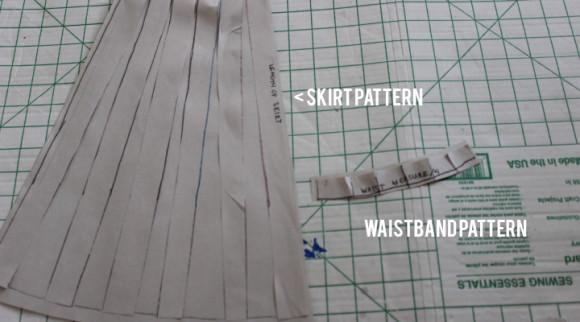 Cut around the skirt pattern’s perimeter again, this time through the second sheet of paper, as well. Then, cut all the way through the waistband line. Now it’s a pattern, too! 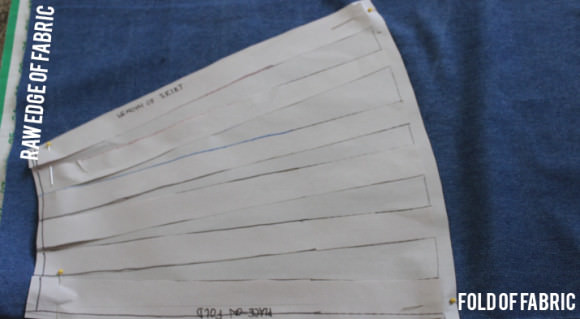 Fold your denim fabric in half and lay it on a flat surface. Place the skirt pattern on the folded edge, then use straight pins to secure it to the fabric. Cut around the pattern on the fold. (This will result in one big piece of cut fabric.) What’s left of your fabric is still technically folded, but you won’t have much of a folded edge left. That’s OK—move your pattern to a place on the fabric away from the folded edge, pin it into place, and cut around the perimeter again. (This will result in two smaller pieces of cut fabric, which we’ll call the “back” pieces. Set these aside until you get to Step Nine.) 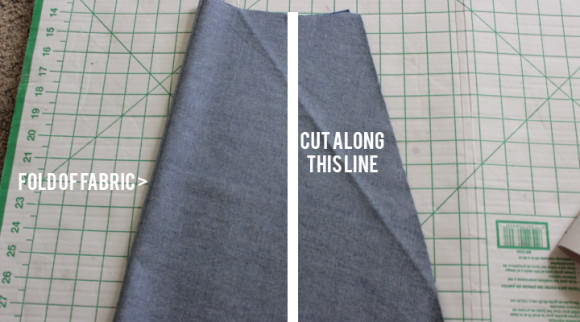 Take the piece of fabric that was cut on the fold, and re-fold it, so that the fabric’s “wrong” side is facing out. On the side opposite the fold, measure about a third of the way in from the outer edge of the waist. Make a mark, then cut a straight, vertical line through both layers of the folded fabric. When you’re done, you’ll have three pieces that look something like this: 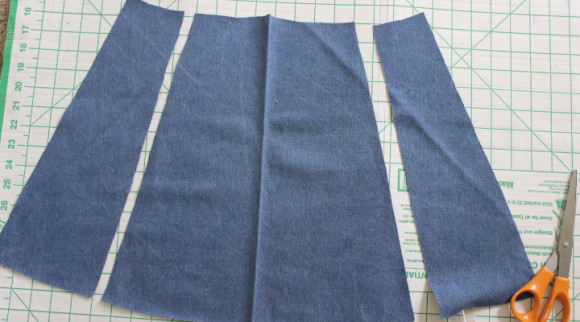 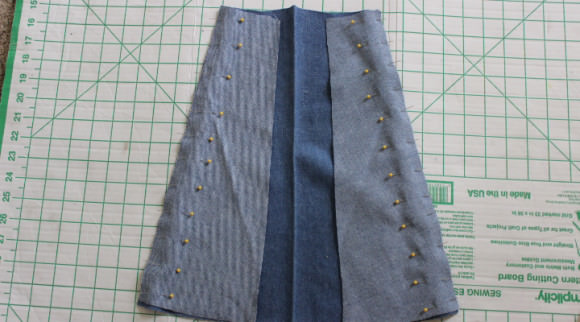 Take the two small pieces that you just cut, and lay them on the third, bigger piece so that the fabric’s “right” sides are touching and the edges line up evenly. Pin the three pieces together like I did in the photo above, then use a needle and thread or sewing machine to sew a straight line through both sides, about a quarter of an inch from the outer edges. This skirt is starting to shape up—look at that, the front part is all done! 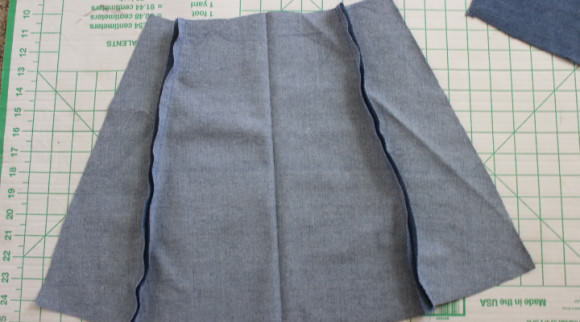 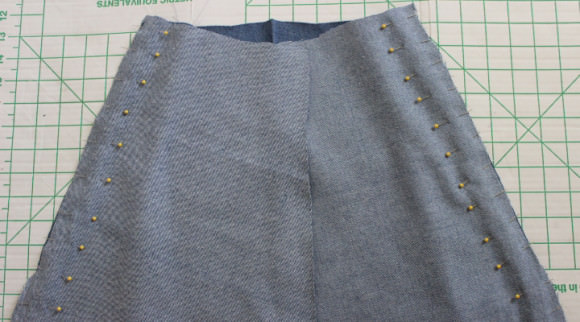 Lay the front part of the skirt on a flat surface, “right” side up. Now, remember those two back pieces from Step Six? Lay them on top of the front part of the skirt, right-sides facing down. Line one piece up with one outer edge of the skirt’s front, then line the other piece up with the opposite edge of the skirt’s front. Pin them into place like I did in the photo above, then use a needle and thread or sewing machine to sew a straight line through both sides, about a quarter of an inch from the outer edges. You should have one big piece that looks kind of like a high school auditorium now! 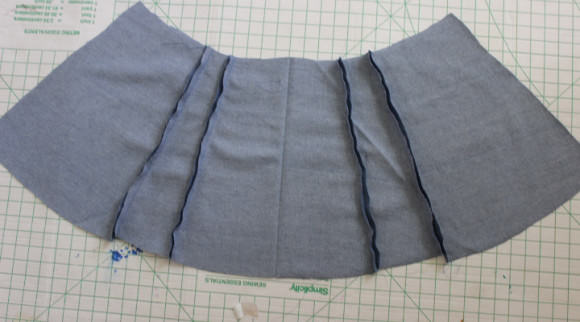 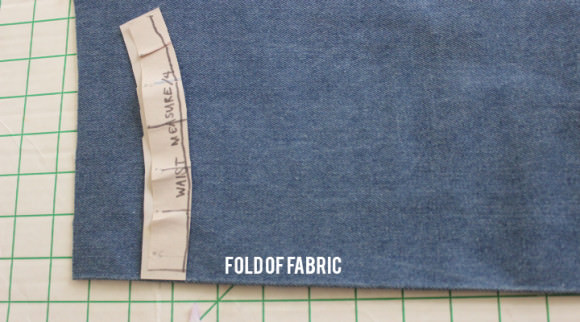 Go back to your denim fabric, and fold it again. Line your waistband pattern up with the folded edge, and cut around its perimeter. Repeat that step two more times, so that you end up with three cut pieces. 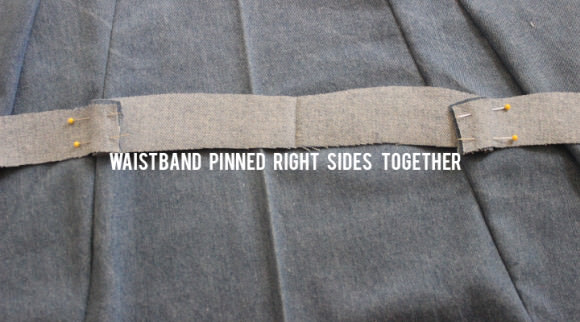 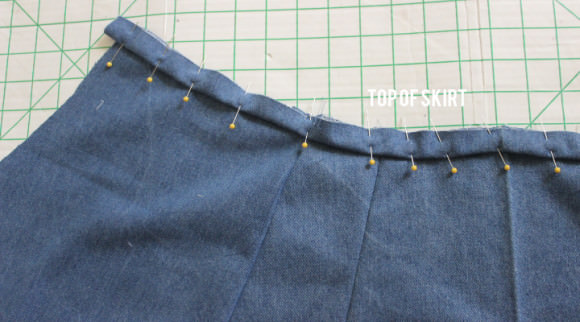 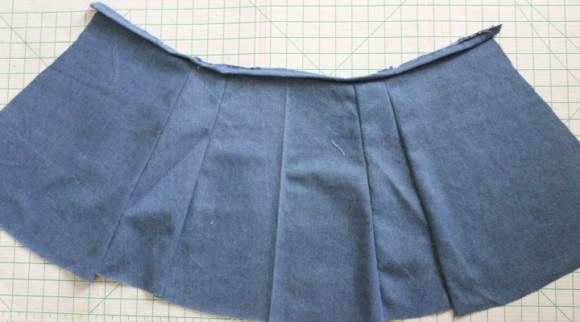 Yay! Warm up an iron, and press any wrinkles out of your almost-finished skirt! 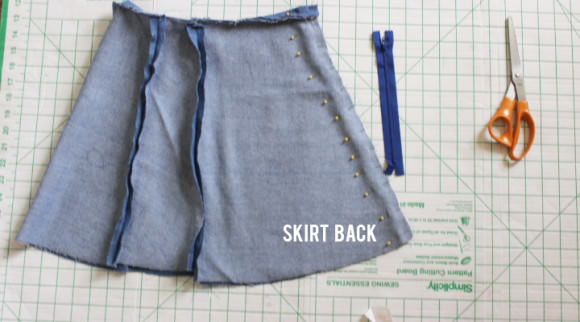 Fold your skirt in half, so that the wrong side of the fabric faces out. Line up the raw edges and pin them together. Along the pins, line the top of the zipper up with the skirt’s waist. With a needle and thread, sew through the pinned part of the skirt that is lining up with the zipper using really, really loose stitches—the loosest stitches you can make. Below the zipper, use a needle and thread or sewing machine to stitch a regular-strength seam through the pinned part, down the length of the skirt. 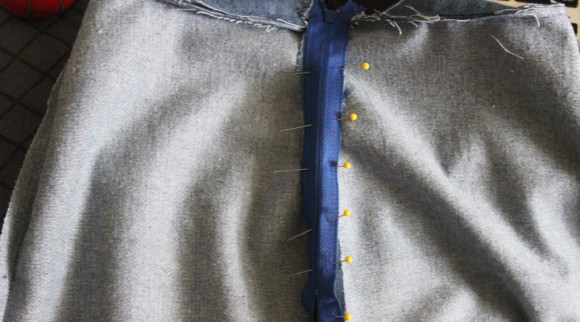 Now, pin your zipper into place, and secure it to the skirt by carefully stitching its outer edges to the seam. 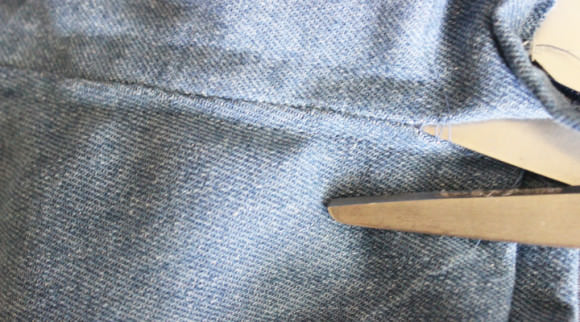 Turn the skirt right-side out, and cut those really, really loose stitches you made in Step Thirteen. Surprise—there’s a zipper under there! 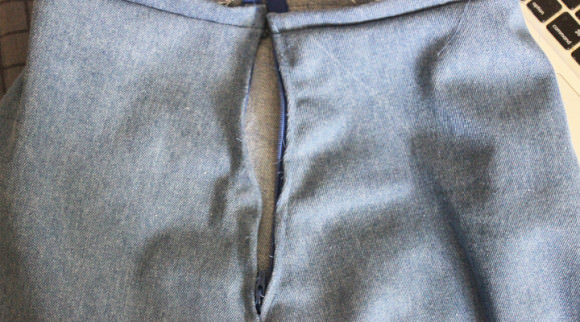 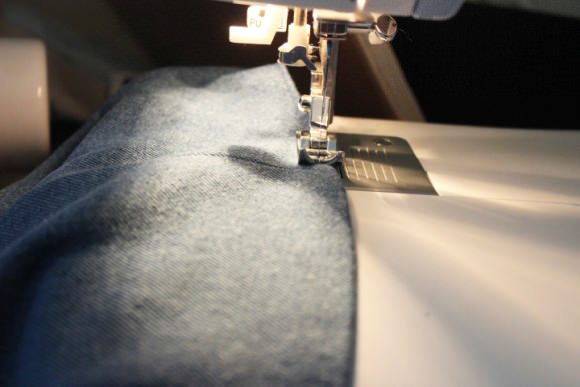 Turn skirt inside out, and fold over the skirt’s bottom edge, so that the raw part is hidden on the skirt’s “wrong” side. Iron it down and pin it all the way around the skirt’s perimeter. Sew a straight line all the way through this edge, about a quarter-inch, to make a hem. 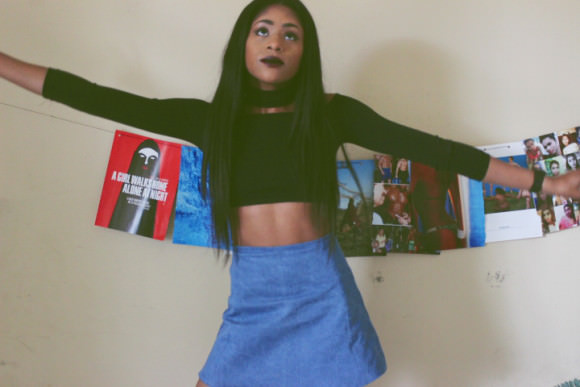 All done! It was hard work, but it totally paid off. ♦