Some seasonal ideas for getting off the internet include building a monster, holding a séance, and y’know, a little time travel. 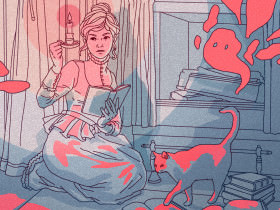 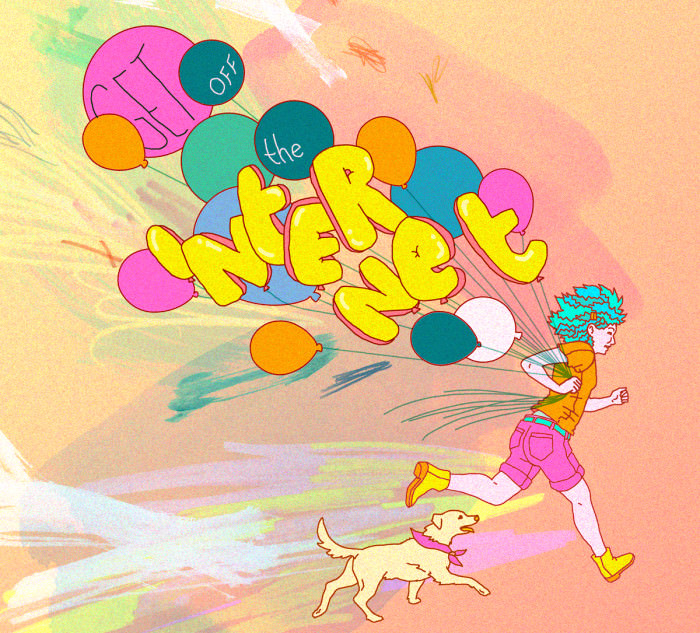 This time of the year is so beautiful to me—the color of the leaves, the mellow weather practically begging me to go out and walk around in it, the goblins—that I don’t have to make too much of an effort to disconnect from all of my devices. I want to be out in the world, I want to celebrate the season, and come October 31, I want to get real spooky with it. If, like me, you’re ready to take a brief sabbatical from the internet, then I’ve got a few ideas for you.

Hold a secret, scary storytelling gathering. OK, so there was once this phenomenal horror TV show on Nickelodeon called Are You Afraid of the Dark? It was about a secret society of Canadian teenagers who’d go deep into the woods late at night, not to drink or dry hump, but to tell each other scary stories. They called themselves the Midnight Society and they were the real deal, OK? There wasn’t anything or anyone cooler than them. Why not take a page from the Midnight Society’s book and have a secret gathering totally devoted to telling scary stories. Everyone invited should craft their own, original, chilling tales beforehand—making sure the stories have all of the requisite twists, turns, and clowns. Then, sit around a bonfire at night or just in a dark room, forebodingly lit by Yankee Candles, and terrify each other.

Create a monster. Remember when Victor Frankenstein created his monster? At first he was super pumped about what he was doing, but then the whole thing went totally off the rails (everyone was immensely unhappy, people started dying, etc.). Vic could’ve saved himself a lot of grief if he’d just built his monster with arts and crafts materials—something that is incredibly fun and always therapeutic for me. Drawing a monster—a traditionally frightening creature is a good outlet for some of my darker, heavier emotions and anxieties, which I end up channeling through my creation. Grab some paper and your favorite drawing implements and create the monster of your dreams. Or rather, the monster of your nightmares (muhahaha). How many eyes will your monster have? Will it drool? Will it be hairy or hella naked? Monsters can look like anything and everything: Let your imagination take over.

Make a Halloween or autumn-themed headband. DIY floral headbands are awesome. They’re easy to make, they’re pretty, and they make your head look all nature-y. Best of all, though, is that when you sit down to put one together, figuring out how the flowers will be arranged is a truly meditative experience. If you are in the northern hemisphere, take advantage of October, by making a headband with fall leaves. Walk around your neighborhood gathering bright, orange and yellow foliage (or just go to a craft store and buy some fake ones if real leaves aren’t an option) and then arrange your bounty onto a headband, and secure them with some floral tape. You can step up your headband game by incorporating Halloween- or autumn-themed decorations. With a hot glue gun (these cost about $3 at craft stores), glue a tiny fake pumpkin, cobwebs, or a toy bat or spider onto the headband. You will look bomb and, because making one of these headbands is such a peaceful, calming activity, you’ll be all serene while you’re wearing it.

Hold a séance. If you’ve ever wanted to contact spirits from the great beyond, Halloween is the time to do it—ghosts become super chatty on October 31, to the point where you practically can’t shut them up. Dim the lights and gather a few friends or family members around a table with an array of spooky candles in the center. Everyone should hold hands and concentrate hard on making contact with the netherworld. You, acting as a spirit medium, can begin the séance with a prayer. Say something like, “If any phantoms be near, reveal thyself here or whisper thine name in my ear (if thou art shy).” You may want to use a spirit board to assist in the séance—everyone placing their hands on the planchette, taking turns asking ghosts questions.

An alternative to this, which I think is just as entertaining (maybe even a little more exciting), is to not actually attempt to contact ghosts, but instead hold a kind of mock séance. The setup is the same, but here, each person takes turns pretending to be possessed by a dead historical figure. No one reveals the name of the person they’re channeling, they merely do the best impression they can—recite well-known quotes, and reveal tidbits about the person’s life (like, if I looked around the room and said, “This wallpaper and I are fighting a duel to the death. Either it goes or I do,” you might gather that I was Oscar Wilde). Everyone else has to use these clues to try and figure out who you’ve all “contacted.”

Travel back in time and right the wrongs of the past. Right about now you’re saying, “Surely, I must need a wifi connection or some kind of USB cord to travel through time, Amber.” Actually, you don’t need NONE OF THAT. You don’t even need to leave your house. In the U.S., daylight saving time ends on Halloween night (well, technically, it ends a 2 AM, November 1). When the clocks “fall back,” we are gifted an extra hour—the ultimate Halloween treat. While many people are content to just fritter that bonus hour away sleeping, I like to recognize it for the magnificent thing that it is.

When daylight savings ends (in most countries that observe DST, this happens on the last Sunday of October), we all essentially become time travelers and are given the chance to “redo” the hour of 1:00 AM–1:59 AM. This time around, be a kinder, more compassionate person! Eat a burrito! Lift some weights and become one hour buffer! Do any or all of the things that I’ve just described in this month’s installment of The Disconnect! But don’t forget to end the hour with the “Time Warp” (it’s just a jump to the left, then a step to the right. With your hands on your hips, you bring your knees in tight. But it’s the pelvic thrust that really drives you insane…). It isn’t very often that we’re given second chances in life, and it’s even less common to be able to time travel, so make the most of this wonderful opportunity. ♦