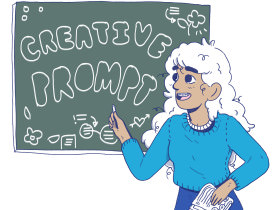 Friendship keeps me grounded. Having a few close friends to experience good times with reminds me that I’m human. But I have trouble relating to a lot of the people at my school. I have a tendency to make fun of myself and my troubles. It runs in the family, my dad doesn’t find anything funny in heavy situations, but my sister, aunts, cousins, grandma, pretty much my entire family, can turn a personal catastrophe into a comedy skit. It keeps us sane, if we couldn’t laugh how would we survive? We’d be forced to wallow in our pain.

Lately, the people I’ve been running into don’t understand that. They don’t laugh, and even get concerned, when I make light of the very real situations I’ve been in. One of the few people at this school around whom I can be myself and always make fun of my problems is Jewel. Not only is she my one African/black American friend here, but it doesn’t hurt that she also does nothing but make fun of herself and horrible situations, too. It’s really refreshing to be around her. I can finally breathe and stop pretending to be something I’m not. Sometimes, I feel like we’re old ladies sitting in rocking chairs when we roast each other and talk.

Just two weeks ago we were sitting in my bed having a regular conversation when she brought up her childhood growing up in Chinatown on the Lower East Side. She went to predominantly Chinese schools as a kid which made her very confused: At times she believed she was Chinese just like the others she lived around and attended class with. Her neutral look widened into a smile as she described trying to “look more Chinese” and having her parents explain to her why they don’t celebrate Chinese holidays. That episode of Black-ish where the son asks his dad if he can have a bar mitzvah because his white Jewish friend was having one immediately appeared in my head and I started giggling with her. As she delved deeper into her younger self’s twisted view our laughter became uncontrollable. Chuckling, she struggled to get out, “It’s n-ahht f-u-nnyy HAHAHAHAHAHAHAHA.” And there we were holding our stomachs and gasping for air in my bed for a good two-and-a-half minutes because Jewel’s life sounded like a sitcom.

It was the happiest I’d been in weeks. It felt surreal, as if we were floating—I felt light. We were on a cloud above all the bad that waits for us below and tries to bring us down. With tears rolling down our faces, I couldn’t tell if we were crying because we were laughing so hard or because we’d become aware of how often we use humor to mask our pain. Maybe it was 90 percent because we were laughing too hard and 10 percent because our lives are ridiculous. Either way it was a high. I hoped for more moments like that one. ♦