Find Out About Yourself: An Interview With Ibeyi

“We don’t really understand each other. Music is our way to communicate.” 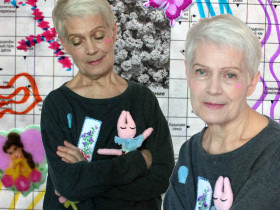 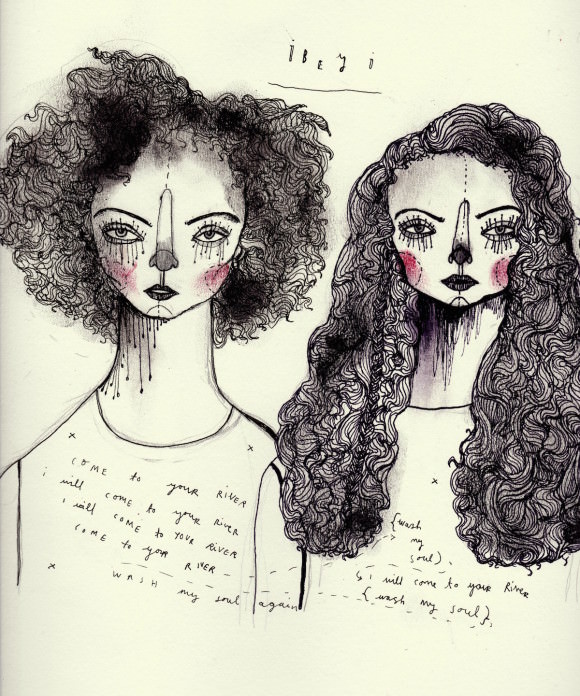 The musical duo Ibeyi is made up of fraternal twin sisters Lisa-Kaindé Diaz and Naomi Diaz. Their voices float serenely over electronic music, R&B, and jazz, while their lyrics are deeply rooted in the sisters’ experiences with loss and grief: Their self-titled debut album is laced with odes to their late father, Cuban percussionist Miguel “Angá” Diaz, and their late sister, Yanira Diaz.

The name “ibeyi” translates as “twin” in the West African language of Yoruba, but as Lisa-Kaindé and Naomi tell their story, they often reference the notion that Ibeyi is, in part, a project that helps them understand each other as individuals. I met up with Lisa-Kaindé and Naomi in a crowded coffee shop on a rainy day in New York. The twins talked about their talents, influences, and what they really think about each another.

CHANEL PARKS: Many people assume that twins are the same, but I can’t help but ask about whether you are similar.

LISA-KAINDÉ DIAZ: We are really different, we’re opposites, but we complete each other. We have a weird relationship—we love each other, of course, more than anything, but we don’t really understand each other. We realized that music is our way to communicate, and our way to mix ourselves and to just to be together.

How do you each bring your own sound to the group?

LISA-KAINDÉ: We both have different roles in Ibeyi. I compose the basics, which are the melodies and the chords, and then I work on the lyrics with my family.

You sing in both English and Yoruba. Can you talk about that?

NAOMI: We never thought about it, because it’s us. We grew up listening to Yoruba music.

LISA-KAINDÉ: It came naturally, it was not intellectual. Yoruba comes from Nigeria and Benin, and when the slaves were shipped to Cuba, the culture [traveled] to Cuba. We are half-Cuban, half-French—we’re up with the Yoruba culture.

How would you describe your individual styles?

NAOMI: I love fashion, but I don’t have that much money to buy whatever. [Laughs] We both love art, from Frida Kahlo to Marina Abramović. I’m more into hip-hop and trap music, and she’s more into old school music. But still, what she likes I like and what I like, she likes.

LISA-KAINDÉ: I think art is important in whatever thing you do. You can be inspired by a book, a sentence, or a painting. My favorite painters are Frida Kahlo and Francis Bacon. I’ve been inspired a lot by Marina Abramović. I love Nina Simone. I love Santigold. I think she’s fantastic. I’m not as much into fashion as Naomi is but, I realize that image is really important when you do music. It’s something I’ve denied before and didn’t want to say before because I thought it was a lot of pressure. But then I realized that you can twist it in an interesting way and make art with it. I love working on visuals for Ibeyi. I love movies. I would love to compose music for movies—my favorite director is John Cassavetes.

Speaking of your visuals, can you talk about the videos you made for songs like “River” and “Stranger/Lover”?

LISA-KAINDÉ: We don’t like stories [told] in videos, because we feel like nobody will really understand them, and they’re not really clear. We always want to have…

LISA-KAINDÉ AND NAOMI: [In unison:] One idea…

LISA-KAINDÉ: One strong idea that you will never forget. You will see it, and you will always remember it. For “River,” we shot it with Ed Morris. In our first video, for “Oya,” you can’t see us. You see our shape, but you can’t really see our faces. We didn’t [show our faces] on purpose. We wanted people to just concentrate on the music. For the second video, XL [Records] and fans asked us to show our faces, because people were like, “Who are you?” We told Ed Morris that we had to show our faces, but we wanted it to be twisted. We didn’t want it to be about beauty; we wanted it to be about music. We wanted to stay true to ourselves. We said we wanted to work with water, and he came up with this amazing idea.

Shifting back to your self-titled album: Tell me about the themes within it that connect to your life.

LISA-KAINDÉ: The album is about our lives. It’s about losing people that we love, but enjoying life. We’re still alive, and we have to enjoy every moment of life. And, remember people that are going with a smile.

Are there things about each other that annoy one another? Any pet peeves?

LISA-KAINDÉ: Oh, yeah! Actually, I think what annoys us are some of our best qualities. What sometimes annoys me about Naomi is that she’s impulsive. She doesn’t take the time to reflect. She does [something] because she feels it, which sometimes annoys me. But, that’s one of her biggest qualities in life, and that’s something I would like to have. I think it’s the same for you.

NAOMI: I think what annoys me is maybe that she’s too emotional. Sometimes it’s a good thing, as she said, but it’s that I’m tough.

LISA-KAINDÉ: She’s a little bit too opinionated about who I date or not, but it’s because she’s overprotective of me…

NAOMI: Yeah, because I think she’s too caring. Sometimes I’m like “Nuh-uh.” She does what she wants—it’s her life. She lets me do what I want.