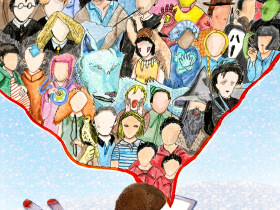 Life in Black and White

Mr. M
My seventh grade math teacher, Mr. M, had five million freckles on his face and slicked-back ginger hair that started popping out of place by midday, sticking up in different directions and making him look like a mama cat had just finished licking his head. He dressed monochromatically (red pleated pants with tucked-in red T-shirt on Monday, green pleated pants with tucked-in green T-shirt on Tuesday, etc.), and only seemed to have a week’s worth of outfits. He was young—maybe 25 years old—and new to the school.

I believe it was the combination of all these traits that made the kids in my class think it was OK, and even funny, to mess with him. Sometimes they had unabashedly loud conversations in the middle of class, just daring Mr. M to reprimand them. He deserves endless kudos and high-fives for simply having to deal with these people, but also because he was cool as hell to me the time I hulked out on this kid named Josh. See, Josh sat behind me in class and, one day, started poking me nonstop and calling me “Amber-een,” just to irritate me. Eventually I flipped out, summoned an—up until that point—untapped Herculean strength, picked up the boy, and then slammed him down hard onto his desk. Mr. M took me into the hallway. I thought he was going to yell at me or send me to the office. Worried that I was going to be suspended, I started to cry. Mercifully, he just told me that I was a good student and I wasn’t in trouble, but I couldn’t bodyslam people, even if they were annoying. That guy was so chill and awesome for totally letting me off the hook. A part of me, though, thinks he’d just probably always wanted to do what I’d done to Josh. —Amber Humphrey
★★★★

Mrs. P
I was an absolute fish out of water when I moved from Salt Lake City, Utah to Mamaroneck, New York in the fifth grade. I was into baby-pink cowboy boots paired with even pinker leg warmers in a sea of Abercrombie T-shirts and Uggs. Plus, I couldn’t pronounce half of my teachers’ Italian last names. When I entered middle school, I was assigned my first homeroom teacher, Ms. Paley. As I took in the raccoon eye liner framing her terrifying beady eyes, I thought it couldn’t be so bad…at least I could pronounce her name!

It was just a few days before I started coming home sobbing because of some awful tone Ms. Paley spoke to me in after giving me a terrible grade. Her crotchety voice constantly snapped when I mispronounced a word or got caught looking at deer in the woods outside. She had her favorites in class: the overachieving New York natives to whom she’d talk in a high-pitched, “sweet” voice. I tried so hard to win this woman’s affection, too: I wrote her nice notes and worked extra diligently on making the most inventive projects, but nothing I could do would make Ms. Paley like me. Her homeroom hierarchy was set in stone, and attempting to climb the ladder was futile.

The only good thing this woman did for me was toughen me up—and prove that my youthful naivety wouldn’t always be met with understanding kindness! The day I graduated middle school, I got my revenge, sticking my middle finger up at her classroom as I left the building with my mother (an act that was terribly devious to my 13-year-old self). —Mads Jensen
★★

Jay
The man, the myth, the legend: JAY. He started each painting class at my fancy-pants summer art school with, “HEEELLLOO, BROTHAS AND SISTAS,” circling the room in an outfit of a white tee and white jeans that perfectly allowed his more-than-colorful personality to amplify throughout the building. Jay, as we were told to call him, had sweaty, shaggy hair and all of his music (which played from an old, white boombox) reminded me of either The Cramps or Pixies. What a vision.

Every Monday, we would gather around the projector like the Butler Family and look at works, where the paintings of Carroll Dunham (father of goddess Lena) often made an appearance (+10 points). Afterwards, Jay would take us through the contents of his sacred handouts, which he handtyped himself and were full of excited punctuation errors and run-on sentences.

When I decided to base my self-portrait on Teletubbies, he greeted me with praise and several fascinating back-in-the-day tales about Jay returning home from raves, turning on the tube, and becoming mesmerized by the ‘tubbies. Still, after I worked on my painting for a while, I felt like I was going in the wrong direction, I eventually wiped it out and started over with one day before deadline. This move garnered a high-five and verbal “Badass Award” from Jay: life = made. If it weren’t for him sacrificing his late mornings (which he constantly reminded us of) and teaching at CSSSA this year, I would still be caught up in caring what people think (WHAT?!!?) and wondering what the purpose of art is (BLASPHEMY!!!). Not to be cheesy or anything, but Jay changed me (although, as he pointed out, sometimes cheese tastes good).  —Alyson Zetta
★★★★★

Lunch Lady
I had the best lunch lady in the world, hands down. Throughout elementary school, this woman was the crowd control for the cafeteria. She carried this mini-harmonica on a simple chain and wore it as a necklace. When it was someone’s birthday, she would play “Happy Birthday” on the little instrument, which was a really great tradition.

Her harmonica bit was so special, but I also liked her because of her dedication to the school and the students. Unlike other faculty and administrators, she never made me feel uncomfortable. She accepted us (the little ones) when everyone else talked down to us. She was a little eccentric, which was a breath of fresh air from the other stuffy adults in my life.

One week, I believe it was a faculty appreciation week of some kind and I wanted to pay my respects to the woman. I made her a card out of printer paper and crayons/colored pencils: a custom token of my appreciation. Being so young, I didn’t really anticipate the emotional value of the card—I mean, I loved her, but I thought that other people gave her gifts, too. When I gave her the card during lunch, she started crying tears of happiness. We even hugged, which I hadn’t expected at all. Because of her, I almost want to learn how to play the harmonica so I can pay homage to her while celebrating my birthday. —Chanel Parks
★★★★★

Apple Lady
When I was six, I liked to go to this place in my town called The Living Arts & Science Center. Think crafts, pottery classes, walks in nearby creek beds looking a bugs…generally, fun times for artsy kids. I loved it, but I do remember having one craft time experience that I didn’t take to: a craft class where a teacher made dried apple doll heads with us. What the heck is a dried apple doll head?! I didn’t know this at the time, but it’s basically what it sounds like: You carve an apple into face and dry it, and it becomes a wrinkly, creepy, shriveled face. I think they’re gross.

I didn’t know about these shocking end results at the time. I just sculpted my apple into a cat, the teacher collected it, and I forgot about it. (Look, I was six and easily preoccupied.) A few days later, I got my cat back, and to my horror, I had a shriveled apple cat-head doll that I had no idea what to do with. I give this teacher 4 out 5 stars for good intentions and coming up with a low-cost craft, but not the full 5 stars, because I ended up with a scary dried-out monstrosity. —Allegra Lockstadt
★★★★

Mr. Z
Mr. Z was my sixth grade teacher. He had a reputation for being WEIRD. He was definitely bohemian. He had some interesting theories, like that it was bad to have your body temperature change in extremes. After playing outside at lunch in the summer, we would return all hot and sweaty to our classroom, and he would refuse to turn on the A/C.

His wife was a teacher at the school, too, and instead of wedding rings they had TATTOOS of rings on their fingers. She had an earlier start time at the school, so she got to drive their car and he rode his bike. He was very into outdoor activities, though, and wore safari-like outfits and Teva sandals every day. I gave Mr. Z four stars for letting his freak flag fly, despite constant questioning from children, but I took off one star for making us sit in our sweat. —Kelly Abeln
★★★★

Magical Wizard Professor
Magical Wizard Professor is a magical art history professor who regularly rode a motorcycle when he was younger. In college, I took two of his classes on gothic architecture. One of the very first emails we students received from him began, “Dear Goths,” and that’s when I knew he was an A+ human being. He has a very witty sense of humor, and that, plus his British accent, made him a delight to listen to in class.

For one of the classes, we got to travel to France with Magical Wizard Professor to visit gothic cathedrals. He wore a really cute eight-paneled newsboy cap the whole week. At Amiens Cathedral, we climbed 300 feet up a spiral staircase, Magical Wizard Professor leading the line, bounding ahead of us on his nearly 70-year-old but nimble legs, with the rest of us huffing and puffing behind him. He slightly reminded me of Dumbledore because: British accent + old man + spectacles + white beard. And these gothic cathedrals might as well as been castles…aka Hogwarts. Throw a robe on him, and he would have been a bona-fide wizard. —Shriya Samavai
★★★★★