Shamir: In for the Kill

The premiere of a gorgeous, hilarious video by one of our favorite music makers. 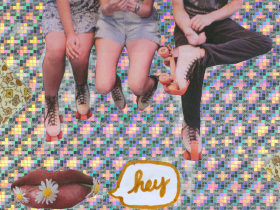 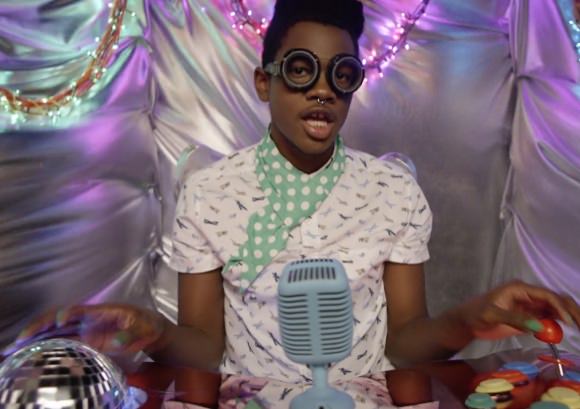 When I last spoke to Shamir—who gifted the world with a Rookie theme song in December and the album Rachet in May—the singer-songwriter went in on the merits of opening yourself up to the world and making yourself vulnerable in order to fully enjoy love and brain-expanding experiences.

This go-around, as Rookie premieres the video for “In for the Kill,” a song that is about the opposite, we thought about the occasional necessity of isolation, privacy, and hanging out exclusively inside your own neural pathways in order to create things that matter to you. And, what better setting for hermit-ing the hell out than a giant, flying jellyfish UFO, as Shamir pilots in this characteristically gorgeous, hilarious video? Behold:

Shamir popped into the Rookie office to hang and make us a very beautiful drawing before hitting the road. We took a walk to the park to discuss making time for yourself and your work even when you don’t have any to spare.

AMY ROSE SPIEGEL: When we last talked, your album hadn’t come out yet. How has that changed your life?

SHAMIR: A lot, it’s been crazy. I’m actually working now and touring and being a real musician. When you had first looked to me, I had just finished the album; I had only released my first EP that summer, and I had just been on my first tour, which had actually just been a week and a half. Now I’m actually touring, I have a band of my own. That first tour was just a bunch of friends. It’s like, “Come to Europe,” you know. I guess I feel more professional now.

What makes a good show for you?

The audience! I think it’s an energy exchange. If the audience is great, then I feel like I can be that much more great.

You’re playing Vegas soon. That’s going to be a crazy homecoming for you. Are all your people coming?

Yeah! My mom and her twin are coming. My mom hasn’t seen me since my show in L.A., but her twin came to see me on this last tour in Paris. I never thought I’d be hanging with my aunt in Paris, because she’s more like a sister to me. My mom had me really young, like at 19, so [my aunt is] kind of like my second mom, but also like a sister because she don’t “mom” me. But yeah, it was really fun. She hung out—she’s like a big kid with my friends. Everyone was talking to her, and I was off to the side. They’re like, “We love your aunt!” I’m like, “Sure.” [My family members] have always been big supporters.

That’s great. I’m so happy that you have that. I want to talk about this new video and this song that goes with it. It’s a lot about going and creating things on your own, right? When you were teenager, did you spend a lot of time making things by yourself?

Yeah, little periods. It’s kind of how I recharge and re-energize, especially starting off, when I was first learning guitar. I would go in my room, close the door and be writing all day. It’s almost kind of like my therapy, too, to sit there with a guitar in my hand and play and sing.

Do you get a lot of time to do that now?

How do you make time for yourself when you’re on tour, even if you can’t go and write?

I don’t know. It’s a lot of movement and a lot of work and transit, and then any free time that I have I’m sleeping. I think that’s the hardest thing on tour. The only reason I don’t bring my guitar is because I don’t want to add to the extra instruments that we bring. But, I want to see if I can try to find a good travel guitar.

Do you ever feel self-doubt when you make things and how do you deal with that?

I don’t really feel self-doubt. I’ve written so many songs in my life, and I’ve done music for so long, I’ve kind of learned. One time, I had this really bad thing happen to me, where I challenged myself to write a song every day, and I had this notebook full of songs. Every night before I went to sleep I wrote a song. And then, I lost that notebook.

I lost it. I figure I lost it at school. That, first of all, was very detrimental. It kind of made me feel like, Whatever. It’s just songs. It’s just music, blah blah blah. That’s kind of how I always felt about music until “On the Regular.” I kind of felt like, You know, I make these songs, and it’s a piece of art or whatever, but it’s not really anything. Songs come and go. But, “On the Regular” made me realize nothing I create or write is in vain, it’s all precious, and I should start to treat it more like that instead of like, Oh, I wrote a song. Whatever.

Are able to find more value in the things you do?

Yeah, and I guess that’s kind of a form of self-doubt. Now I’m like, “What I do is important.”

I agree with you. Absolutely.

A lot of artists go through that, too, especially struggling artists. Whatever happened to them, they’ll never be able to do what they love. I have to keep in mind that everything I do is good.

“In for the Kill” is about retreating from people in order to make things for those same people. You talk about work being a sacrifice, and you address the ones that you love and say, “I’ll be back. I’m sorry.” Where did that come from?

Those lyrics are manifesting even more now. I was talking to my mom this week, and she was sad because I won’t be able to see her until my show in Vegas, and even then I’m only there for a few days. I’ve been away for so long. I’m seeing it take a toll on my loved ones, like my family and friends back in Vegas. I kind of foresaw that [when I wrote it]. You know, I’d been traveling a lot and have been pretty much uprooted, because I’ve lived in the same place my whole life. I’m very sheltered that way. That’s why everything in that song is really real. It’s me saying sorry to my mom and my loved ones that I have to leave behind to do this. The bridge part, where I say, “Please don’t cry. Turn around and say goodbye,” it’s my goodbye; I’ll be back some day.

People talk about the exercise of writing every day or making a song every day, almost as a routine. But, it sounds like it’s something that occurs naturally for you. Is that the case?

Yeah, I’ve always been writing little ditties to myself since I was young.

Do you remember any of them?

The song that I remember is from when I was 12 or 13. I wrote this song called “Devil’s Bride” about a woman killing her husband.

Oh my. What was the plot line?

It was about a really harsh, evil woman. It’s still, to this day, one of my mom’s favorite songs that I’ve written. That’s one of my first songs that I felt was substantial and legit.

I love that it’s one of your mom’s favorites, and it’s about this homicidal woman.

It’s because it sounds like a cheesy pop song, but also that’s before I even realized it— that’s been my formula; It sounds uppity—like pop songs—but there’s a darker hint to the lyrics.

So much of your music is about this total acceptance that you are you and this is how it’s going to be, but not in a confrontational way. It’s this joyous celebration of yourself.

I love coming of age things. My favorite thing to see is the human condition, how we all change and grow, and what we go through at certain times of our lives. Much of the album is about life experiences, starting with Vegas—where I’m from— and living in a town that caters to others and not really to the people that live there: “In for the Kill,” which is about being uprooted from where you come from to do what you love, to “On the Regular,” which is pretty much an f-you to the haters. My favorite [song] is “Make a Scene,” because it’s about something that I really haven’t heard or seen people talk about; It’s about how hard it is to be between 18 to 21—where you’re an adult, but not really. You’re kind of half of an adult. You can live on your own, you’re paying taxes, but you can’t have a drink and you can’t go to certain shows. I’m really proud of “Make a Scene” because I know a lot of people feel that way.

You should be incredibly proud of all that you’ve done. You’ve made so much for yourself. It’s rad. What would you say to people who are at the age you were when you started?

First of all, because this is a problem for me to have to remember, you’re still young. I’ve been in music for forever–since I was 12 or 13—and I felt like the end was once I graduated high-school and wasn’t doing music full-time. I was like, “Oh whatever, this is the end. This is just going to be like a hobby thing for me,” which was the stupidest, like, “Bro, you’re 18, are you kidding me? You’re still young. You still have a massive amount of time. Don’t give up. Be fearless. Put yourself out there, really perfect your craft, and make time. Sometimes the hardest thing is to make time, especially when your life is crazy and you have work. You have to force yourself to be creative.” ♦