On “Doing It for Attention”

When I self-harmed, I did want people to notice—because I needed help. 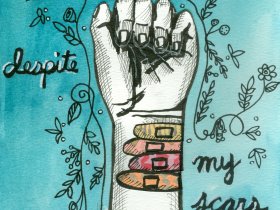 How to Ask for Help with Self-Harm 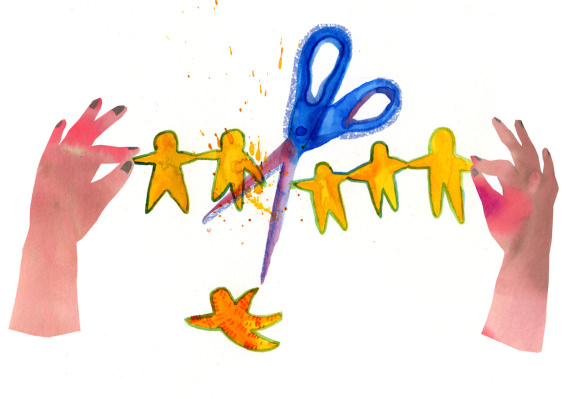 I started cutting myself in middle school. From the very first time I self-harmed, I silently prayed that someone would intervene and save me from ever doing it again. I resorted to self-harm to deal with the difficulty of being a new girl in not only a school, but a country far outside of where I grew up. I never verbally let anyone know how isolated, stupid, and insignificant I felt because I was too nervous, and felt too weak, to make friends, let alone to find someone I could trust enough to talk about my depression.

Rather than talking about my problems, I hoped my cuts would communicate what I was going through. I believed it would be easier and more gratifying to have someone else “care enough” to save me. Being the new girl wouldn’t matter anymore, because at least I would have proof that I had someone. I eagerly wore my school uniform’s short-sleeved shirts, hoping someone would notice my arms as I laid the backs of my palms flat on my desk. Maybe, upon seeing them, a classmate would tell their parent, or a teacher, that I was hurt, and that person would tell my mother, and I could finally go to a therapist, or something. Anything.

One day, a classmate did notice my cuts, and their mother did call mine. This, however, was not the loving intervention I had hoped for. The woman’s concerns, more or less, went like this: “Your daughter needs to stay away from my daughter. She’s a bad influence. She’s got issues. My daughter saw her scars, and now I am afraid she’ll start to hurt herself, too.” When my mother told me about that conversation, I felt even more worthless.

At school, word spread about the phone call—and my self-harm. Now, people stared at my arms constantly. During science class, a boy sitting behind me leaned forward and whispered, “What’s wrong with you?” My cuts were seen as a morbid fashion statement and a cry for attention—the latter of which, in a way, they were. But I didn’t want the entire school to know that I cut myself, or for people’s parents to call my mother and tell her, not that I might be in pain, but that she hadn’t raised her daughter properly. I didn’t want to be anyone’s trigger. The kind of attention I wanted was to be held and comforted. To be told that I could stop.

Out of the shame that came of that phone call, I began to try, really try, to stop self-harming. My mother enrolled me in an art class, which kept my brain busy and gave me something to do with my hands. I also joined the debate team, which helped me express my emotions through a different channel. (My speeches were always emotionally charged—I remember a judge scoring me badly because I was “too loud.”) With the help of these outlets, the cutting stopped, but I hadn’t dealt with the underlying sadness that motivated it. I was still hurting, even if the pain wasn’t as clearly visible on my skin.

In high school, I moved to another town—once again, I was the new girl. This time, I decided to deal with that differently, and I made a point of covering up my scars. I no longer thought people might see my cuts as signs that I was in need of compassion—instead, I thought they’d consider them a shameless broadcast of my own self-absorption.

Out of bitterness and fear, I began to judge other people whose self-harm was visible. One day at school, a friend and I were looking at a girl wearing a tank top and a short skirt. She obviously used to cut herself. Maybe she still did. “If you didn’t want anyone to see your scars, you’d cover them up. Anyone who shows them off is asking for attention,” I scoffed. My friend agreed, not knowing that, under my clothes, I looked the same way.

I tried to wrap my feelings up as tightly as my limbs. In senior year, though, they unexpectedly unraveled during a talk with my assistant principal about girls who were messing with me on Twitter.

“There are people out there who kill themselves over this kind of pain, you know? It hurts, and it’s mortifying to have people saying shitty things about you and threatening you online,” I told her.

“You’ve said that twice now,” she replied. “The part about people killing themselves over bullying or harassment.”

My assistant principal called the school district’s therapist, who sat down with me and talked about my depression and self-harm. Though my mom and I had addressed it briefly, this was the first conversation I’d had with a professional who really seemed to get it. He was helpful, understanding, and non-judgmental, and I felt I could actually confide in him. He saw what was going on at school, so he knew where I was coming from, and it made me feel like someone was there in the way I had always wanted.

My new counselor showed me I wasn’t alone in another crucial way: He started a therapy group for students at my school. Once every two weeks during sixth period, eight of us sat in a circle, rated our days, and talked about our issues. Group therapy was my ultimate savior from the sense of isolation that had plagued me. Now, I had tangible proof that there were people who struggled with and understood the pain I was going through, and would listen to me, knowingly, about how I felt. I could even take off my sweater around them when it got hot without wondering what they’d think. As time passed, I found I could take it off around everyone else, too. These days, my choice to show my arms and thighs depends on nothing but the weather.

Despite my progress, I am occasionally ashamed of my scars. I sometimes have a hard time fighting off the fear of being perceived as weak or flawed when I wear shorts or sleeveless shirts. Of course I know that I’m not—and neither am I stupid, nor messed up, nor an attention whore—but I worry that others might not think that way. Then I remember that that’s OK, and that I have the choice to ignore insensitivity. In group therapy, I realized that I don’t have to worry about the people who don’t understand. Instead, I focus on the people who do. I remind myself every day that someone who judges me for having had painful experiences is someone I don’t need in my life.

When a person self-harms, the problem isn’t if others think that “wanting attention” is somehow a character flaw. The problem is that the person is hurting themselves, and they deserve acknowledgment, care, and resources. They need help. When I looked at that girl’s thighs and arms with my friend, I shouldn’t have thought, Why is she showing everyone her scars? I should have asked the questions I always hoped someone would about me: Is she OK? And furthermore: Should I let her know that I’ve been there, too? I tried to justify closing myself off to the validation and care I yearned for, so I said that the girl’s scars—her pain—didn’t matter. But it did, and mine does, too.

These days, if people notice my scars, I hope they can see that their message has changed from the one I tried to send in middle school. I want to let people who might be covering their struggle with self-harm under sweatshirts and long pants to know they are not alone, that what they have been through does not have to be secret in order to be “valid,” and that they don’t have to hide their histories out of shame. In revealing my skin, I am not asking for help anymore. I am offering it. ♦