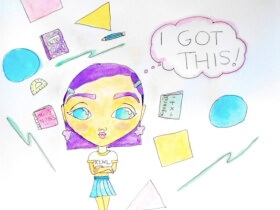 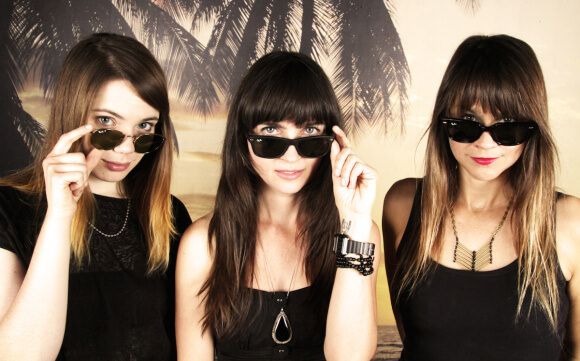 Moving Panoramas is a great name for Leslie Sisson, Rozie Castoe, and Karen Skloss’s shoegaze band because their music paints such beautiful landscapes. Maybe you’ll agree after you take a listen to their first album, One, which we’re premiering here:

Singer/guitarist Leslie met bassist Rozie while teaching music at School of Rock in Austin, Texas. Meanwhile, Leslie and drummer Karen had their own thing going in a band called Black Forest Fire. When those ventures came to an end, they joined forces and started recording One, which comes out on October 2.

I recently chatted with Leslie about One, learning independence from her late mother, and her love for honky-tonk music.

LUCY BETZ: What’s the story behind the album’s title song? It has such a strong message.

LESLIE SISSON: I wrote this song while thinking about my mother. She passed away a few years before then. When you lose a parent when you’re younger, you [can] struggle with decisions in life, like, “Oh, crap, what am I doing?” She passed away before I had time to get married or have kids. She had kids at a very young age, while she was still a teenager. She molded me to be an independent person while growing up. She taught me how to be OK with being alone. I wasn’t an only child, but she raised me to be OK with being myself, and to love myself before I love anybody else. It was a good way to raise me. She depended on my dad for a long time. When they got divorced, she struggled financially on her own, and she lost her youth in some ways. I think that’s why she taught me to value myself so much, because sometimes you are all you have. I’ve come to learn that even though I have my family and friends who I rely on heavily, it’s empowering to be OK with me. It’s kind of a sad thing, that we live in this world alone and leave alone, but it’s also empowering to not be afraid to be alone. You then value being around people even more.

I [also] wrote that song after a breakup. I’d just gotten out of a relationship, and the guy I was with wanted to get married and have kids, but told me he didn’t think I was ready for any of that. The song came out of that, but I hope it’s a hopeful message for people. I wrote it while thinking of Three Dog Night’s [rendition of], “One.” As I was listening to the song, I realized, No, wait, one is an awesome number! Being alone is great!

Was writing the song cathartic for you?

Oh yeah! Writing songs is always [cathartic] for me. It’s like therapy. When I write songs while I’m happy, they’re cool, but when I write them while I’m going through something tough, I think they are cooler. They have more strength and power behind them. I’ve been using music as an outlet for many years, and it seems to be constant in my life. Even if my guitar is halfway across the room, and I feel like it is way too much to take on at that moment, playing music always ends up changing my tone and mood. It’s amazing.

You’re based in Austin. How does your location influence your music?

There’s a really warm and welcoming collection of people here who just love music, and the music coming out of Austin right now is so inspiring to me. The array of music is so wide; there are people playing rock and roll, people playing country, and there are young people in honky-tonk bands. I’m even in a honky-tonk cover band on the side called Rolletta and the Rated Exes. While I’m scraping to get by on a musician’s salary, I get to flourish creatively here. I don’t anticipate leaving soon.

What influences you nowadays?

The first music I ever heard was country and honky-tonk music; I grew up listening to Johnny Cash and Dolly Parton. My dad was a country and blues musician, and my grandparents were super into country music. I have memories of watching my dad perform country music at bars. As I got older, I drew away from country; I don’t consider myself a country person, and a lot of kids shy away from their roots and rebel. I was punk rock for a while, and then I was goth. I was into shoegaze, which is where I learned a lot about music. I’ve been trying to write country music for fun, but I realize I end up taking country music and making it dreamy and shoegaze-y. I’ve also been really inspired by the psych scene here, especially the Black Angels. Austin’s Psych Fest floors me every year, because every band on the bill is inspiring.

Where would you want your fans to listen to your music to get its full effect?

A lot of people have told us that they listen to our record while driving, which I can relate to. My dad lives three hours away from where I am right now, so I’m always driving out there. I’ve also spent a lot of time on the road with other bands. That feeling you get, when the windows are down, and you are looking out the window while music plays—there’s something to that. I would always shoot videos while I toured, and I’d inevitably end up shooting out the window. I was also really into theater when I was younger. I’d always wanted to do a moving panorama set, like as an old-time-y Wes Anderson movie backdrop; that’s really what I wanted Moving Panoramas to be. ♦