An album premiere by the super driven singer-songwriter. 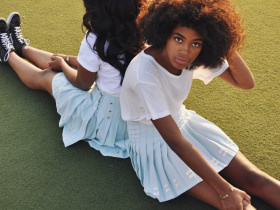 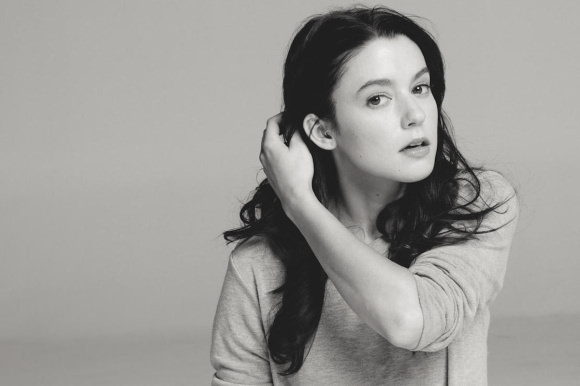 Meg Myers is used to carving out her own path. Having spent most of her childhood moving around before settling in L.A. (where she lives now), the multi-talented singer-songwriter, guitarist, and keyboardist turned to music as a means of escape and to channel her emotions. Today, we’re excited to premiere her debut full-length, Sorry, which you can listen to here:

I talked to Meg about how recording Sorry changed her, how she’s kept hustling, and how she stays centered amidst the music industry’s pandemonium.

ANNE T. DONAHUE: Congratulations on your debut album! What was the most challenging part of waiting to release it?

MEG MYERS: Thank you! The most challenging part was finishing it! I’ve been doing a lot of touring the last two years, and every time I came home I went straight into the studio to work on it. It’s difficult to stay in that focused, creative world when you’re traveling too much–especially when you know you’re about to go out on the road again.

Well, contrary to what I [just said], the touring ended up being an unusually good thing for the making of my album. Unusual because it was really hard on me physically and mentally–I got sick a lot–but it made for some great writing material! “Motel” and “Feather” especially came from that world. I also think that from 26- to 28-years-old, I did a lot of growing. My taste in music got a lot softer, and my idea of what a good song is, feels, and sounds like grew.

On top of being in a new place career-wise, you spent a lot of your childhood and teen years moving, too. How did you learn to make each new place your home?

To be honest, I never really felt fully at home anywhere growing up. When you move so much and never know if tomorrow you’re going to be relocating again, you kind of just do your best to get through each day. Luckily I was and always have been really close with my siblings, and that is actually what helped me get through. They are my best friends.

How did you make other friends in your new towns? And, how do you make them now?

Being that I didn’t go to public school until after 12, it was difficult to make friends my age. But I did always have friends–mainly through playing music locally or through my siblings or my mom. Here in L.A., I made a lot of friends through working different jobs over the last nine years, and a few of them are still my very close friends. Unfortunately, I don’t get to see them that often, but they understand—and I know—that we’ll always be close, even with the distance. In this business, especially at the stage I’m at, you don’t get much balance in your life. And I mean to be honest: When I do get a chance to breathe, I am quite the hermit and end up spending that time I do have alone.

Do you think having to start over so many times has helped you develop your creativity?

I do. I think every time I had to start over, I was excited, but also moving around constantly for a kid can be very hard. I think I was always open to it because I was so used to it, but I’m sure if I didn’t have that creative outlet, I would have been so much more rebellious than I was. Having a creative outlet grounded me and made me feel less alone. I really needed that for all the emotions I was hiding—not only from my family, but from myself even.

Did you see music as a constant or an escape?

Sometimes it’s the only escape. I still feel that way. Sometimes, though, when I feel so flooded by emotions, it’s hard to write. That’s when other arts help me out, like drawing; even things like meditation or exercise can help.

I’d like to talk about “Sorry.” It’s your album’s title, and also its first single. You can apply it to a romantic relationship or a friendship, but the video shows you confronting your past. Is that the perspective you wrote the song from? As an adult confronting your past self?

I actually did write the song about a relationship, [but] I don’t always want the video to represent exactly what the song is about. It’s nice to step out of the box once I’ve written the song and discover other meanings that the song could be about for me. Also, because I think sometimes when I write a song there are hidden feelings that I don’t even realize I’m expressing, and don’t have a clue when I’m writing it, that it’s coming from these other places. Now, when I sing it live, it has different meanings depending on how I’m feeling that day, or depending on what I’m going through at that time. All of my songs generally end up that way.

What I also love about your story is how hard you’ve hustled. You work hard and have worked hard for a very long time. What did you tell yourself in moments of feeling discouraged?

It may sound strange, but I think I’ve had the hardest time believing in myself only recently. I’ve always believed in myself and my dreams, fully: 100 percent. I’m not sure why, but I always have. Being in the industry, though, things can change–perspectives on things can change. I’ve really struggled to believe that what I do can stand a chance in all of the bullshit that I can’t stand to be a part of. I try to keep myself as distant in my mind and physically as I possibly can from all of it by meditating, being in nature, and keeping in touch with my family. That helps me regain my strength and the courage to go on. In the end, I reckon all I can do is be myself, follow my gut, and ignore the things that don’t feel right.

That’s the best. What dreams do you have now? How do you make sure you stay in the moment while you pursue them?

I love gorillas. I really see myself working with them someday in some way. I’ve always been fascinated by how similar we are and how deeply in touch, intelligent, and emotional they are–all animals, really. I also just love nature and being physical in it. I’ve never been great at staying in the moment. Though, since I’ve struggled mostly with it this last year, I’ve recently found some things that help: The Power of Now is an incredible book that has really helped me. Also: nature, meditation, and creating and listening to music. Classical music [helps], and Enya. Lately I’ve been listening to a lot of Ryan Adams. Anything that takes my mind off the past or future and brings me into a beautiful place of the now. I love daydreaming in nature or just lying in bed, daydreaming. I can’t think of anything that makes me happier. ♦