Literally the Best Thing Ever: Afropunk

The festival offers me a place to belong. 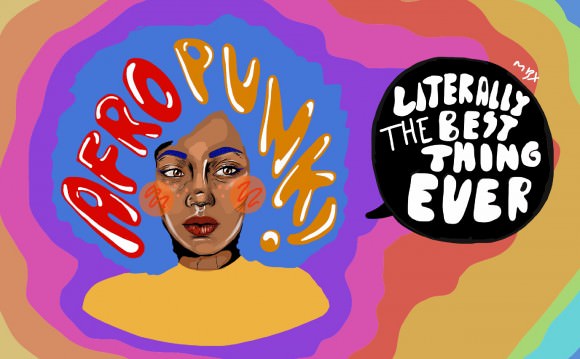 As I entered the perimeter of Brooklyn’s oldest park for the most recent Afropunk festival, the smell of shea butter, smoked cloves, and Caribbean pineapple drinks enveloped me like a familiar old blanket. Born out of black punk rockers’ need for a haven beyond all-white and sometimes racist punk spaces, Afropunk is an annual festival that highlights black music and subculture. Instead of walking briskly like I usually do, I entered the site of this year’s festival at a leisurely pace, intoxicated by the opportunity to commune with like minds, and to see musical legends like Grace Jones and Lauryn Hill perform.

I walked from the perimeter of the park toward the center stage, taking in the political banners, the moshpits filled with black people, and the brightly dressed carefree black girls taking selfies. The sense of freedom and collective joy was so captivating that I stumbled and almost fell onto the smartly dressed young man next to me. I looked up to apologize and caught a glimpse of the text he was sending: “Everyone is so black, and so beautiful. #BlackLivesMatter.”

I don’t normally eavesdrop on people’s texts, but this one called out to me and I couldn’t avert my eyes: It was exactly what I’d been thinking. This stranger, whose name I never learned, was part of a moment in time that felt to me, and I’m sure many others, like a celebration of multi-dimensional blackness. The powerful and unapologetic revelry of black and brown activists, artists, and creative people, stood in bold opposition to a dominant narrative that limits us to stereotypes and monolithic representations of blackness.

My history with Afropunk started two years before the launch of the first festival. In 2003, during an all-ages show at DC’s Black Cat in 2003, I ran into friends who told me that Forbes Graham, our classmate was in a new film about black punk rockers and fans. A few weeks later, I attended a jam-packed screening to watch James Spooner’s Afro-Punk, a documentary that surfaces the stories of black punks in the United States. In the film, the interviewees discuss racism, exclusion, dating across race, and alienation in punk scenes.

The first Afropunk festival I attended in 2006 had a similar vibe to the documentary screening I had attended three years earlier. It was held at the iconic music club CBGB, and this iteration of Afropunk kept to a mostly hardcore, metal, and punk aesthetic. More spikes and grit than neo-soul, mostly punks attended these early events, and their style and sound were anti-establishment. Over the years, I’ve witnessed Afropunk’s expansion from an intimate, mostly-black and brown punk DIY event, into a marquis-level festival with corporate sponsors and ever-larger crowds.

This year’s Afropunk felt like a pivotal moment in the history of the 10-year-old festival. In the midst of an upswing of racialized state violence, and the aftermath of Sandra Bland’s death in police custody, the expansion of Afropunk’s reach to 60,000 participants helped channel significant energy and visibility to a long legacy of black resilience and celebration in the face of adversity. More media outlets have covered this year’s Afropunk than ever before. It’s notable that even style pieces have featured images of participants wearing political T-shirts and adornments that express diverse ideas of what it means to be black. These depictions of pride, liberation, and self-definition are forms of defiance in the face of state violence. Just as importantly, Afropunk provides space for those who identify as black punks, or misfits, or eccentrics (and everything in between), to see and celebrate each other in our full dignity, diversity, and complexity.

While music has always been at the center of Afropunk, the opportunity to be a part of a vibrant community that loudly and intentionally welcomes black people of all genders, ages, sexual orientations, and sizes is a salve for the isolation that occurs in the midst of pressures to conform and assimilate to survive. With every compliment I received from passersby on my dreadlocks, vintage print dress (I got it from my mama!), and my presence overall, I thought of my parents’ stories about the “black is beautiful” cultural movement in the ’60s. These rare and genuine affirmations of my features, countered my own internalized racism, and societal messages about my inherent otherness. Afropunk provides me with a sense of belonging on a continuum of blackness that didn’t limit what or whose music I could like, how I dressed, or who I could be. Breathing in the air and the love, I committed the feeling of belonging to memory, so I could savor it during a future moment of alienation.

Honestly, I entered this year’s concert with concerns about how the formerly free festival’s positioning of more mainstream acts over punk bands, and a new paid-ticket price might undermine the integrity of the event. I regard Afropunk’s expansion into the mainstream as I do many of the contradictions in my own life. My experience at Afropunk showed me that it is OK to be critical about the things we love as they grow and change, and while I mourn many of the aspects of the festival’s early days, I value that more people are being exposed to the power and beauty of this community. I left Commodore Barry park feeling enlivened by the endurance of the anti-establishment ethic that remains in the hearts of the attendees I met. This set of values is also reflected in Afropunk’s Global Initiative to engage youth in community action, and their fundraising for an independent investigation of Sandra Bland’s death.

Although I found myself groaning at occasional glimpses of cultural appropriation (I spotted a white girl sporting a bindi, African print, and a feather headdress. Yikes!), my delight was restored by circles of my magical sisters dancing in celebration of this moment, and of their lives—our lives. As I swayed to Sza’s sultry witch-house sound and gushed over a radiantly pregnant Kelis, I twirled around and took it all in. Instead of being in my usual position as one of the only black folks in a space, or one of the only people in an interracial relationship, I was surrounded by countless other people who look like me, and their multiracial families.

At the height of my dancing haze, the DJ onstage led the crowd in a sing-along to Nas’ “If I Ruled the World.” We sang in unison, “If I ruled the world/Still living for today, in these last days and times/And then we’ll walk right up to the sun/Hand in hand/We’ll walk right up to the sun/We won’t land.” As we sang, it hit me: While Afropunk 2015 offered me a comforting sense of affirmation and belonging, its celebration of contemporary black culture and resistance to conformity also captures the hopefulness of the present, and honors the possibility of our future liberation. And for me, that is literally the best thing ever. ♦