The songs that mean the most to the woman behind the Internet. 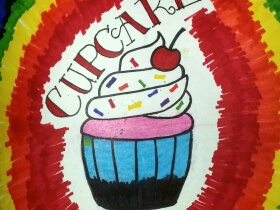 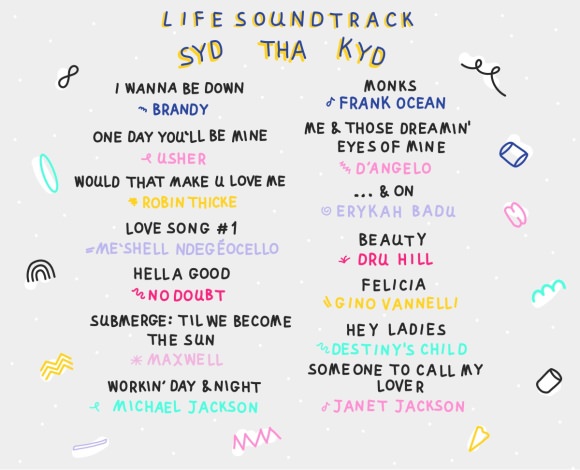 Syd tha Kyd got her good taste in music from her mom. When she was growing up, the songwriter/DJ and The Internet’s front-person (born Sydney Bennett) would wake up and go to sleep to the sweet sounds of R&B and soul that Janel Bennett played from the living room.

“My mom is a big lover of music. We had a surround-sound system in my house, so in the mornings and nights she’d play music. She put me on to all the stuff I grew up with,” Syd says. 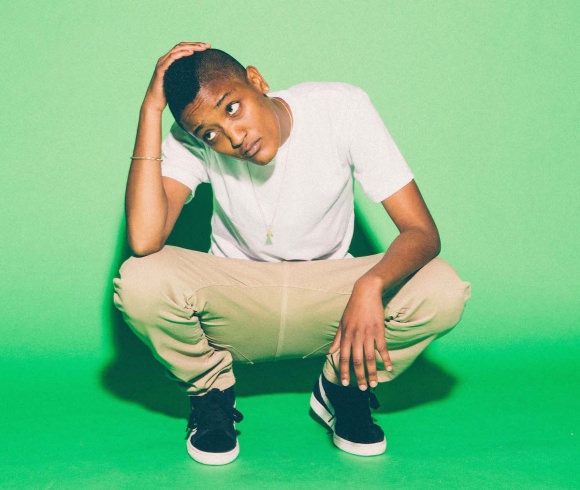 For our new series, Life Soundtrack, we ask a special someone to curate a playlist that gives us a glimpse into their mortal experience. Today, Syd tha Kyd compiles some of her favorite songs (from artists like Erykah Badu and Destiny’s Child), a handful of which her mom introduced her to, and some that make her reminisce about her high school days.

Behold the 14-song soundtrack of Syd tha Kyd’s life, and the reasons why these songs hold a special place in her heart:

The Brandy album was one of the first albums I ever had. I’ve been singing this song since I was kid.

I got Usher’s album My Way with Brandy. I got them both for Christmas. I gained a new appreciation for this song when I started singing because it’s fun to sing. It’s also something I can relate to, content-wise. [Laughs] I know the feeling of wanting to [steal someone away]. But, I’m really shy, so I couldn’t, even if I really wanted to.

3. “Would That Make U Love Me” by Robin Thicke

I used to sit in my high school math class [and] never really pay attention. I’d just listen to The Evolution of Robin Thicke. My mom bought it for me. This song was emotional for me at the time, because I could relate to it. And I think Robin Thicke’s falsetto is one of the things about him that people love the most.

I was in high school when I first heard this song. My hairdresser was bumping it in her car when I pulled up to the hair salon. My mom was like, “What is that? That’s amazing.” I agreed with her. Come to find out, my mom had that album by Me’Shell, or another album by her, but she’d never heard the song. Actually, it inspired the title for my song “Love Song -1.”

When I rediscovered this song, it became the best song I ever heard. I was like, Why didn’t I appreciate this when it came out? I think it’s because I was a little younger then. When I heard the song, I was going through a phase of wanting to listen to more punk-sounding stuff. It was perfect timing.

6. “Submerge: Til We Become the Sun” by Maxwell

This another song that I grew up on, that my mom put me on to. I was putting a lot of music on my computer, when I ran across that album because my mom had it. I was like, “Wow, this is amazing!”

Off the Wall is my favorite Michael album. I grew up on Michael, but I grew up more on his newer stuff. Going back and listening to this album [later], it became my favorite. The groove on “Workin’ Day and Night” is just amazing—you can’t help but to move.

The way Frank writes—it’s very ambiguous. This song is one of my favorites on Channel Orange, but there’s something about that beat and the drums that caught me off guard. The story behind it, I completely don’t understand, but I think that’s what makes me listen to it again and again.

9. “Me and Those Dreamin’ Eyes of Mine” by D’Angelo

This song is my favorite song off Brown Sugar—it’s just written so beautifully. D’Angelo is my favorite male artist. Going back and doing my research as an adult, years ago, it was a game-changer for the way I looked at music and the rules, or lack thereof.

Erykah is one of the few artists that can remake one of her own songs, and make it better. I grew up on Baduizm, but listened to the cuts my mom listened to. She used to listen to “…& On.” It made me look at music differently because she was able to implement hip-hop in R&B so naturally.

It’s one of those songs that I heard and had to keep listening to, when I re-discovered it. Also, ’90s R&B was one of the best eras of music.

His spirit is so uplifting and inspiring. He’s very flamboyant, and his voice is so flawless. I found the album Powerful People when Tyler, the Creator tweeted about it. Then I found the “Felicia” video, and I fell in love with the song. It talks about a girl who doesn’t appreciate you when you’re there, and says she’s gonna cry when you’re gone. I can definitely relate to it.

I had The Writing’s on the Wall as a kid, and bought it on iTunes a year ago. The thing that caught me off guard about this song was that they were singing so fast. I was amazed by the vocals. It’s funny: It ends with, “Thou shall move on to the next.” “Bills, Bills, Bills,” “Jumpin’ Jumpin’,” “Bug-a-Boo,” and “Hey Ladies” uplifted women to know their worth, and that they deserve more.

14. “Someone to Call My Lover” by Janet Jackson

The harmonies stood out for me, because I would’ve never picked out the notes that they did, but they’re perfect. I try to notice stuff like that and learn from it. ♦