If It Makes You Different, Do It

An interview with the cabaret performer and comedian Bridget Everett.

Literally the Best Thing Ever: Afropunk 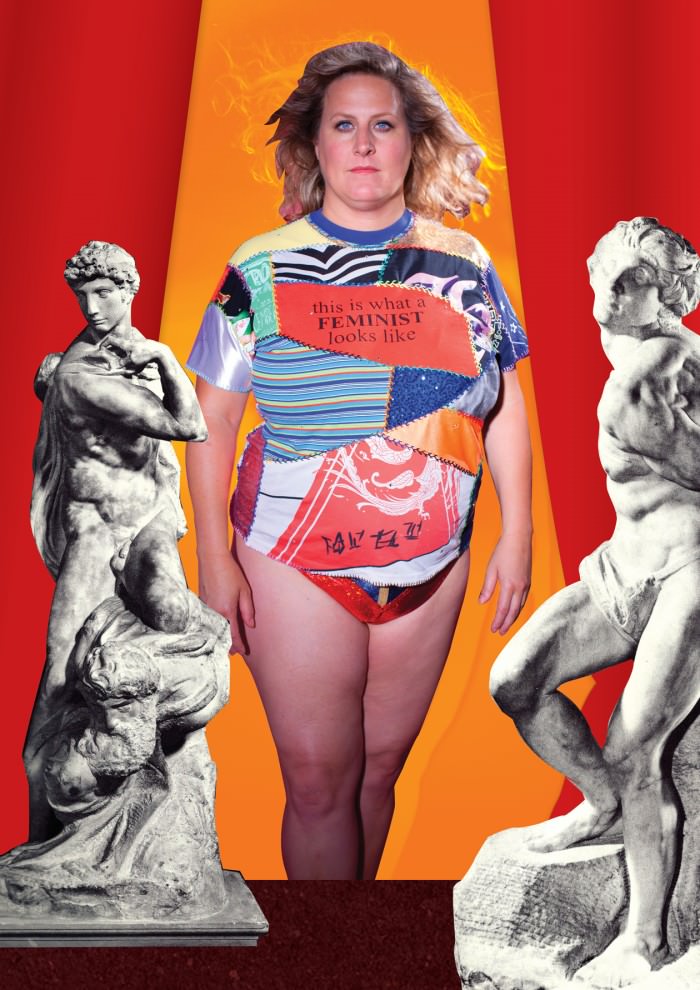 Collage by Ruby Aitken, using a photo by Todd Oldham.

Have you ever seen someone on stage who was so fearless, so magnetic, and so totally their own freak-self that the audience was entranced, in love, and a little scared all at once? Bridget Everett—a trained opera singer, the leader of her own band, a legendary New York cabaret performer, one of the most delightful on-screen cameo-makers (her appearances in Sex and the City and Trainwreck are among the evidence), and the star of her own Comedy Central special—is one of those performers. We talked to Everett, who lives in New York and grew up in Kansas, about the fun and importance of doing what makes you happy, and doing what makes you different.

MADS JENSEN: What was it like growing up in small-town Kansas? Was it boring, or beneficial to creativity and self-reflection?

BRIDGET EVERETT: You know, Kansas is an easy place to make fun of. I know I have, and people laugh at me all the time when I say I’m from there. But the truth is, I really loved it. My best friend, Stephanie, and I have known each other since we were born. We got caught doing a lot of stupid shit like smoking cigarettes, sneaking out, playing strip poker…god only knows. But we also had sleepovers, played kick the can, and listened to Purple Rain together on vinyl when someone broke our hearts. Growing up in a small town informed the person I am today. I had great friends like Stephanie, but I also hung out with my friend Alanna from across the street and her dad, who was a poet at Kansas State University. We would rake the yard, and he would tell us stories that were HILARIOUS. I was on the swim team and in two choirs, and I lifeguarded in the summertime. My friends were cheerleaders, choir geeks, Mormons, student council members, outliers, and everything else between. It didn’t matter.

You have such a potent, powerful presence during your shows. How did you go about developing your act?

Well, it’s taken some time. My mom has always been a real believer in Bridget Everett. She knew I wanted to be a singer, and even as the years were ticking by and I wasn’t finding success, she kept cheering me on. She knew it would happen for me, and her influence is immeasurable. But even with her support, I struggled. I looked to people around me to let me know I was good enough or important or talented or whatever, but it wasn’t until I clocked what I was thinking about myself that I really developed confidence. Professionally, I started believing in my own ideas and what was making me happy and doing exactly what I wanted to do. My whole life changed. Seriously. It was that simple. I wish I had a crystal ball and I could go back 20 years and say, “Listen to yourself, Bridget!” because the truth is, if you’re different and you are doing things that aren’t cool or trendy, you should keep doing them if they are making you happy. You have to follow your heart. In the beginning, people thought I was really wild, and I was, but I was doing what I wanted, and I still am, and I’ve never been happier. With that happiness comes confidence.

It’s hard! I’m not a prolific writer. I come up with silly ideas and sing them into my phone. If they make me laugh after a week, I work on them some more. Mostly I sit in the tub with my phone and try to make myself laugh—that’s when I write it down and show it to a friend.

How did overcome any hesitations about openness—or have you always been the incredibly open, vocal person you are?

I’ve always felt a connection with the audience, and I tell them things I would struggle to tell a close friend. The thing is, music is incredibly personal—to me and most other people. I can emote and communicate things through songs that I never could over a cup of coffee with a buddy. Singing is like some great equalizer, I think. It brings us all together.

Your performances are very interactive—you are quite literally in your audience’s faces. How to you pick which people to interact with? Has anyone complained or, like, tried to sue you?!

Nobody has tried to sue me, thank god! I usually pick someone who looks like they’re into the show but not trying to be the star. I don’t want to pick someone who is reluctant. That’s bad for them, and bad for me! My ultimate goal is for everyone to walk out feeling like a winner.

What made you transition from classical singing to cabaret?

I studied classically because I thought that having an instrument that was well-trained was important. I still feel that way, but I couldn’t drink or smoke or stay up late when I sang opera. You could hear the fatigue in my voice. I loved singing in a classical style, but I did not love not being able to live my life. Next up was karaoke, which I loved. I could stay out late, sing like a maniac, crawl on top of the bar, rip someone’s shirt open, and it was SO MUCH FUN! Karaoke was my gateway drug into cabaret. I’m basically doing what I did in cabaret bars all those years ago, but now I get paid.

How were you able to support yourself while pursuing your career in its beginning stages?

I waited tables, and I just quit last year. I did it for about 25 years total. I haaaaaaated it, but it was worth it. I say do whatever it takes to keep your dream alive! If you really love it, there is no timeline. It will work itself out when it’s supposed to.

Your shows are so raw, tender, and intimate—it must be incredibly cathartic to reveal so much of yourself to strangers on stage. How much of your content is factual?

It’s largely factual, and it definitely feels cathartic. When I go to a show, I crave the personal elements. That’s what does it for me as an audience member. So when I’m performing, I want to give what I get, if that makes any sense. It always seems like a first date when I do a show. I want the audience to feel like they’ve met a nice person who was easy to talk to, maybe a little drunk and a little off the rails, but someone they would feel comfortable having coffee with around the breakfast table [while] their bra’s hanging on the bathroom door.

How did you and Amy Schumer meet? You’ve appeared on Inside Amy Schumer as well as Trainwreck—how has your experience performing on stage differed from your involvement with television and film?

I met Amy at the Just for Laughs festival in Montreal about five years ago. We hit it off immediately. We have very similar senses of humor, and I’d like to think we’re both pretty laid-back. She’s a tremendous person and friend—very loyal and open and, most important, fun to be around. She’s been a big supporter of my live work and wanted to expose me to her audience. She writes parts for me that she knows will make me shine, and she doesn’t do that for just me—she does it for a lot of her friends. It’s very cool. As her star rises, she’s looking out for those around her. I’m incredibly proud of her and happy for her success.

What’s next for you? Would you like to stay in cabaret, or go into other kinds of performance?

You mean like Dancing With the Stars? Kidding! Singing is the love of my life, so I’ll always do that. But, yes, I’d like to try other avenues of performing. I’ve done some TV and film, and I like it. I know I need to challenge myself, or I’ll get bored, so I’m going to be taking some big chances in the next year. Wish me luck!

How do you beat boredom or overcome personal creative blocks?

I’ve been in a major writer’s slump for a while now, so I decided to think less about writing and more about having fun. It’s working. I write about my life, so the more I’m actually living it, the more I’ll have to tell. [The TV producer and writer] Michael Patrick King told me years ago to keep a small book in my purse and whenever something happens, write it down. It’s so helpful to me. That’s how I came up with the ideas for my songs “What I Gotta Do” and “Titties.” I recommend it!

What are the most bizarre or least delightful aspects of what you do for a living?

The most bizarre–slash–least delightful is also the most delightful: It’s the people. I travel a lot, and people in airports and train stations are always in a hurry and rarely show their best sides, elbowing each other to get on the plane first—in such a hurry to get wherever they are going that they run over people’s toes with their bags and seriously don’t give a shit. But on the flip side, there are those who are saying goodbye to their loved ones or picking them up at baggage claim, and it’s always really sweet.

What’s the best advice you could give to young artists, or really anyone trying to sort their lives out or begin the pursuit of a specific goal or career?

If it makes you happy, do it. If it makes you different, do it. Listen to the voices in your head that are telling you to take a chance. It’s worth it. And if you have people around you who don’t want the best for you, get rid of them. It can take a really long time to reach your goals, but if you are following your heart, the rewards are endless. ♦