An interview with the comedian and actress Jenny Slate. 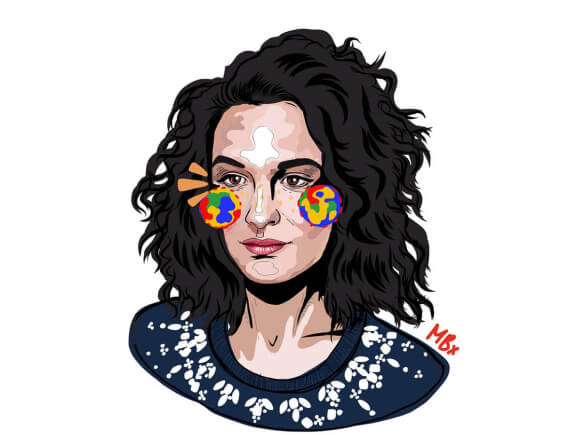 If you have caught a screening of the 2014 independent charmer Obvious Child, or tuned in to episodes of Kroll Show, Married, Bob’s Burgers, Parks and Recreation, or have giggled along to the YouTube series Marcel the Shell, you’ve gotten a taste of the highly addictive, bulk-section trail mix that is the work of actress and comedian Jenny Slate. It’s overwhelmingly sweet, a bit nutty, full of energy, and handfuls upon handfuls of delightful. If only Jenny could fit in the fanny pack that I take with me on hikes, then this metaphor would REALLY SOAR!

At 33, Jenny’s amassed many of the exciting, admirable accouterments of a comedy star on the rise: joining the cast of Saturday Night Live, taking on leading roles in critically-acclaimed films, strutting down red carpets, and collaborating with brands such as Gap. What’s most magnetic about her is a charmingly sincere and brilliantly tender dedication to proudly being an emotional being, and allowing her heart to color all of her work.

I stole some of Jenny’s time while on a family vacation to talk about creativity and emotion, because, as she’ll tell you, it’s best and most beautiful when those things are tangled up together.

You seem like someone who’s not really embarrassed by anything, ever, which I think is maybe every teenager’s post-adolescent dream. Confirm or deny! Is this something you were born with, or felt yourself develop over time?

I would say I’m embarrassed a lot, actually. It’s really about how you weather it, you know? I feel embarrassment very keenly. As a pre-teen and teen, from 12-to-15-years-old, I was really classically bullied and rejected in school. I felt that pain a lot; I felt it in a really, real way. It was the worst for me in seventh grade; there was a group of girls that really laid it on. My mom gave me this book by Margaret Atwood called Cat’s Eye. I think it saved me. I was at a point where my parents asked me if I wanted to switch schools, but I had been going to this school since kindergarten. I wanted to go all the way through to the 12th grade, because that’s what I always thought I would do. The bullying was so bad that I was paranoid about it; I felt like even if I went to the new school, something would happen where the mean kids from the old school, even if I’m cool in the new place, would tell them and they’d find out that I wasn’t cool and suddenly it will be even worse, because I tricked them somehow! [Laughs]

It was that bad…and then I read Cat’s Eye. It’s written from the perspective of a woman maybe in her ’50s. She had gone through a couple of marriages. She’d become a successful visual artist. Her life’s been full and rich, but she’s never forgotten being bullied and controlled by one of her friends who became a sort of frenemy in her teens, and a large portion of that book took place in that time. I think my mom’s message to me was: You’re right to feel this pain really deeply, because it’s forming you, and it’s not fair, and it’s real aggression. It’s not fake aggression just because it’s coming from kids. It’s real, and you can choose how to metabolize it. There’s a part of me that, when I look at pictures of me from my teenage years, I think two things: One is like, yeah, I was super awkward! That is real, those are the facts! The other is, during that time, I always dreamed of what it would be like to be a woman and how I was really excited about that, and knew that the time would come. Now, and even at that time, I wish people would be nicer to me in school, but I didn’t wish I were somebody else. I never look back on those diary entries and see me being like, I wish I was cooler! I think I always liked my personality. I always was just very…little? There’s a ton of entries that are like, I wish I could French kiss. I wish I had boobs, when is my period coming? No one’s ever gonna touch me. So, yeah, I’d say I’m embarrassed, MORTALLY embarrassed, hmm, once a day. It really is just how you weather it. I was saying to my husband the other day [that] when I’m exercising, and my body hurts, I’m not convinced something’s wrong. I’m just like, I’m in pain because that’s what’s supposed to happen. Everything’s supposed to burn right now.

Oh, really? Because when I’m at gym class, I’m pretty sure that pain is the feeling of my body slowly disintegrating into death. But yes, I get your point!

There are some times when something is wrong, like when your shoulder is hanging out of the joint? Maybe stop there? But in general, I think I try to avoid pain and discomfort as much as possible. I’m not a marathon runner. I don’t hang out with people that I think are mean, or make me nervous in a bad way. I also don’t flinch from being bent backwards emotionally sometimes, because I know I’m capable of the spring back.

I see that fearlessness in the roles that you play. There’s a sort of tender approach to even funny characters; it’s something that only someone who’s really felt a spectrum of emotions can really dip into, even if it’s a short sketch comedy character. Do you approach your characters consciously with this underlying kindness, even through all the humor?

It really depends. If someone is truly unlikable, and also a part of a real world, and we’re gonna need to stomach them for a while, it’s something I have to think about more. Sometimes you do watch something and you walk away saying, “Why did I just see that? Those people were just assholes and they didn’t even do anything.” That’s a waste. One thing I think about a lot is being useful, and that entertainment should be for fun, and an exercise in feeling our emotions. For me as an entertainer, it is about finding the secret doors to having real emotional connections with people, even if you can’t even see their faces. It’s like reaching out [your] hand in the dark and knowing there’s another hand there to grab you…and not a scary hand or a monster hand. The hand of someone who’s reaching out for that connection! With Donna Stern in Obvious Child, the way that [director/writer] Gillian Robespierre and [producer/writer] Elisabeth Holm wrote that character, it was all there. It was sort of an instructional manual; I knew what to do from their direction. But for someone like Kroll Show’s Liz B., you might not want to spend an afternoon with her. I don’t know if I would. I think I have a lot of patience, but my patience level for inanity and laziness has lessened as I become more respectful of myself and other people’s time.

One thing I think about all the time with Liz and [when] creating these characters is that you should make people love them by showing how much they [the characters] are dedicated to their appetite, and how much they love their sense of self and their tastes. It’s like how you can love an animal you can’t relate to at all by watching it do something, like [the animal] deciding to go to another part of a meadow to check out the grass. It’s when you see someone make a decision for themselves out of self-preservation and love, and they really don’t think they’re hurting anybody—that’s interesting to me, and those are the things I try to highlight. Somebody’s who’s complete isn’t as important to me as someone who is complex.

Taking people on a trip, on a small fun romp, is something that I love. If I don’t like something, I just can’t make myself do it. That’s a good part of me, and a bad part of me. I’ve been working as an actress for five years, and doing stand up for 10, so at this point, I don’t have to say anything on stage I don’t like, because it’s all about me! My work is all about my life. [Laughs] It’s horrible to say, “It’s all about me,” but you know what I’m saying: The material all comes from my experience. What I really, really wish to express is the attitude of having kind of funny, naughty manners at a dinner party where the food is good and everybody’s put so much effort into it, but you can misbehave with it. That’s kind of my vibe onstage: I want you all to be here, you’re all my guests. I’m not going to throw anything at you. I’m not gonna make fun of you, but I’m gonna talk about all the ways that my body works, and how I feel about you, and how I think you feel about me. It’s all gonna accomplish the very baseline of good manners so nobody feels too uncomfortable, but it’s gonna be intimate. I think because I’ve had that in my work from the start, and then was lucky enough to have some success with Obvious Child, I don’t have to make huge compromises anymore and do things that are boring to me or work with people I that I think are disgusting, which I think did happen at the start of my career.