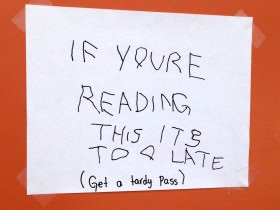 She first grabs you from behind the ears
Then rides on your coattails
For longer than you might think.

No one thinks to wash their coat after one wear.
It is in this manner that she clings—
Hangs around for weeks.

She was introduced to you in a class
By an apathetic teacher
Whose concern for your education
Measures close to the amount
Of satisfaction you might get from a single sip of water
After an extensive and exhilarating run.

Fury has a way with words.
She whispers in the same ears
She first seized.
She inspires rants of ire
That you repeat to yourself in the shower.
It contains big words
And smiting arguments.
She makes you want to shame and debase.

I don’t think she ever really leaves you.
She imprints herself on you.
She may be lurking low for the bulk
But she loves to pop up like a groundhog in spring
Whenever those tender heart strings
Are plucked with a fresh dose of disdain.

Years later, after that coat
Has been thrown in the bin,
When you hear that teacher’s name in passing,
You can still recite, word for word,
What he deserved to hear.

No. She never really leaves you.
She just burrows,
Every year still deeper.