A song premiere from surf-y rockers. 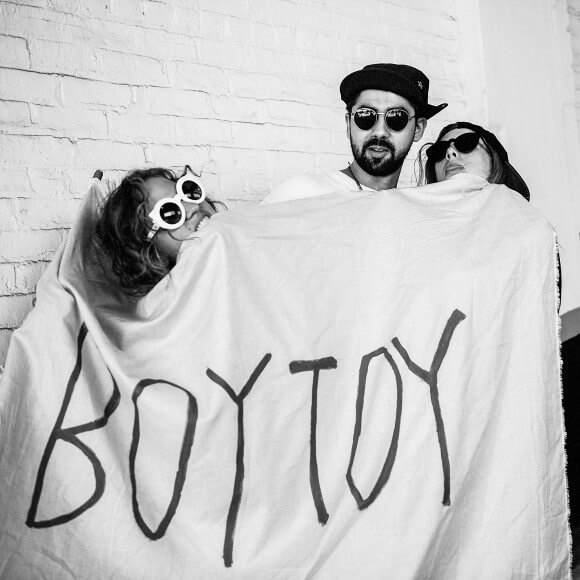 BOYTOY’s sun-drenched surfer-rock may sound like it comes from the beaches of California, but it is born in the streets of Brooklyn, New York. Saara Untracht-Oakner and Glenn Van Dyke split guitar and singing responsibilities, while Matty Beans plays drums. Together, they craft cheerful garage rock that recalls a lot of the Beach Boys’ early hits, like “Surfin’ USA,” but with a distinctly grunge flavor that gives it a laid-back feel. Today on Rookie, we’re premiering their newest single, “Your Girl,” from their upcoming full-length release Grackle:

It’s an infectiously catchy jam that had me wishing for a carefree day by the shore. I talked to Glenn and Saara about how they bonded over their love of catching waves, and how their sound is very much an outpouring of riding their boards at New York’s Rockaway beaches.

MEAGAN FREDETTE: How did the two of you begin making music together?

SAARA UNTRACHT-OAKNER: We were both in other bands—mine was called You Can Be a Wesley. It’s a horrible name for a band! Nobody remembered it.

GLENN VAN DYKE: I remembered it!

SAARA: [Laughs] Well, at least someone didn’t forget it! Glenn was playing with a band here in Brooklyn called Beasts Make Bombs.

GLENN: It was my college band.

SAARA: When Glenn and I met, we realized we liked all the same things: surfing, zombies, the beach.

GLENN: Both of our bands broke up. [The two of us] decided to start jamming at like, 2 AM, and we wrote a song, and it worked. I was moving to New York [from Boston] anyway, so I was like, “Hey, let’s start a band!” When I moved, I moved into the basement of Glenn’s old apartment, and there were rats in the walls. My basement room also doubled as our practice space. One of the first songs that we wrote is called “Rat Blood,” and it was about wanting kill all those rats.

I love the overall beach-y, sunny atmosphere of the record. How do you channel that while living in New York, amongst the garbage and rats?

SAARA: Well, Glenn and I both surf! I grew up surfing just a bit east of the Rockaways, because I’m from Long Island, New York. All of the beaches are little islands of their own.

GLENN: I grew up in Florida, actually, and the beach was always close to me. And when I moved to New York, I didn’t realize that there is a whole surf culture here—people who spend the weekends surfing in the Rockaways. Saara once said, “Hey, let’s go surf!” I remember thinking, “Uh, what?” The water is a lot colder here in New York, of course, than in Florida.

SAARA: It’s a nice recharge, very meditative. Then we come back into the city and see our friends, and we’re like, “Oh, you chumps, we were just in the water!”

Were the songs on the record written independently or collaboratively?

SAARA: Some of them were written independently! Our drummer Matt had some leftover songs, so we rearranged them. And then some songs started as a jam.

GLENN: Also, the things we grew up listening to are all over the board.

SAARA: When it comes to music, all of us have an appreciation for cohesiveness and catchiness and pop sensibilities in songwriting. We’ve all written songs for this record.

What are some of your musical influences?

GLENN: When I was in middle school, I listened to a lot of skate punk, like Guttermouth and really hardcore stuff. Then in college, I started to get really into psychedelic music. But then I was also sharing some Riot Grrrl stuff with my friends—we’d put on like, Sleater-Kinney and Hole.

SAARA: Matt introduced us to Sloan recently, and we love it. And all of us are really into the Kinks and the Velvet Underground. And the Brian Jonestown Massacre. This record is very ’90s grunge—not purposefully, but it went that way.

Because you all write songs, how do things stay fair and egalitarian—how do you avoid awkwardness in your creative process?

SAARA: We’ll send each other demos—sometimes just phone recordings, or more developed recordings. And with some of them, we’re like, “Yeah, OK, sure,” but then with others, we get very excited. I remember Glenn sent me the demo for “Wild One,” and I was like, “Holy shit, this song is awesome!” I was trying to think of harmonies for a while, and was having trouble, but she made a better demo version on her computer, and the harmonies just popped out for me.

If you could go back and tell your teen-self something that would save you a lot of future headaches, what would it be?

GLENN: Just do it. Really, just do it.

SAARA: Branch out and try different things. Don’t limit yourself to just one project. Something will feel right eventually. Things will line up and start moving ahead. And if things aren’t moving ahead, try something else and experiment.

GLENN: And most important: Don’t be scared to show people your work! ♦