Learning to be myself, unapologetically. 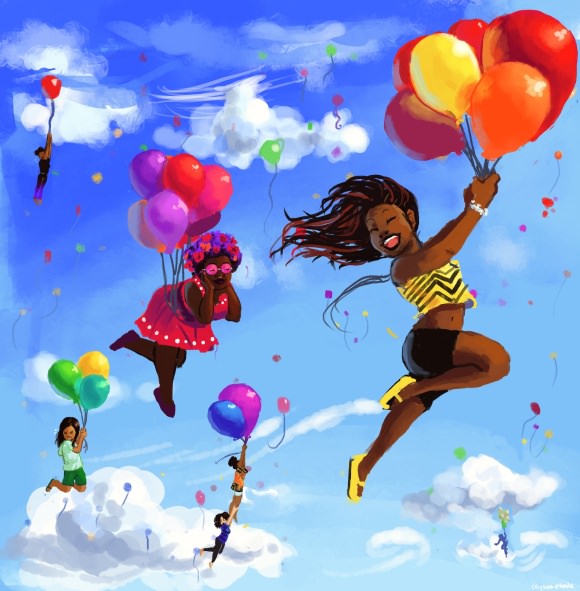 I was having a typical day on the internet, scrolling through Tumblr, when between the relatable text posts, fandoms, and pictures of stylish, artsy people and places, I saw a selfie of a black girl with aquamarine blue natural hair and bright lipstick to match. It was captioned and tagged “carefree black girl.” I was a little confused. If anything, it seemed like she was going more for an afrocentric mermaid look: What was it that made her qualify as “carefree”? Increasingly, I noticed black girls with colorful style and unashamed smiles calling themselves carefree black girls, but I couldn’t quite grasp what it could mean for me. Of course, I knew I was a black girl, but could I be a carefree black girl in the way these girls were?

Eventually, I Googled the term carefree black girl looking for a definition and saw images of black women of all sizes and complexions wearing fun patterns, flower crowns, bright lipstick, giant afros, and box braids and twists in any color imaginable. What stuck out to me was that every single one of them was smiling or laughing. They looked like they were living in the moment and genuinely enjoying life. In a judgmental world that attributes anger to black women, showing black women in this light felt revolutionary.

Before I was introduced to the world of the carefree black girl, I didn’t pay much attention to my sense of style or my attitude. As a shy, awkward teenager, I preferred to remain unnoticed and in the background. I can definitely say that a good part of my shyness during my early adolescence (something I’m still working on to this day) can be attributed to my fear of being read as the clichéd, loud, disrespectful, vindictive, angry black girl. I often let people speak over me in class discussions and didn’t assert my opinion even when I had something important to say. I’d straighten my hair an unhealthy number of times each week and follow basic fashion trends, wearing jeans, T-shirts, and hoodies in an attempt to look similar to my classmates.

Dressing to blend in felt like a means of self-preservation. I was called an “oreo” countless times, a label that made me question my identity. I often wondered, am I black enough? I was one of the few black girls in my classes, and it didn’t help that I didn’t listen to hip-hop, and that my body was comprised of more straight lines and angles than correctly-placed curves. Plus, I could have been the queen of Rhythmless Nation. I was heavily into watching and drawing anime and, worst of all, I “talked white.” It wasn’t until I moved to a predominately black school, and met girls with similar interests who were confident in their blackness, that things started to change for me. My new friends showed me that it was possible to break away from the singular labels that caricature and define black girls (The Angry Black Girl, The Strong Independent Black Woman Who Don’t Need No Man, The Jezebel, The Video Vixen, are just a few examples).

So what makes a carefree black girl? To be a carefree black girl means to fit a label that defies labels; whoever adopts it can bend it to suit whatever they want it to mean. That said, choosing to be carefree despite the racialized and sexualized scrutiny of others comes with a price. On one end, there’s the risk of still being read as a stereotype despite trying to be carefree, and on the other there’s the risk of seeming inauthentic or, god forbid, trying to “act white” (whatever that means). Being carefree as a woman is a challenge because of sexist limitations, and the racialized burdens of being black makes it even harder. For a demographic of women who are constantly pushed aside and degraded, claiming the label carefree—despite the judgments of others and the insecurities caused by those judgements—is one of the most liberating things we can do for ourselves.

One of the first and most important things I did after encountering the carefree black girl was deciding to go natural. Hair had always been a defining part of my life, and embracing my natural texture after a decade of trying to make it look like something it wasn’t, was a relief. It wasn’t that straightening my hair in itself was the problem, it was that all my life I had been afraid of the negative feedback I might receive if I wore my hair as it grew from my head. I was wary of looking unkempt, or not being as beautiful as I was with straight hair. I had to unlearn the idea that my hair in it’s natural state was objectively BAD, and that the way I chose to wear it defined me as a person.

I reminded myself of this constantly, as I transitioned to my natural texture. Doing so was the only way I was able to stick with my decision boldly. The day I decided to try out my first natural hair style—short, mini, two-strand twists—I was in the middle of junior year. Since my change of hairstyle was sudden, I braced myself for some jeers and unflattering comments my classmates and even some of my friends. However, aside from a few comments about how I looked “ratchet,” boyish, and more specifically, like Kel Mitchell from Kenan & Kel, I was pleased to discover that people were generally supportive. Gradually, I became comfortable enough to let myself experiment with other hairstyles like marley twists with splotches of red, and flower-adorned afros.

Stylewise, I’ve found most of my inspiration on Tumblr, Instagram, and Twitter; they are great spaces to find originality and community. Although social media can be a safe space for black girls looking for ways to be carefree, there’s plenty of inspiration to draw from, including carefree black women in the media. My personal inspirations include Solange Knowles, Janelle Monae, Willow Smith, Amandla Stenberg, and Serena Williams. I’ve also taken influences from ideas and things that aren’t usually coded “black,” while remaining proud of things that are. I still love the eccentric style of anime and manga, and I’ve expanded my music taste to indie pop to neo-soul, pop-punk and hip-hop.

Embracing the carefree black girl meant destroying the idea that we can only show one side of ourselves to the world, erasing the stigma of being black, and the stigma of being a girl, and claiming those identities as a source of pride and confidence. That’s far from easy. When you’ve grown up in a society that bombards you with labels and lists upon lists of right and wrong ways to act, it takes courage to stop and say: NO! I am more than what others expect from me because of my gender and the color of my skin. And that’s the beauty of the carefree black girl. You can take those negative statements and pre-defined standards and make them fit your own standard. In fact, creating and then celebrating my own standards of beauty was the inspiration for the illustration accompanying this essay. It depicts the joy that comes with deciding to become a carefree black girl, but also that everyone who decides to become a carefree black girl is at a different stage in her journey.

The countless creative looks the movement has inspired can make it seem like you have to do something stylistically daring to be a “real” carefree black girl. The truth is, you’re not obligated to change your appearance to be a real carefree black girl—but you have the option to do so, and that’s what’s so freeing. Taking inspiration from people around you can be great, but remaining true to yourself while finding your expression is crucial to finding the self-confidence and freedom of carefree black girlhood. A fashion statement that allows for the destruction of harmful stereotypes, the carefree black girl is also an embodied attitude and state of mind. She inspires black girls around the world to experiment, and to love and be themselves, unapologetically. ♦

Alyssa Etoile is an illustrator, animator, and writer based in Ann Arbor. You can find her on Twitter, Instagram, Tumblr, and wherever there are pretty colors and good music.