A video premiere, and some thoughts on the importance of giving yourself a break. 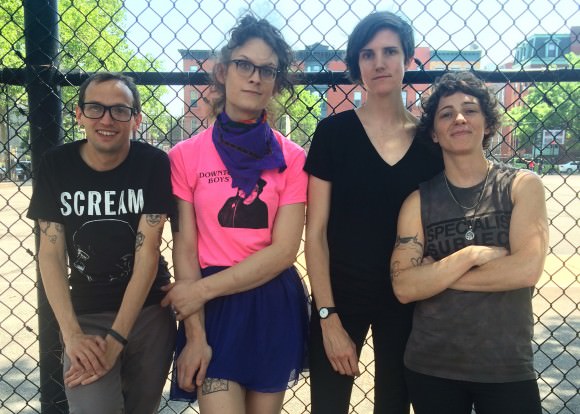 Lauren Denitzio has devoted much of their life to creativity: they make solo and collaborative visual art and zines, and write songs and sing for the Brooklyn-based punk band Worriers. This week, Worriers (the band’s lineup also includes Audrey Zee Whitesides, Mikey Erg, and Lou Hanman) is releasing a record called Imaginary Life. Last week, I skyped with Lauren to talk about the brand-new music video for the song “Most Space,” which is making its debut here:

Lauren and I also chatted about art and activism, making the most of your time, and the importance of giving yourself a break.

MADS: What sort of zone were you in when you wrote “Most Space,” and what is it about?

LAUREN DENITZIO: The song is largely me taking a sarcastic approach to something that I actually do feel serious about, [which is] the sense of entitlement and ownership over public space—whether it’s riding the subway with really inconsiderate men, or other parts of life, where you’re surrounded by people who think they deserve more, or think they have a right to your time and space.

Amazing! How did you get interested in song writing and the punk scene?

I’ve been writing songs since I was 14 or 15. I never really thought about it as a “thing” until later in high school, when I started doing open mic nights. At 16, I began frequenting punk shows. I grew up in central New Jersey, so there was a really big punk and hardcore scene. I started going to shows all the time, but it didn’t manifest itself into me being in a band until a few years later. When I first started going to shows, I was seeing bands that were just all white men. That’s it. I knew there were some bands in New Brunswick with women in them, but I didn’t really find out about them until I had already moved out of the state. There were certainly no female or openly queer songwriters that I knew of. It didn’t deter me from being in a band, but I think other people definitely had more of those opportunities to reach out to each other and talk about wanting to be in bands. It never occurred to me when I was 16 or 17 as a thing that I could do.

Do you think there is a lack of female/openly queer singers, or is there just a lack of representation?

I think a lot of things in the tri-state area [New York, New Jersey, and Connecticut] have changed for the better. I don’t think that the scene where I grew up is the same anymore, which feels really great. That’s still certainly happening in smaller scenes, though. In New York there is no lack of representation or lack of variety. But when we go play shows in smaller cities, it becomes apparent that it’s not that way everywhere. I’m glad to be able to see that changing, and to be in a band that has a mixed-gender lineup going to smaller cities.

You’re heavily involved in painting, mixed-media, and zine-making, along with music. How do you balance all of your interests and endeavors?

I tend to approach the things I’m making in terms of wanting to work on a project or in a specific medium, but it all overlaps in a weird way. I try not to compartmentalize everything, but it’s hard now that we’re touring a bit more to carve out the time to specifically make digital art or zines. It takes a lot of time management skills, basically.

What are some specific things you do to make sure that your days are productive?

I’m a really big fan of to-do lists. Lists really make me feel productive when I can check things off on a regular basis, even if it’s just small tasks like sending an email to someone or going to an art opening. Also, reminding myself that there will never be a day that I’ve completely cleared that list, and that’s OK! I need to give myself time to chill out and have fun and not always feel like I have to be productive every second of every day.

How did you get rid of those anxieties? I’m always so stressed out about productivity.

I’m still learning how to do that, too! It’s hard because I want to be doing a lot of different things that require time and effort, and it’s all stuff that I enjoy. I think you have to remember that you’re pursuing things that you’re interested in, and at the end of the day, that’s a wonderful thing to be able to do. Be honest about what you need in terms of self-care, monitoring your own emotional labor, and knowing when enough is enough. You’re allowed to watch Netflix for a while, or hang out with your friends! But I’ve always struggled with that, so I don’t know if I’m one to talk! Just try to find your own balance.

What’s the best advice you’ve ever been given?

That’s a tough one! What stands out to me now, in regard to what’s currently happening in my life, is when someone recently told me, “They are your songs.” [It was] in reference to my songwriting and the band, and in a way that encouraged me to appreciate my own work and to not downplay it. Not in a self-centered, entitled way, but just recognizing that work that [I did]. That has really stuck with me—that encouragement in creative productivity.

What themes are consistent throughout your art?

One thing that’s pretty consistent for me is dealing with this sense of disorientation in terms of one’s relationship to space and to gender. I think that a lot of my artwork and music tend to deal with themes of androgyny and queerness and a way of arranging things and building your life that is not necessarily straightforward or definable or physically describable. I try to think about what I’m writing from multiple angles.

How do you think teens can go about proliferating change?

I think young people can take opportunities they have to volunteer, although not everyone has that sort of time or opportunity. Take the time when you’re young to explore the things you’re interested in, in terms of community service and social justice. My experience in doing that really shaped how I think about activism on a local level, whether it’s local politics, social justice, resources, or having the really difficult conversations with your parents and your family or people who you meet that don’t always agree with you. Those things are what will create major change in the long run.

What are some experiences you’ve had with local activism that are close to your heart?

When I was in high school, I was part of a student-run organization called Junior State of America, and at one of the conferences we had, I invited a representative from NARAL [National Abortion and Reproductive Rights Action League] to come speak. I was probably 16 at the time, but I got to meet and talk with someone in my home state who was doing very direct pro-choice work. Through that student group, I met local politicians and people in my town who were really seeking change. That affected the way I was able to envision how things really go on in the world, and creating change on a large scale. If anything, those things made me feel like there were adults out there who felt the same way that I did about certain issues. That was very encouraging.

Do you see yourself ever moving away from New York?

Absolutely. That is absolutely going to happen. It’s an inevitability! While I love it here, it’s such a difficult city to afford, which makes it difficult to imagine existing here 30 years from now. New York is a wonderful place to be young, but it’s definitely gotten to a point where the economics of that are not worthwhile to everyone.

I would love to end up living just outside of a small city somewhere, continuing to play music all the time, make art, and collaborate with my favorite people. It’s funny: When I think about long-term goals, I just want to continue what I’m doing, but in bigger and wilder ways. I certainly worry about the future, but I try really hard to not get too hung up on it. I know how I would like things to change, but I think it’s really important to appreciate what you have going on at the moment. ♦