Why Can’t I Be You: Orion Carloto

A YouTube mastermind tells us all her internet-based secrets. 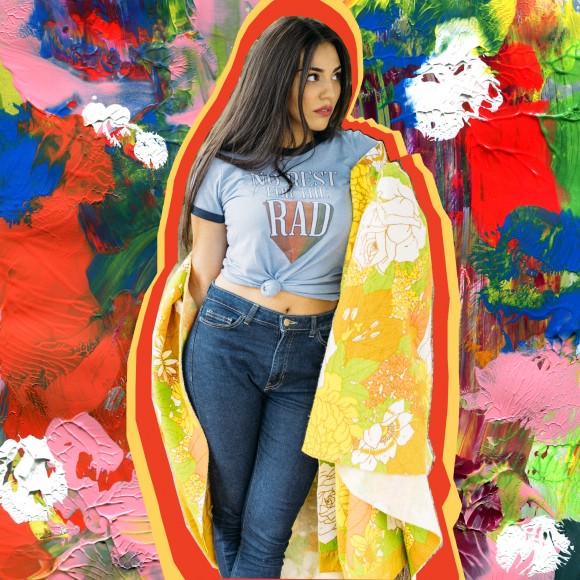 All over YouTube, a variety of kids from all over the world are sharing their lives in fun, unique ways. The site has been taken over by cool young people who have turned the platform into a community. 18-year-old Orion Carloto has become one of those burgeoning YouTube stars: The Georgia-based aspiring actress gained a huge following on a channel she shared with best friend Sam Fazz before launching her own independent videos. She just graduated high school and is at the beginning of her gap year before jetting off to NYC to pursue a career as an actress.

Orion spoke with me recently about what it’s like to make a job out of YouTube videos, her relationship with the internet, and how she tries to use her huge platform as wisely as possible. Plus, she’s got plenty of advice about how to launch your own channel, should you want to try making videos, too!

BRITTANY: Were you always into acting and performing as a kid?

ORION CARLOTO: Yes! I was very loud, and I can easily say that I was probably very annoying. Growing up when you’re this loud, annoying kid and a lot of other kids keep to themselves, or they have small groups of friends and just hang out together—no one wanted to hang out with me. I had friends, but it was hard for me to fit in with the crowds that I wanted to [be part of]. Once I got to high school, I joined theater and was surrounded by people who were just as annoying as I am! I found where I could be myself and not have people be weirded out by it.

Theater kids sometimes get such a bad rap in movies and TV, but I feel like theater communities are so close and special and inviting, especially when you’re young.

They definitely do! It’s not weird to be over-the-top. It’s such a normal thing. It’s unreal. Everyone is so supportive and close with one another. I love it.

What are some of your favorite memories of being in theater programs in high school?

Definitely the support system and growing as a better thespian and person. I know a lot of things my theater teacher taught me to do have helped me now. Especially public speaking! I was a little afraid of it, even though I was an outspoken social butterfly. I would speak really fast, and I wouldn’t articulate. Being supported, and not getting embarrassed by doing things [in theater] has helped me in everyday situations.

At what point did you decide that theater was something you wanted to pursue as more than just an extracurricular?

I always wanted to do it, but I never thought of it as a realistic goal. I was like, Oh, it would be fun to be an actress, but let’s be honest, is that going to get me anywhere? I [didn’t take it seriously] until high school when I was talking about college with my mom. I thought I would go to school for criminal investigation, because I was really into that at the time, and she said, “Do you really want to do that? You love to act. Why don’t you make something out of it?”

What’s your earliest memory of using the internet?

When I was in middle school—around 13—I used to make videos on my Flip camera. I sang in them, and it was terrible! The first one I uploaded was a cover of “Our Song” by Taylor Swift. It was unreal. Those are thankfully off the internet now!

Two and a half years ago, I started a channel with my best friend, Sam Fazz. We both wanted to start YouTube channels, but we were too afraid to go it alone. We decided to make a collab channel and be two best friends making videos, and it was super fun!

[Sam and I] have a mutual friend who is a YouTuber named Jc Caylen, and he invited us to a YouTube event in Nashville. We went together to go meet him, and after seeing the crowds of people he was attracting, and how many people enjoyed his videos and wanted to take photos with him, we really started to watch his videos more. That was the huge point where we were like, “Let’s definitely make a channel and see where we can go with this.”

﻿Can you take me through how you plan a video? They always seem so conversational and off-the-cuff. Are they improvised?

We decided to just sit down, be funny, and pull out whatever came to our heads. It wasn’t really scripted. We just came up with ideas. Most of the best ones came from when we were sleep deprived at 3 AM and thinking of the weirdest things.

Dabbling in music has been so much fun! It was just a hobby, because a lot of my friends are singers. I started trying out music last year, and I like it a lot. I think that’s something I might want to take seriously now. It’d be fun to try it out and see where that takes me for a little bit. It’s fun to experiment because it gives the viewer a nice little surprise.

Was it terrifying to hit “publish” on the first video you and Sam made? Or was it more of a relief to finally get it out there?

It was a little bit of both. After we filmed the video and edited it, we were extremely excited to post it. It became a little bit scary once comments started to arrive. We were worried people would leave hate comments, or think we were dumb. That’s the only time that we’ve ever been scared. Other than that, we were definitely really excited to start our channel!

How soon after you started self-publishing did you see a fan base start to form?

Maybe a year after we started making videos? We started off doing tags and challenges, so that brought us an audience because people would look up specific [memes]. Then they’d subscribe to our channel. We built from that and then did our original content. It didn’t really take that long.

Much like high school theater communities, I feel like YouTube communities are largely misunderstood by people who aren’t in them. What’s your experience been with that?

The YouTube community is a lot like theater in that everyone is so supportive of one another’s content. If you go to a YouTube event, everybody wants to collab and help grow one another’s audiences.

Luckily, I’ve never experienced this, but I know [YouTube] has become a competition for some people. It creates some weird tension. It’s weird to think that you can create an audience and a fanbase through posting YouTube videos. Anybody can do it. It’s wild, but it’s awesome! Everybody should try it out if they want to create videos, because everyone is always looking for new content to watch.