Why Can’t I Be You: Jasmine Solano

“Mixtapes are time capsules,” and other observations from the full-time DJ.

Head in the Clouds 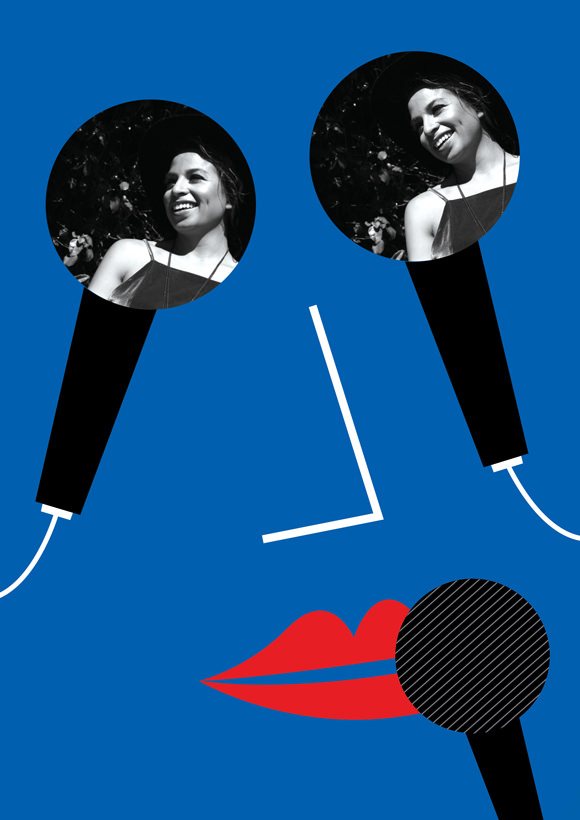 Collage by Ruby A. from a photo by Ja Tecson.

The DJ, producer, and vocalist Jasmine Solano‘s musical career seems super glamorous, and don’t get me wrong: It is glamorous. She travels around the world to do DJ sets at big music festivals and fashion shows for designers Maison Martin Margiela. She just wrapped a residency with the W Hotel chain and has even backed up Beyoncé.

Electric Punanny, the groundbreaking dancehall-meets-electro-meets-everything-else-amazing party she started in 2008 with her DJ partner, MeLo-X, has become both an underground legend and an international happening. The two friends travel the world and bring the party with them, with soundtracks that combine Soca from Trinidad with, say, house music from Lagos, Nigeria, and the latest Moombahton edit from the furthest reaches of Soundcloud.

The NYC-based Philly native works extremely hard at something that happens to be as much fun as it looks. Like anyone really cool, the markers and merit badges she has to show for her hard work are only outward signs of the grit and creativity that make achievements like hers possible. Her high school extracurricular activities were organizing variety shows and concerts to raise awareness about political causes. In college, she had a long-running R&B radio show and eventually became programming manager of her college station. At that time, she says, “I had no life.”

During a lunch interview, she told me that, before music “took over her life” in her mid-teens, she was serious about tennis. This makes perfect sense: She brings an athlete’s focus, self-discipline, and heart to creating her jams and parties. It’s all driven by an abiding passion for music—making it, finding it, and sharing it. When Jasmine is in the booth, there’s always a lot of love in the club.

BEVERLY BRYAN: How did you get involved in music?

JASMINE SOLANO: I was definitely one of those kids that was always performing. My mom raised me on classic soul. I have a Fisher-Price tape where I’m singing James Brown. I started ballet, tap, and jazz dance, then really got into hip-hop. In high school I was part of a hip-hop dance crew and a breakdancing crew.

When I was 15 or 16, music took over my entire life. I was actually playing tennis very seriously from the age of nine, and as a teenager, I was at a crossroads where I had to decide if I was going to pursue sports or music. I chose music.

I asked the band teacher if I could use the practice room when he didn’t need it, and he let me because he was so cool. I was never in band. I had my drummer friend and my other friend who beatboxed come in, and we made up these medleys.

I was really just a sponge, learning about different kinds of music. I was singing a lot. I was doing open mics. I was also getting very into turntablism. I watched reels of people like DJ Qbert competing at the DMC World DJ Championships. All the money I made working went to the local record shop, Siren Records. My friend Shael ran the whole hip-hop section of the store, and he was the one who really got me into DJing.

When did you know you really wanted to pursue being a DJ?

DJing on the radio in college led to DJing outside of the radio station. When I moved to New York after college, I was full speed ahead, DJing in the clubs and at parties. That’s grown to big events and festivals, but, when I first saw what people were doing with turntables as a teenager, I thought if I could be a DJ, then that would be the coolest thing ever. I worked at a coat check to buy my turntables, and the DJ at that club was so cool—he would let me DJ a little before people started coming in.

Is promoting yourself an important part of your job?

That brings us to Electric Punanny. How did it grow into what it is?

That’s my wild baby that’s now seven years old! MeLo-X, who is now my bonafide brother, and I had already been DJing together in clubs. I don’t know how we decided that we were going to be best friends, but I also don’t remember us not being best friends. We were just DJing together all the time. We’re really likeminded—he knew how much I love reggae and dancehall and he came to me and said, “I really want to do this party where dancehall and reggae meets electro.” I was like “Yeah, I’m down. Let’s totally do it.” We started doing a monthly party, and it got to the point where 300 people were trying to get in on a Monday night and the cops came. I thought, OK, we have something special here.

Did making original music as Electric Punanny grow out of what you were doing together as DJs?

Totally. MeLo and I have both been solo artists in our own right as well as DJs. We’ve both put out music, so it was only natural that we would combine everything we have into Electric Punanny and do the same thing. We released our first single at the end of 2014—“Rosa Caleta,” which is named after a Jamaican restaurant in Berlin that we adore—and we have a lot cooking in the pot now.

Is there a political or social philosophy to Electric Punnany?

As long as the women are happy, the world would be fine. That’s our one message. We want to be for the females, but there are a lot of guys who come too. It’s about people coming together from all walks of life and letting loose and getting an education and exposure to music they may not have heard before, because they know it will be good quality. Our taste has spoken for itself over the last seven years. Not only are we going to be feeding you songs that you may not know, but they’re going to be from all around the world and we’re going to be doing it in a way that you are going to love.

How do you find new music?

It’s a combination of people I meet and conversations I have, as well as hours spent on the internet, diving into Soundcloud, and sifting through and reading about music. I’ve been on the weirdest blogs. You have to do the research, and one thing leads to another, but, also, in my travels, a lot of the people I know will put me on to different artists.

What are the pros and cons of being part of a team?

If you team up with someone, that just has to happen naturally. You two just have to vibe so well that you say, “Let’s do this together.” If you try to force any type of creative collaboration it’s not going to work as well.

What does an ideal work day look like for you?

There are two types of work days. If I’m on tour, a typical work day could be driving into Glastonbury, getting our artist passes, getting our rain boots on, doing a sound check, and walking around the grounds to get ready for our big performance the next day. On a day in New York City, where we’re in the middle of the grind, I love waking up early and getting in some type of workout. Then I sit and do my email, then take a couple of meetings and maybe have a studio session, hopefully have some dinner with friends, and DJ an event at night. That’s a busy day, but it happens a lot.

What are you typically thinking about during one of your sets?

The only thing I can compare DJing live to is playing a sport. You’re not thinking about much; it’s all instinct and reaction. You go into performance mode, which is a whole other level of conscious being. You have to change a song quickly; you have to know what song you are going to play. Am I going to get on the mic? What am I going to say? I just let it all take over.

How do you prepare for sets?

I go in and read the crowd as quickly as possible, and then I freestyle my entire set. It’s about having a musical encyclopedia in your brain. You have to play a mix of what you want to play and what you know will get them fired up, which differs depending on the event. If I’m at a festival, people want to go crazy. If I’m at a lounge, I can play some trippier, more experimental stuff, because people want to vibe out. If it’s a fashion show, everything has been curated before I even set foot inside the building. If it’s an Electric Punanny party, it’s about us doing our thing. They’re there for what we do.

What goes into curating the music for fashion shows?

When you do a fashion show, it’s not about you, but it can be a collaboration. Once, the designer and producer had six songs that they wanted and asked, “What else would go well in this mix?” It really is all about the vision of the designer and the producer, and then they come to you to mix it properly, DJ it live properly, or add something to it that will work with the vibe they’re going for. A lot of younger designers will let you take chances and play some underground stuff, which can be so much fun. I like going to fashion shows and hearing something I don’t know.

Electric Punanny regularly puts out mixtapes, and so do you as a solo DJ. What makes for a good mixtape?

Oh my god, mixtapes are my works of art. They’re my masterpieces. I get very attached to my mixtapes. It’s all the music I love at the moment mixed in a way that’s so fluid that you’re going to play it over and over again. Mixtapes are time capsules, and they’re the easiest way to really tell you what I like musically. The art of putting music together that has no breaks makes, like, a little movie, or a soundtrack.

Being able to tour internationally and play major festivals and really great venues around the world with one of my best friends because people want to hear what we do. I don’t think there’s anything better than that. When I sit back and realize we just headlined Island Vibe Festival on a beach in Australia in front of thousands of people, it’s like, How did this happen? What is life?

Our goals are even bigger than what we’ve already done, but I try to make sure I’m looking at the process and not getting too caught up in where I want to be. I don’t lose sight of my aspirations, but I try to not worry about how fast or slow it’s happening, because I don’t want to miss these years. ♦

Beverly Bryan is a writer and editor based in Brooklyn who contributes to Noisey, MTV Iggy, Village Voice, and some other places. She also edits song recommendations at Soundfriend.net. In her free time, she enjoys punk shows, comics, and playing basketball by herself or with a friend.