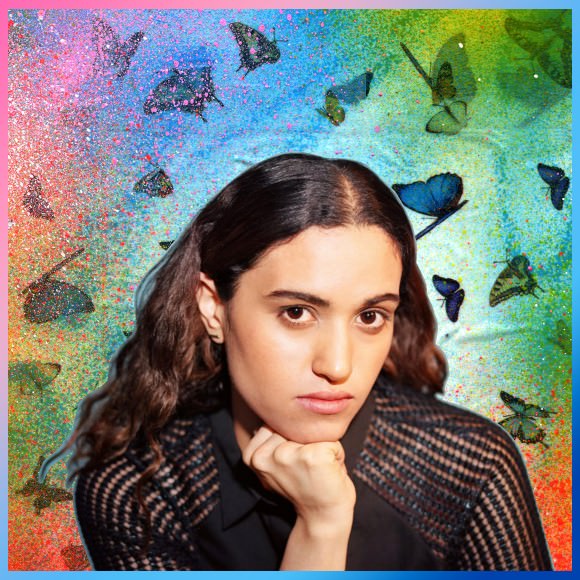 The performer, songwriter, and producer Lorely Rodriguez, aka Empress Of, is in the middle of some big firsts. Not only is her debut album, Me, coming out on September 11 va XL Recordings/Terrible Records, but she just recorded her first-ever cover song, Katy Perry’s “Hot N Cold,” in celebration of this month’s theme, Give + Take. We are SO excited to GIVE to you what we’ve TAKEN from her brilliant production and vocal stylings (and, by extension, Katy Perry):

As Empress Of gets ready for a big career step with the release of Me, she told me all about covers, how she learned to make beats, and taking control of your music. For more EO, follow her on Twitter, Soundcloud, and Facebook!

BRITTANY: What drew you to covering Katy Perry’s “Hot N Cold”? Are you a huge fan of hers?

EMPRESS OF: I love her. She’s brilliant! I was thinking of songs [to record for the theme], and I was like Oh, I’ll do Johnny Cash. Then I thought about doing something direct, to the point, and really fun to cover. As an artist, I’m generally drawn to very obvious things, hence calling my album Me.

Playing a cover is a cool way of giving and taking. Do you do a lot of covers as an artist?

This is my first one ever! It was nice to remove the pressure of personal attachment and just have fun with a cover.

That’s awesome that you launched into writing and performing your own songs! When did you start making your own music?

I started making music when I was 13. I got my own laptop when I was 17 and started making beats on it. That’s when I was like, This is really cool and personal—you can make any sound that you want to make. I really like that aspect of it: being in control of the sound.

How did you train yourself to make beats?

I downloaded all these programs, like Reason. I started making beats on that. I studied music production in college and learned a lot about recording techniques. It’s really sick, because I can make a whole entire album completely by myself. Or I can make other people’s albums, which is something I want to do outside of my own music. Producing music for other people is what I really want to do.

Sometimes I’m in denial about the lack of women who are on the technical side of music. I always try not to have the conversation, because I want [the existence of nonmale producers] to be the norm. But then I look at festival posters, or go into a meeting on the industry side with a label or company, and I realize I’m the only woman in the room.

There’s something really powerful about being the architect of your music, or even other people’s music.

Yes! This is my first cover. I’ve never made my own version of someone else’s song before, and it was so fun. Katy Perry’s music is super pop and [has] awesome choruses, so it was great to put my weird little production spin on it. Like, What would I do if I were Katy Perry? That’s kind of the same mindset when you’re producing for someone else: What would you do with their music?

Whom would you love to produce?

I would love to work with Azealia Banks! I’m so obsessed with her. If I could throw a beat at her…she could literally read the newspaper over a beat I made, and I’d be so happy. I’m so stoked on her.

You’re about to release a really personal album. That’s another kind of give and take, now that you’ll be sharing these parts of you publicly.

Totally! The world can take it if they want to. My process was being vulnerable with the way I made this record and what I talked about. I put myself out there—let’s see if anyone takes it! [Laughs] ♦